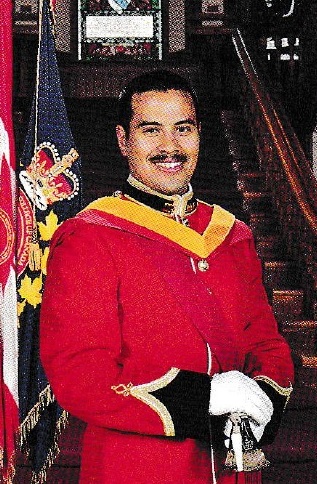 Richard comes from a solid hockey background. He played three years for the Calgary Canucks in the Alberta Jr (A) Hockey League;  played 4.5 yrs for the Paladins and was team  captain in 2010-2011.  Following his playing days he was Assistant coach from 2011-2013.

We asked Richard to share a couple of highlights:

“In the short time I have been the head coach at RMC, there have been a couple of highlights that have stood out.  The first is my first game as head coach in Nipissing.  We trailed 4-1 going into the third period and came back to win 6-5 in OT.  Wining our first game with me behind the bench was great.  But what I really remember was the pure elation of the team in the dressing room after the game.  The team hadn’t recorded a win the season before, so I believe it was something like 13 players first every USPORTS win.  So to share that with so many players was a great experience.”

With even more enthusiasm, the energetic coach, with two years of head coaching experience added: 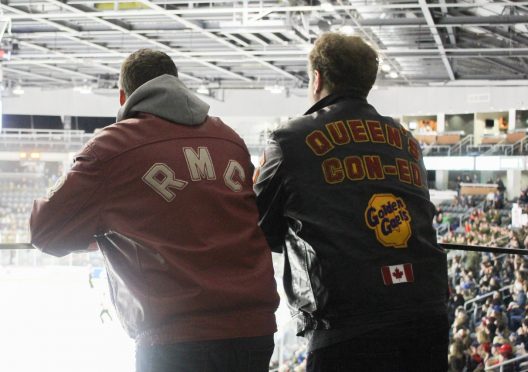 “The other memory that sticks out is obviously my first Carr-Harris cup win as a coach this year.  Again the victory sticks out for a few reasons.  First off, we were really shorthanded with 3 regulars missing from our lineup, loosing another in game and having 2 players suit up injured.  So it was  really gutsy performance by our guys, and the score didn’t do the game justice as we gave up 2 late goals to make it a 3-2 win, even though we lead the by 3 and out played Queens for most of the game.  It was also special for our graduating players to go out winning their last Carr-Harris, in particular, Eric Bouchard, our captain, who underwent knee surgery the following Monday, so it was his final game in his great hockey career. A really special memory for all of us.”

The topic of the unique challenges of coaching a RMC varsity team was covered in our talk.

“Having been part of the program from all sides, Recruiting remains the number one challenge at RMC.  We are able to generate a lot of interest from great hockey recruits, but the length of the application process and inability to guarantee acceptance to interested recruits is still a challenge.”

He added a rider.

“But I think our current recruiting plan and the information about the college and recruiting process we are looking to provide to potential recruits and different teams will help ease some of the problems we have faced in the past.”

We talked about – down the road. What are the plans?

“One of the big non-hockey initiatives that we as a staff, and recent graduates are looking to do is to re-involve the RMC Hockey alumni into the program.  With a few involved alumni, we are looking at rolling out a few different initiatives this summer that should help re-connect the alumni with other alumni and the current roster at RMC.  So if any alumni (former Redmen and / or Paladins) would like to be involved please don’t hesitate to contact me.” [email protected]  613-541-6000 x6377

We are in the midst of an important transition for RMC Paladins Hockey. We made great strides over the past two seasons towards becoming a competitive team that has a chance of winning every single night. This upcoming season, we look to build on this momentum and make our first playoff appearance in over a decade.

In addition to our regular challenges, we are losing seven graduating players.  This past season was bittersweet as we lost arguably one of the strongest leadership groups in program history, including Alex Pym, Eric Bouchard, Mathieu Lavallee, Mitchell Hewson, John Livingston, Aidan Orbinski and Matthew Murphy.  While it will be impossible to replace a group like this, we are endeavoring to recruit leaders who will compete every night, do whatever it takes to win, and represent the College well on and off the ice. We will add players at every position to increase our depth and competiveness in pursuit of a playoff spot.

At this time, six recruits have accepted conditional ROTP offers to add to our returning players.  We are very excited to welcome Nick Boddy (Trenton Golden Hawks), Nick Gibson (Dieppe Commandos), Tom Fingler (Kanata Lazers), Parker Krol (Cornwall Colts), Nick Bissonnette (Kemptville 73’s), and Cameron Lamport (Lindsay Muskies) to the RMC Athletics program.We remain hopeful that we can add a couple of important recruits in the final month of officer-cadet selection. We are looking to ice an entire roster of players that have at minimum Tier 2 Junior A experience before lacing up for the Paladins. While this ROTP recruiting class is the largest in quite some time, we still faced hurdles in acquiring some identified recruits. Hurdles outside the program’s control are still the toughest element of our recruiting plan. Educating Junior A coaches and teams about the process has definitely helped, and the addition of Colin Birkas to the coaching staff will bolster our recruiting reach and potential. We are very excited about our incoming recruits and the recruiting plan in upcoming seasons.

Last season at this time, we believed we would be able to take the next step and pole-vault into the postseason. We did not anticipate the change in mindset of other teams we played against.  Unlike previous seasons in which teams rested top players and prepared for their other weekend game, our opponents prepared to play and gave us everything they had night in and night out. While we are disappointed with our final spot in the standings, we think our 12 one goal games speak volumes about our progress this past year.  Our goal is to secure a playoff position this season, which is in line with our development plan.

“Richard has really changed the culture around the RMC hockey team since he came on board,” says Darren Cates, Director of Athletics, “not only has the team increased its competitiveness, the team is more active off the ice on campus and in the community.  I am really looking forward to where our team is headed under Richard’s leadership and to see the caliber of recruits that he is bringing to RMC”

More on one of the hockey recruits: Cameron Lamport (Lindsay Muskies) – Here

Sean McDonaugh - Much more than a rugby coach