“My colleagues from the College are my most valued resources” 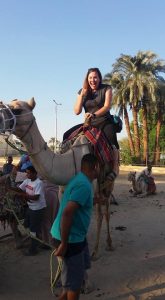 25419 Melisssa McCoy (RMC 2012) is still in the CF a decade after she joined and still working as an Air Log Officer. “I have just recently returned from a year in Egypt working as the Task Force Adjutant and right now I’m in transit to Borden to work as a course director at CFLTC.”

The Kingston, Ontario, native was posted to CFB Bagotville following graduation to work at Wing Supply. “I was then posted to 2 Wing Bagotville in 2014 as the 2 Expeditionary Readiness Centre Finance Office, during which time I was fortunate to work as an Observer Controller Trainer (OCT for Ex Maple Resolve 15. As an Observer Controller Trainer I got to write scenarios to test the readiness of the deploying rotation. It was super rewarding to see how well the Logistics branch did and be able to say with confidence that they were ready to deploy.” As she went on, “I then moved to 2 Air Expeditionary Squadron in 2015 where I worked as the Sqn Fin O for 2 years before deploying to Sinai, Egypt, in July 2017 as the TF Adjutant.” 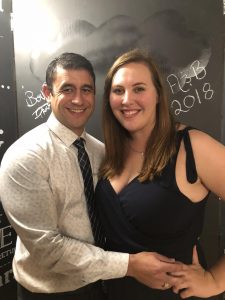 “Egypt was an amazing experience,” she said. “I worked out of my comfort zone doing a lot of administration while employed as the Adjutant (Administration/Finance Officer). I had an amazing team to work with which made the year lots of fun and go by quickly. I did a lot of travelling (Kenya, Spain, Portugal, Greece and Uruguay) while I was there because everything was so close, which I hadn’t been able to do before then, so that was a highlight. I also met my boyfriend Robert while I was in Egypt, he is from Uruguay and was also deployed at the time.”

Melissa McCoy credits RMC with preparing her for her career as a Logistics Officer by instilling in her the importance of networking. “I’m coming to find that my colleagues from the College are my most valued resources,” she said. Perhaps not surprisingly then, what she remembers most about the College are the friends she made along the way. “I was a varsity volleyball player and I still get together frequently with most of the girls that I played with, as well as a core group of friends from 12 Sqn. I look back fondly now (although not so much at the time) to FYOP and think about how much it helped to build me as a person and bring our flight together. The guys that I spent 4 years with are the kind of friends that you don’t have to see all the time but when you do it’s like you were never apart.”

“Just about every base that you go to for a course or a posting you can find built in friends that you knew from your time at the college,” she went on. “It makes travelling and settling into a new place so much easier when you have friendly faces around that you can reach out to.”