At this time, I am posted to the 1st Canadian Division Headquarters and filling the role of Staff Officer / Executive Assistant to the Commander; I was posted here in August 2018, from 2nd Regiment, Royal Canadian Horse Artillery, following a 6-month deployment on Operation IMPACT. My wife, Cathrine, and daughter, Alannah, are living in Kingston ON.

Although born in Oshawa ON, having lived in Yarmouth NS, Bowmanville ON and Oshawa ON, I consider Courtice ON to be my hometown, as a graduate of Courtice Secondary School in 2008.

Not from a military background, I’m sure joining the military may have come as a surprise to some family members. However, as a proud member of the 151 (Chadburn) Royal Canadian Air Cadet Squadron, I learned a minute amount about the military and recognized it as a potential career path. I discovered the Royal Military College of Canada to be a prime choice to gain the education required to be an officer. Although accepted to other universities, I accepted the offer to enter the Royal Military College of Canada in 2008 due to the wealth of training and experience that I would not otherwise receive at a civilian university. 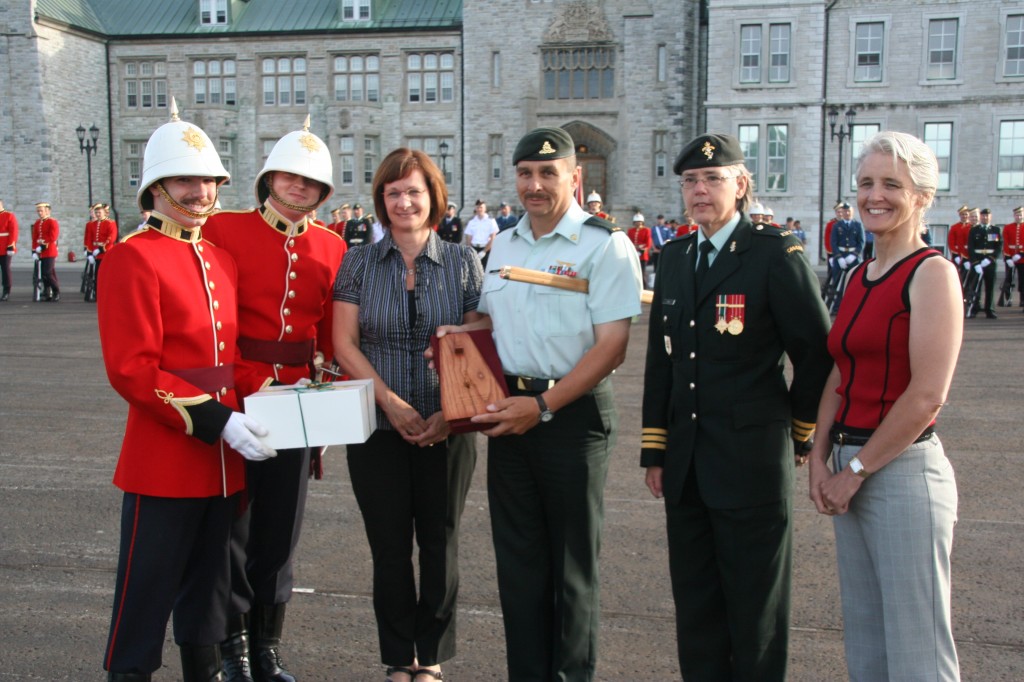 There are four favoured memories that come to mind when thinking back about my time at the college. First is the great opportunities I had to take part in Canadian Army (or, “Land Force”) exercises with 33 Canadian Brigade Group on Exercise Wolfpack Endeavour in Kentucky and with 5e groupe brigade mécanisé du Canada on Exercise Rafale Blanche in Quebec; I enjoyed the chance to step-away from the College to experience a taste of “Army” before graduation. One year, a couple friends and I travelled down to the United States Military Academy at West Point to spectate at the Sandhurst Military Skills Competition; I cannot remember whether it was one of the many years that the RMCC team won the competition, but I can definitely (or blurredly) remember the post-competition festivities; it was a good celebration and opportunity to converse with military students from other countries. Lastly, I recall the privilege I had to attend the Vimy Award Gala Dinner thanks to the generosity of the Royal Canadian Artillery Association; it was a high-class event with some very notable and inspiring attendees. 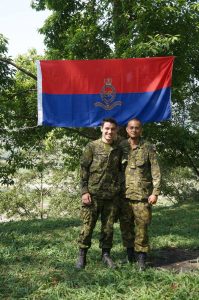 When asked what my biggest challenge was at the College, I have no hesitation in its choosing. Although I had not failed any courses, I was struggling in First Year arts and volunteered to be transferred to preparatory year at the Collège militaire royal de Saint-Jean following my first semester in Kingston, along with nine other students. Back in Kingston eight months later, I was faced with two significant stigmas: I was seen as a failure for seeking a reversion from first year to preparatory year, and, at that time, there was a significant stigma around people coming from Saint-Jean to Kingston. Not feeling welcome at the College led me to administrative and disciplinary issues. It wasn’t until seeing my original classmates in their third year being granted positions of leadership and respect that I realized I wasn’t performing to my greatest potential; this led to a change in my outlook and behaviour. It was with this new mindset that I was able to succeed; as a Fourth Year Cadet I spent the fall as a Cadet Division Training Officer and the summer term as the Cadet Wing Training Officer.

I recall three particular staff who left an impression: Captain Kevin Schamuhn, who was an exemplary Squadron Commander and role model for Cadets; Lieutenant-Commander Roman Antoniewicz, who provided great support and leadership as a division commander; and Dr. Bryan Paterson, who was a phenomenal professor of economics, skilled at breaking-down the most complex material for ease of learning.

I graduated from the college in December 2012 and was posted to the Royal Regiment of Canadian Artillery School in Gagetown NB for my Artillery Officer Qualification courses; while awaiting training, I enjoyed a couple of months as the Administration Officer for the Para Company at the Canadian Forces Land Advanced Warfare Centre (now Canadian Army Advanced Warfare Centre). Upon qualification, I was posted to the 2nd Regiment, Royal Canadian Horse Artillery. I spent time as a Troop Leader and Troop Commander within E Battery before moving to F Battery and spending time as the Miniature Unmanned Aerial System Troop Commander, the Surveillance and Target Acquisition Coordination Centre Officer, Battery Training Officer, and Battery Captain. The highlight of my posting to the Regiment was the six months I spent entrusted to be the Acting-Battery Commander of F Battery; it was an outstanding opportunity and privilege to command the battery, and I definitely look forward to more opportunities to command in the future. 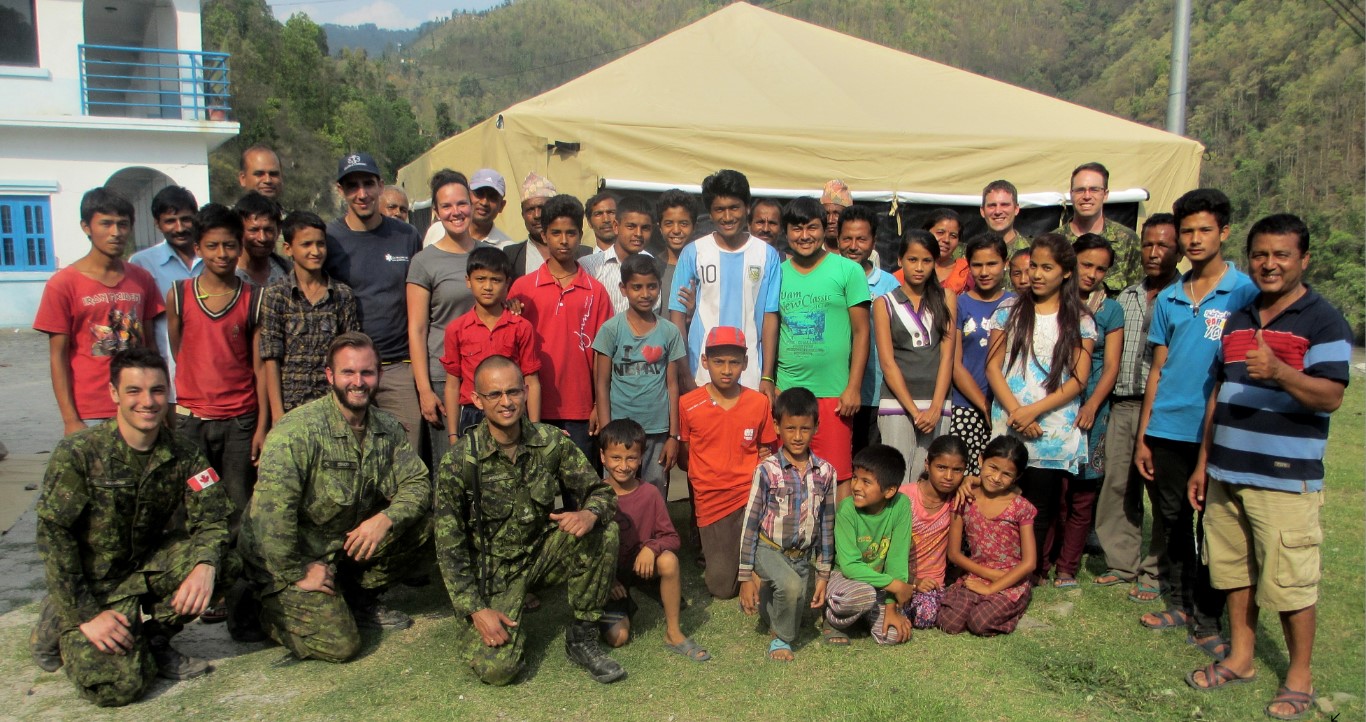 In 2015, following the devastating 7.8 magnitude earthquake in Nepal that killed nearly 9,000 people and destroyed significant infrastructure, I deployed as the Defence and Security Platoon Commander on the Disaster Assistance Response Team. It was a remarkable experience being able to contribute to the relief efforts and witness the 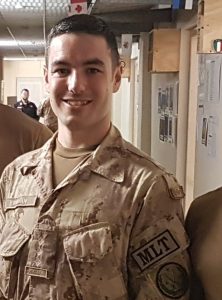 incredible resiliency of the Nepalese. The most memorable moment from my military career thus far comes from this deployment. Specifically, it was a remarkable opportunity and experience to assist the Nepalese, to witness their devastation within their beautiful country, and to physically feel the effects of a 7.3 magnitude aftershock and observe the immediate landslides and other destruction. In 2018, I deployed to Kuwait with the J3 cell at the Joint Task Force-Iraq Headquarters, and spent some time in Iraq with the Combined Joint Task Force – Operation Inherent Resolve as the Operations Officer of the Ministerial Liaison Team.

I fully admit that I am terrible at maintaining communications with friends, classmates, and co-workers. However, whenever afforded the chance, 25377 Captain James Ward (11 Sqn), 25245 RCMP Constable Chris Veinotte (5 Sqn) and I work around our schedules to reconnect and reminisce. Despite not actively maintaining other connections, potentially the greatest advantage of graduating from the College is the vast network of classmates across the country; the experiences shared at the College enable us to reconnect as if little time as passed.