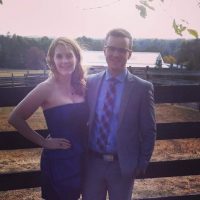 Andrew Sheahan and his wife Caitlin.

25490 Andrew Sheahan (RMC 2012) is currently posted to 424 Sqn in Trenton, Ontario, as a Search and Rescue ACSO. He married his wife Caitlin in 2010, while he was a Cadet and she was a student at Queen’s, and together they spent two years in Winnipeg before coming back to eastern Ontario where they plan to settle now that he’s releasing from the Air Force.

As he explained, the decision to release wasn’t an easy one. “I am currently in the process of releasing from the Forces with a release date in January 2019. I have enjoyed the journey and I know I will miss the military family a lot. I’m already looking back on RMC, recent search and rescue missions, a deployment to Kuwait, and my current position flying and instructing on the CC130H (legacy Hercules) and I know I will miss it all.” He went on, “As my current supervisor 24212 Maj Melissa Dawe (RMC 2008) has pointed out, there are so many stories to tell that there will never be enough time!”

So then why make the decision to leave? “I am leaving the RCAF to follow some other dreams,” he said. “I am planning to purchase a small business in Quinte West and will be taking advantage of the Veterans Education and Training Benefit to pursue a career in finance – stay tuned for future details!”

Capt Sheahan has had a very busy career to look back on. What he remembers the most, he said, are the many Search and Rescue missions he’s flown. “The one that really stands out was a subarctic rescue. After searching for a missing hunter for two days in terrible weather, we reached a critical fuel state and were preparing to return to Yellowknife when we received a call from one of the helicopters involved in the search. The helo crew had found the hunter and he was alive but in a critical condition. They were worried it would take several hours to return to a fuel cache and get the patient to the hospital in Yellowknife. In just a few seconds, we discussed our options and decided to meet the helicopter at Gacho Kue, a diamond mine. Knowing that the CC130H would save hours of transit time for the patient, we pressed on to the mine. In minutes we were on the ground with our engines stopped, waiting for the helicopter to arrive. When the patient was transferred, the Search and Rescue Technicians went to work stabilizing him and less than 40 minutes later we were met by an ambulance in Yellowknife. It’s been an amazing feeling working with the professionals in the SAR community who spend their lives training to help Canadians in distress. Rescue!” (CBC article on that rescue here.)

He credits his time at the College with preparing him to serve in such a demanding role. “Any challenges I have had to face in my career or personal life have been made easier with the support network we have developed within the military community that began with friends at RMC,” he said. “I think that the friends you make as a Cadet are one of the most important parts of the entire RMC experience. No matter where you go in Canada, there’s a strong network of friends to see and catch up with.”

“The other thing that has served me well,” he explained, “has been the ridiculous level of time management you learn at the College. RMC makes it necessary to do a lot of things in very short periods of time and when you can’t get everything done you’re forced to prioritize. I think a lot of schools have this in common but RMC seems to have a unique way of making Cadets work efficiently.”

The people are what Capt Sheahan remembers the most about his time at the College. “While you might not be totally aware of it at the time,” he said, “the College is all about building friendships that last for a lifetime. I can’t believe how often I’m bumping into classmates I haven’t seen in a couple of years and it always feels like we’re picking up a conversation we were having yesterday.”

It’s not, however, just the Cadets that he remembers so fondly. “I will always remember the time I spent at the Old Gym with the fencing team and Coaches Dave and Patti Howes. CISM was one of those amazing experiences you get in the military, including trips to France and Venezuela to compete against and train with other military teams. Finally, I will always remember the amazing faculty, especially in the English department (to whom I’m forever grateful). I don’t think RMC would be the institution it is without the outstanding, passionate, and unbelievably patient professors!”

Making, Breaking, and Re-Making the World