“I wanted to be an infantry officer” 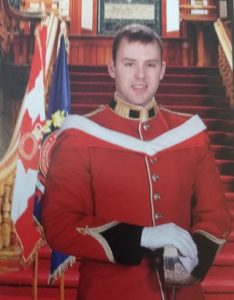 One of the things I remember from my own time as a Cadet is finding out another Cadet’s military occupation (MOC) and thinking, “That fits.” Some Cadets just seem born to the occupation they choose. When I recently reached out to my FYOP DCFL, 24592 Jeff Caselton (RMC 2010), for example, it didn’t really come as much of a surprise to find that he is enjoying his duties as an infantry officer. The Manitowaning, Ontario, native is currently posted to the 2nd Battalion, The Royal Canadian Regiment, as the Operations Officer. “I wanted to be an infantry officer,” he explained when asked why he chose RMC, “and the college offered the fastest means available to achieve that goal.” He applied in 2006 through the Sudbury, Ontario, recruiting centre, was accepted, and spent the next four years in Kingston.

As an arts student at RMC with a “very liberal” schedule some of his favourite memories “would have to be exam season; the reduced standards on all fronts was a welcome change of pace.” When asked what he found the most challenging part of his RMC experience, Caselton joked, “That last answer was a good hint. I found the academic pillar to be the hardest.”

Caselton credits RMC with helping to prepare him to fulfill his goal of being an infantry officer. “I met some great infantry officers who were brought in to help run some of the end year military training preps (the three weeks just prior to departing for courses),” he explained. “They taught me some great staffing/planning tools that really helped in the first couple years with the battalion.”

He hit the ground running after graduation in 2010. “I was posted to the infantry school to finish Phase 4 (DP 1.2 now),” he said, “after which, I was posted to the 3rd Battalion of the RCR where I served as a rifle platoon commander, OC Recce, and Company 2IC. I then spent a couple years on brigade staff in the plans cell before moving to 1 RCR and serving more time as a Company 2IC. I was posted into my current job as Operations Officer of 2 RCR in the summer of 2017 and I have been here since. I have deployed twice: one tour to Israel for a year, and recently a tour to Latvia for six months.”

It is these international exercises which he has enjoyed the most. “Exercises with the 82nd Airborne and 18th Airborne Corps surveillance and recce assets while I was OC Recce at 3 RCR seem to stand out,” he said.

On a personal level, Jeff is engaged to be married next year and is enjoying life with his fiancee and his dogs.