While the Cadet Wing spent Labour Day weekend relaxing and trying to squeeze the most of the summer weather, FYOP continued at a breakneck pace for the Class of 2021. As they entered Week 2 of the month-long orientation program, the level of physical and mental challenged increased as the 12 first year flights continued to bond.

With the RMC obstacle course quickly approaching, FYOP’s third and fourth staff continued to forge bonds within their flight and challenging their cadets to reach and exceed their perceived limits. One of the true lessons of FYOP is that one often underestimates their own limits.

The Academic Staff at RMC is second to none. Whether an OCdt chooses an arts, engineering or science field of study, they will undoubtedly be taught by world class experts. Furthermore, given the small classroom sizes, OCdts have ample individual attention and a team of highly capable professors to help ensure their academic success.

With the beginning of classes, the Class of 2021 is starting to get a better taste of what normal life is like at RMC. Additionally, many of the first year cadets are involved in varsity sports, which further instills a sense of belonging to the College community.

On Saturday, the first years joined the rest of the Cadet Wing at RECSPO, an event where the College’s diverse clubs present themselves and recruit new members. RECSPO also featured a barbeque and gave the first years one of their only real chances to interact with other members of the College prior to the end of FYOP. 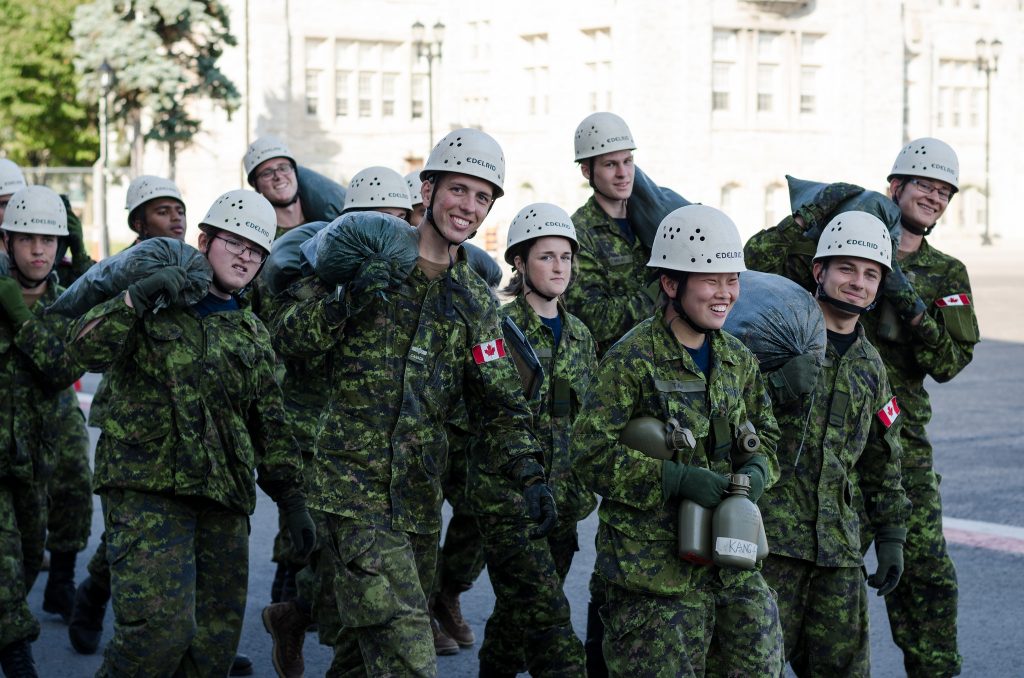 I first heard about RMC from a teacher at my high school, and I immediately knew that it was where I wanted to pursue my education. The multiple areas of learning that Cadets at RMC experience make it a university above any other in Canada. The guaranteed job and no debt were also very identifiable as factors in my choice to attend RMC.

As a person that strives for success, the constant no win situations of FYOP are quite challenging to me personally. In a more favourable aspect, the bonds that have been created by the shared hardship of our flight will surely last a lifetime. My favourite part of FYOP is the addition of the new brothers and sisters to my family.

The experience of FYOP allows an Officer Cadet at RMC to begin to learn how to react and respond in stressful situations. True character, and true leadership are most easily exposed when pressed, and FYOP is surely the most ‘pressing’ experience that most of the first years have ever had in their lives.

To me, teamwork means doing whatever it takes for your team. The whole is greater than the sum of its parts and whatever any of us could accomplish individually is multiplied tenfold when we work together as a flight. For the first few days of FYOP, many of us simply worked on our own things, not helping each other. However, after multiple missed timings and lengthy PT sessions, we learned that by working as a team, we accomplish much more. It does not matter if it’s encouragement during morning PT, or inspection prep, as a flight, as Merritt Flight, we can accomplish anything.

I heard about RMC while in the air cadet program. It really caught my attention as I grew up, due to my ever-growing interest in the military. The need to pursue a lifestyle that revolved around physical fitness, academic growth and family bondage became the motivation to coming to RMC.

The most challenging aspect of FYOP so far is having the ability to balance the physical and psychological stress that the program induces, as well as the importance of maintaining your three Cs (calm, cool and collected). My favourite aspect of FYOP has to be the team-building aspect of the culture at RMC

To able to follow through with FYOP proves to an individual how they manage under stress, as well as to what edge does their physical strength peak and mental resilience withstand. It builds the necessary leadership qualities that you’ll need in your aspiring career.

Teamwork means everything during FYOP. It is the essential, critical tool that will get you through day by day. Tasks cannot be accomplished without teamwork and it is the main focus of the course. Coming from BMOQ in our own separate platoons, now separated and scrambled with new people, it was a quick, yet difficult path to form a fully functional team. Through trial and error we’ve had the opportunity to learn each other’s strengths and weaknesses and grow as a team from them. Coordination, communication and consideration are a few words that our flight has emphasized when working together. Together, we’ve overcome obstacles and learned to become closer.

I heard about RMC from CFRC Toronto when I first applied for the CAF. I decided to pursue an education here because of the military and bilingualism pillars at the school. I wanted to receive professional military training while I am receiving a full-time education. Bing bilingual would also help me be a better officer in the future.

So far, the most challenging aspect of FYOP has been the physical training. The intensity and frequency of PT is much higher than I am used to. Being sleep deprived and constantly moving also pushes my body and presents a hard challenge. My favourite part is the military training. It is interesting and good practice for the future. I find it especially interesting as my occupation is infantry.

FYOP helps build up an individual’s ability to work in a team environment and endure mental strain while under high stress levels. This is important as an officer in the CAF would needs to be a strong team player and make good decisions fast, while being in high pressure situations.

For me, team work mans a group of people helping each other to achieve a common goal. In the last few days, my flight learned to work better as a team through learning each other’s strengths and weaknesses. We also learned how to communicate better both verbally and non-verbally, due to some language barriers. Knowing each other better and communicating effectively has increased the flights cohesion, making us a better team.

4 FYOP staff speak from the heart & the mind