The RMC Difference: Actions That Represent Us 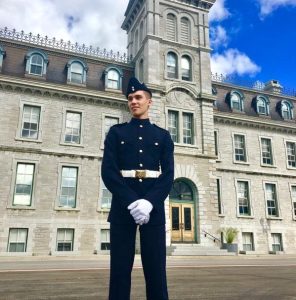 In one of the first basic training lessons, military members are taught that our most important task concerns the protection of our country and its people. This further expands into an important and central part of leadership in the military, promoting and seeking the welfare of your people. Although these lessons were initially taught via PowerPoint, my exposure and training on leadership at RMC thus far in my career has allowed me to handle a complex situation that occurred on New Year’s Eve.

Alongside a group of other students from various civilian universities and two other RMC Cadets, our group went to a bar to celebrate the New Year. It was quite cold in Ottawa, and there had been freezing rain all night. Having been my first time to Ottawa, I was really excited to see what it would be like. We were all just looking forward to celebrating the New Year with one another. But a few hours later, I noticed a strange situation develop. From where I was standing at the time, it seemed like someone was dropping a substance in a girls drink while she had her back turned. I really wasn’t sure what I saw, mostly because it was so far away and the bar was so busy, but it was stuck in the back of my mind for the remainder of the night.

After the countdown to the New Year, myself and the two other RMC Cadets went outside with our friends from civilian university. When we arrived at the street, our attention shifted to a girl, standing alone and struggling to keep her balance. Although I wasn’t able to see the girl that was at the bar earlier, I was fairly certain that this was the same girl from before. Almost instinctively, we walked over and asked her if she was alright and if someone was there to take care of her. After that initial interaction, it became evident that something was amiss. She could not remember her name or if she had arrived at the bar with anyone. My initial thoughts (which were later confirmed by the paramedics), were that someone had slipped Rohypnol or “roofies” into one of her drinks. We knew that she needed help, so we called the police. But as we turned around to focus our attention on the Cadet making the call, someone grabbed her. We raced over and demanded that he let her go, informing him that the police were on the way to take care of her. Despite multiple unheeded requests, I was able to keep her assailant at bay until the police arrived. At this point, I took a look around me. The only people still standing out there with me were the two other Cadets, one speaking with the police, and the other with the girl. Our friends from civilian university, and the other people that were initially interested in the situation had gone back into the bar, either to escape the cold and freezing rain, or simply to continue the party. The others obviously felt unaffected by the situation, yet myself and the other two Cadets had remained with this girl until the police took over.

Once the Police took over, I wondered, why was it that the three RMC Cadets took care of this complete stranger while no one else offered to help her? I think that our initial response to the situation was triggered by the military ethos that is instilled within us as military members, early on in our careers. Yet, our ability to handle this situation was certainly a result of the leadership exposure and training that RMC offers. Without communication, we had taken care of a complex and changing situation between the three of us. Not only had our actions been representative of the military ethos, but these actions were also an application of our limited but essential leadership training. This training allowed us to protect this individual who was clearly unable to defend herself. I was often told by a mentor of mine, that it is often not the easy thing, but the hard thing that is worth doing in life. It would have been much easier for us to walk away and return to the bar like the others had, but we had decided to protect this individual, despite how cold or wet we were, or how much we wanted to just party. Above all else, this girl’s safety was the primary concern of all of the Cadets that were present that night. This is just one example of the values and training that RMC has instilled within us, as we continue our journey and our training to become the next generation of Officers in the Canadian Armed Forces.