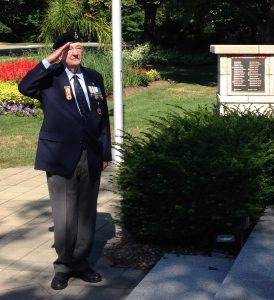 I arrived at the Cenotaph early to take photos of the flags flying in the wind on a beautiful sunny morning. My purpose was to commemorate the 75th Anniversary of VJ Day, the end of the War in the Pacific, the end of World War II, and also “Liberation Day”, the most special day of all for the survivors of the Battle of Hong Kong.

They had spent just over 44 months in horrific conditions in Japanese POW camps in Hong Kong and in Japan. This day continues to be commemorated every year by the very few survivors still alive and by the families of the 1,975 brave Canadian soldiers who fought in the Battle of Hong Kong December 8-25, 1941, including my late brother, Ken. The Royal Rifles from Quebec City and the Winnipeg Grenadiers were the first Canadian Army units to engage the enemy in combat in the Second World War. Ken was just 16 years old when he enlisted.

I sensed that I might be alone at this Cenotaph on this so very important day in Canada’s military history, and I was, until Amanda came walking by and saw me taking photos. She asked if she could help. This delightful young woman very willingly took the photos that I wanted and she also listened patiently while I told her the reasons for my being there that day.

Amanda admitted to not knowing enough about the various wars I spoke to her about. She seemed to be genuinely interested in my family’s service to our country. She had to leave but said that she hoped that I would still be at the Cenotaph later on so that she could bring her children to meet me.

She left. I stayed. She came back with her husband and their lovely daughters, aged 11 and 14. The youngest child asked me why there had to be wars. I did my best to explain why. She hopes to become a Veterinarian. I have no doubt that she will achieve her goal.

I feel very honoured to have met this fine young family whose Mom wanted them to meet me, an old soldier.

Perhaps Amanda and family are typical of so many such families these days, with the parents working from home, for now, but with uncertain futures as to employment, and with children heading back to school and potentially into harm’s way, all because of the Pandemic.

As we pass the torch in these troubled times, my meeting Amanda and her family encourages me to believe that it will be held high and in strong hands.

Good luck to them.