Editor’s Note:  We learned recently of Aus Cambon’s visit to his hometown and we persuaded him to share some of his reflections for publication.  Aus was still in school and home alone with his parents while all three of his siblings were overseas during WWII.  Margery was an RCAMC Nursing Sister. Noreen was in the RCAF.  Ken served with the Royal Rifles of Canada in “C” Force at the Battle of Hong Kong in 1941.  Aus entered RMC in 1950.  After graduation in 1954 he served in 3RCHA, including in Korea, worked in industry for a long while and also became an educator, teaching  for 20 years in universities and colleges in Canada and abroad.  WJO

BACK TO MY ROOTS: A nostalgic visit to my old hometown, Quebec City

Believing that I was in danger of getting older and that nostalgia is good for the soul, I recently decided that it was time to spend a day or two re-visiting the city and environs where I was born and grew up.

As I approached the Quebec bridges on the South side of the St. Lawrence, I thought back to the days when people used to come out to see the bridge workers constructing the bridge that would become the longest bridge in the world.  Two historic disasters befell this project.  The southern span fell into the river on August 29, 1907 and a new centre span fell into the river on September 11, 1916.  I remember being told that my parents witnessed the latter event, but I have yet to verify if this really might have been so or not.

I know for sure that I used to write about high school sports for The Quebec Chronicle Telegraph, the oldest newspaper in North America, established in 1764 and still in business today.  I may be the paper’s oldest living former scribe.  I was paid one cent per column-line.  A true measure of my worth!

I also remember fondly my days as a sports reporter on CJNT, the newly-established  English-language radio station in the city.  The JNT in the station’s call letters stood for the owner’s name: Jean Narcisse Thiverge.  I had two sports news programs daily, morning and evening.  I also worked alongside a professional broadcaster, Gordie Breen, on the Junior A hockey broadcasts of the Quebec Citadels during the days when Jean Beliveau starred for the Citadels and for the senior league Quebec Aces before moving up to Les Canadiens de Montreal .  All of this fun stuff needs more time and space to do it justice.

The Etchemin River at the South end of the bridge reminded me of our cycling adventures out to that area as boy scouts.  One time we managed to set fire to the forested area we camped in while frying sausages.

The driver of a gasoline truck saved the day for us when we sought help.  He quickly extinguished the fire.

Onward across the bridge to the very old Mount Hermon Cemetery on Chemin St. Louis, about three miles from the city centre.  This cemetery was established for the burial of Protestant citizens of the city starting in 1848.  A rather small white tombstone defines the Cambon Family plot (see photo above).  I stopped by intending to place a rose on the grave as a tribute to my sister Noreen whose ashes are buried at the site, but it being the Quebec summer holiday period the local florists were all closed.  Also buried here are my father and a sister I never knew.  Muriel fell to her death from a balcony at our home at a very early age.  The Edwards family used to take us out to this Cemetery for a drive on Sundays on a quite regular basis.

Next stop: The Plains of Abraham, sometimes known as The Battlefields Park, a national historic site where the epic battle between Wolfe and Montcalm took place on September 13, 1759. This park is located just minutes from where we lived, so as kids we spent a great deal of time playing there.  We often followed the exact paths that Wolfe’s soldiers used to scale the cliffs from the water at Anse-au-Foulon, where we would go swimming, up to the battlefield.  Not easy, but we were somewhat more nimble back then.

I drove around this area for quite some time remembering how as kids we were able to talk with the German Prisoners-Of-War who were quartered at le Citadel.  We spoke with them from across one of the moats.  My brother was also a P.O.W. in those days but in far less-welcoming surroundings in Hong Kong and  Japan.

Drove past the Museum and the monuments near the old City Jail and exited almost at the top of Cartier Avenue, just one of the many streets on which we had lived.  Our old tenement house on Cartier Avenue still stands.  See the photo of the apartments with long white stairs and a photo of the back yard where I played a lot with my childhood friend, Claude Renaud.  I spent so much time with him that my parents became concerned that I was speaking more French than English.  We lived at #44, second floor, but the house numbers have changed.  The Blackmores were our neighbours.  “Blackie”, Ken’s close friend, was a pilot in WWII. He was shot down over Germany, captured, and, as happened to my brother Ken, he became a P.O.W.

We moved many times back then. Everyone moved on the same day, May 1st.  We resided in flats on a number of other streets too: de Maisonneuve, rue Bon Pasteur, la Chevrotiere.  Some places we lived in are still standing but a large government building now stands where our la Chevrotiere flat was.

My old elementary school building, St. George’s (see photo of what was the school), is still there, but it is now a cultural and recreational centre for college students.  And the name of the street that the school was on and that the building is still on has been changed to “blvd Jean-Levesque”.

We lived in a neighbourhood that was made up of many Irish-Canadians and French-Canadians.  Many of my friends attended the nearby Roman Catholic school, “St. Pat’s”.  Most of my school friends lived in the West end of the city and in Sillery, a city suberb.  We were poor, not a middle-class family, but we got by.

On Cartier Avenue, the Chinese laundry where I used to take our bed sheets for laundering is gone and so is the Chinese restaurant where the proprietor had welcomed Ken home as a conquering hero. So is the corner grocery store to which I used to bring our ration tickets for sugar, butter, and meat.  The store owner used to save calves liver for us, a special treat for me!  I like it much more today than I did back them.

On la Chevrotiere street I very often played ball hockey or threw a baseball around with friends on the street while Dad played scales on his saxophone up in the second-floor window. Dad had been a bandsman in the Royal 22nd regimental band but was forced into retirement at the start of the War. He also played in the Quebec Symphony Orchestra. I used to change the pads in his wind instruments using a strong-smelling glue.  I was never able to make the slightest sound come out of his saxophone, clarinet, or oboe.  My musical talent has always been limited to playing the stereo.

Onward down rue Grande-Alle past the Quebec Armoury where Ken had joined the Army up at age 16.

The Armoury was partially destroyed by fire in 2008.  It has been beautifully restored and is now the home of les Voltigeurs de Québec. The Quebec Winter Club that had been nearby is gone.  The Price family home where I spent a lot of afternoons playing hockey on the family’s outdoor rink is gone and expensive new residence buildings now line the street.  Colonel Price, a graduate of RMC, a really fine gentleman, commanded one of the Companies (not Ken’s) in The Royal Rifles of Canada in the Battle of Hong Kong.

Next, it was on to the Chateau Frontenac where I sought to meet with the hotel manager.  He was away so I chatted for a while with his charming young assistant.  I told her I had been a Page Boy at the hotel in 1948.  She had no idea whatsoever what a Page Boy was, or what he did.  The job no longer exists.  But I still do!

Overall the city looked GREAT.  It was teeming with tourists, many of them Quebeckers.  I was proud of my old home town and how they welcomed tourists and respected them during their visits.  Of course tourism is a major revenue-generating industry for the city.  Smartly-dressed city and contractor employees make sure that traffic moves smoothly and efficiently in spite of blockages caused by construction or by such events as a Comedy Festival that was happening right on rue Grand-Allee.  Toronto could learn from how they do this.

I then drove my car onto the ferry that crosses over to Levis.  This ferry ride must be the lowest cost ride of its kind in the world.  It also offers all on board a splendid view of Quebec City and the famous Citadel. 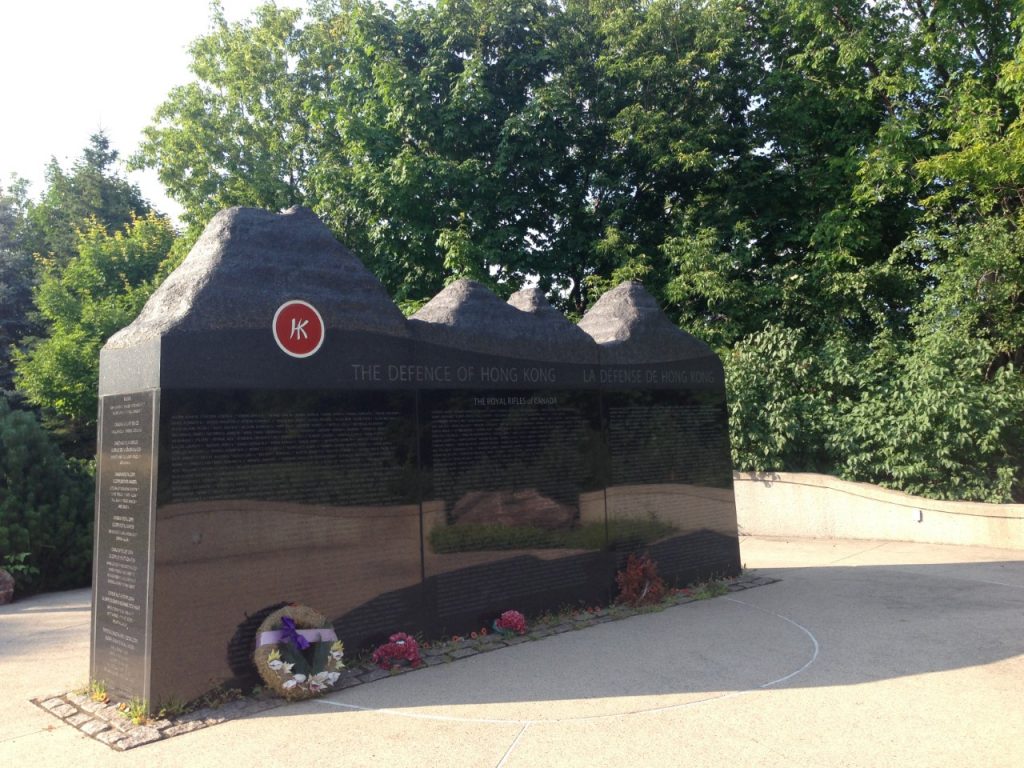 Traveling back through Ottawa I thought it fitting to pause and pay my respects to Ken and his comrades who fought at the Battle of Hong Kong.  See photo of the Memorial Wall monument that is dedicated to their memory.  The names of all those who fought in that epic battle are etched on the monument, including that of Gander, the heroic mascot of Royal Rifles of Canada, a Newfoundland dog who died in battle.   It is a truly beautiful tribute to the Royal Rifles, the Winnipeg Grenadiers, and to all the support forces who served at Hong Kong.