A special thanks to 3201 Austen (Aus) Cambon, Cadet Wing Sports Officer, RMC 1953-54 who spent countless hours in recording significant RMC sports happenings during the late 1940s through to the mid 1950s. 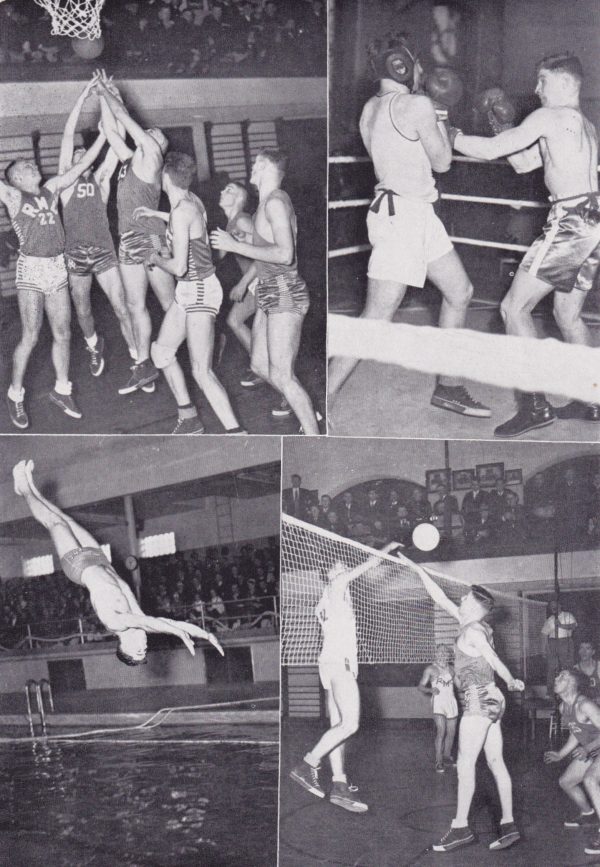 SPORTS AT RMC IN THE POST-WAR ERA #12

INTRAMURAL & OTHER SPORTS, AWARDS & TROPHIES, LIVES AFTER RMC, WRAPPING IT UP

INTRAMURAL (Inter-Squadron, Inter-Flight) sports activities have been a vital and core component of cadet life at RMC for a very long time.  The programs in which cadets competed for Squadron honours varied from time to time but essentially provided for broad participation and the opportunity for cadets to experience various sports by actually competing in those sports.  We cannot do justice to these programs by trying to cover them in any detail here but suffice to say there were always many sports and many games in these programs.  Some of the sports involved in Inter-Squadron Sports programs:  Floor Hockey, Softball, Basketball, Volleyball, Swimming, Water Polo, Tennis, Soccer, Rifle and Pistol Shooting, Track & Field, Annual Harriers Race, Hockey, Annual Regatta/Boating, Football, and Curling.

OTHER SPORTS ACTIVITIES which were also core to sports life at the College included Recruit Boxing and the Open Boxing Tournament, the Canadian Services Colleges Tournament (RMC, Royal Roads, CMR) and, though some may not see it properly categorized as a “sport”, the Recruit Obstacle Course has to be included as a physical and team challenge of significant dimension.  Captain “Spike” Malone even gave some of us Riding lessons inside the boards of what would eventually be an outdoor hockey rink.  Some of us who gave it a try actually ended up in the Royal Canadian Horse Artillery though our Regiments were without horses.  All of these sporting activities were especially memorable for all of us who experienced them during our years at the College.

AWARDS & TROPHIES have always been abundant at RMC.  The College maintains quite good records of the many trophies, some new, some quite historic and re-dedicated for current use, some out-of-use but maintained in trophy cases.  We have made reference to a number of awards and trophies in past Issues so we will focus here on only a few, particularly those of consequence to our Class of RR’52/RMC’54:

The Marshall Memorial Award for Sportsmanship trophy was donated to the College in 1956 by the Class of RR’52/RMC’54 in memory of our classmate 3300 James Alick Marshall, RCAF, CWC at both RR and RMC, tragically killed in a training accident at Portage La Prairie in 1954 only six weeks after Graduation.  This Award was initially presented to “the outstanding cadet who best demonstrated sportsmanship, determination, and skill in the annual Canadian Services Colleges Tournament”.  These Tournaments were discontinued.  This trophy was re-dedicated and is now being awarded to “the Third Year cadet who best exemplifies sportsmanship in the RMC IM (Intramural) Sports Competition”.

The Greenwood Cup was donated to the College by 1971 H.RdeB. Greenwood in 1930 when he got to keep the previous trophy that was in competition for the ‘One Mile Challenge Race’, a race that dated back to at least 1895 at RMC.  In our era, the One Mile Race was the feature event at all track meets worldwide with runners reaching out to run a mile in under 4 minutes, a feat finally achieved by the great Roger Bannister in 1954.  Our Classmate 3252 E.A. “Ted” Tromanhauser won the One Mile race at RMC in his first three years at the College and, accordingly, in keeping with tradition, he got to keep the Greenwood Cup, replacing it with the The E.A.Tromanhauser Cup.  In his final year, Ted became the first winner of his own trophy, thus winning this premier event in four successive years, a unique accomplishment.  Ted passed away in 2005 suffering a massive heart attack after his usual recreational run.  In accordance with his wishes The Greenwood Cup was returned to the College in October 2006 and rededicated “to be awarded to the first female cadet across the finishing line in the annual Harriers Race”.  The first winner of this rededicated trophy was 24204 Beth Crozier who, like Ted, was a pilot.

The Prince of Wales Trophy is a very old and much-coveted trophy that has been won through time by both pre-war and post-war cadets.  This prestigious award recognizes one graduating cadet “for outstanding ability in athletics over a four-year period”.  Ted Tromanhauser was the proud and deserving winner of the Prince of Wales Trophy in our graduating year for his outstanding performances in winning the One Mile Race in four successive years and leading both the Harriers Team and the Track and Field Team to C.I.A.U. Championships, bringing honour to the College and to the teams.

Crests were awarded each year “to cadets who, in the opinion of the Colours Committee, have shown outstanding ability in one or more sporting activities”.  In our Graduating Year Crest winners included:  Jerry Donahue – Hockey,  Ian MacDonnell- Skiing,  Ted Tromanhauser – Track & Field,

Rugby was sometimes used as alternative name for Canadian Football during this era. 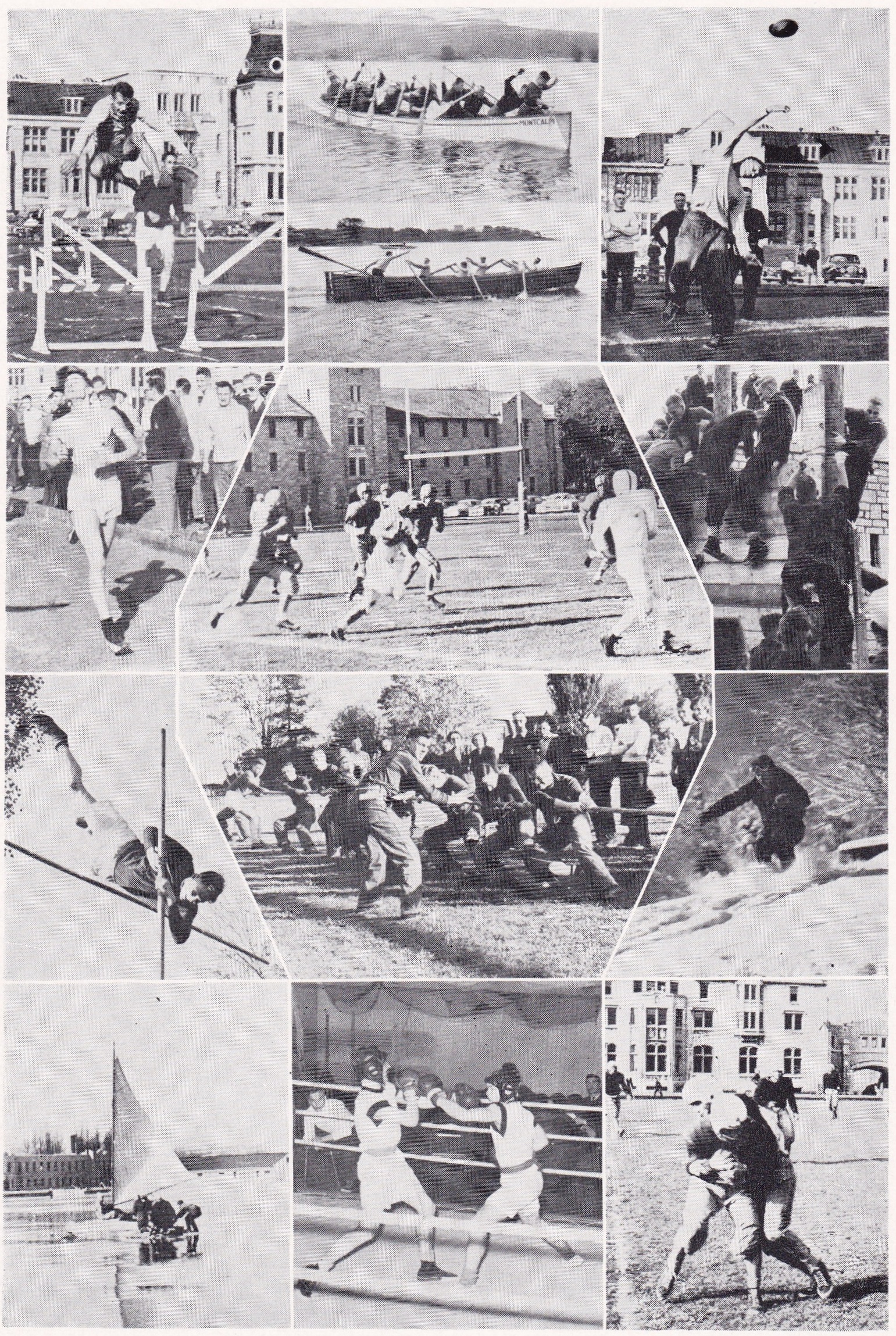 LIVES LIVED AFTER SPORTS AT RMC

In earlier Issues, we looked back at some cadets who had been prominent in sports while at RMC wondering what happened to them in their post-RMC lives.  Using only a miniscule sample we noted that Dan Loomis and Herb Pitts had been decorated for Valour in the Korean War and subsequently both enjoyed especially successful military careers.  Palle Kiar, magnificent in athletics, also performed admirably in the business word as a Vice President with Bell Canada.  Jack Pike and Ron Mann chose academia as their futures, both becoming high-achieving educators and more.  Dave Wightman stayed in the military and ultimately commanded our Canadian Forces in Europe.  While the paths to success can differ it seems very probable that participation in sports contributes to the development of leadership qualities and helps pave the way to success, whether in the military or in other endeavours.

I found it interesting to consider adding a few more examples to my sampling, using other classmates whom I met very long ago.  I had no idea where their lives would lead and it has been fascinating to delve into their stories.  You, too, will hopefully find their stories captivating.

Jerry Donahue joined our class in the Fall of 1950 after having been at the College for a year with the Class of RMC’53.  A victim of the “no penalties” rule in the historic RMC / West Point hockey series cost him dearly.  Nevertheless he ultimately enjoyed a unique and successful military career that included meeting and shaking hands with Ho Chi Minh, the Vietnamese Communist revolutionary leader.

Jon Jennekens became exceptionally successful as a leader in the safety sector of the international nuclear industry.  Jon’s efforts and service to Canada in this role earned him an appointment as an Officer of the Order of Canada (OC).  This certainly qualifies as high-achievement.

Ed Czaja was a natural athlete, a fine leader, and our Class President (Class of RR’52/RMC’54).   He had a 36-year career in Canada’s oil industry achieving very senior management positions.  Ed was an engineer whose success included becoming one of our Canadian “captains of industry”.

John Neroutsos developed a fascinating career in which he combined his interest in everything associated with aviation and his passion for flying.  His long-time involvement in the Air Force Reserves included leadership in that sector of our military forces. 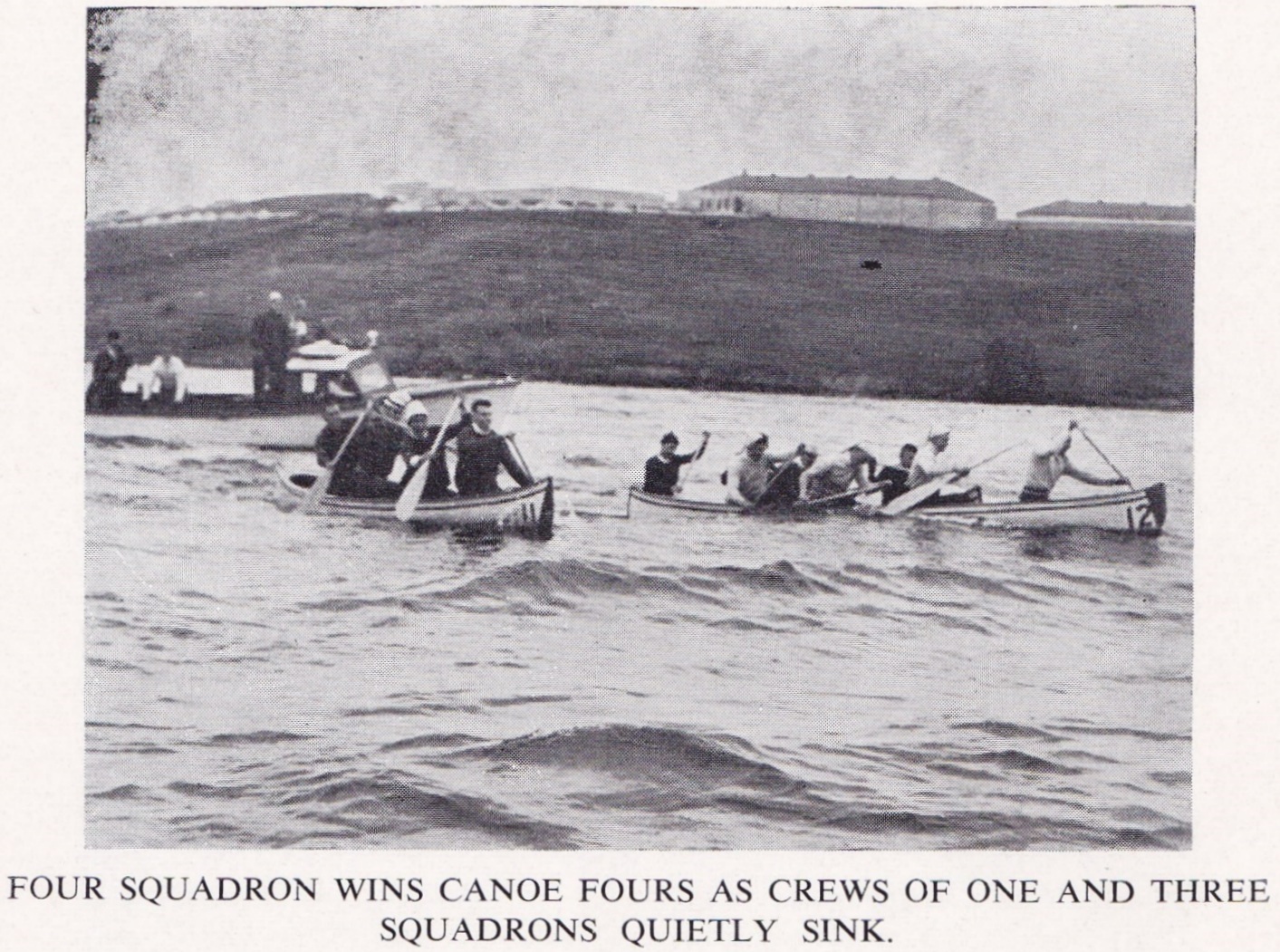 As we sign off, I look back at the ground we covered going ‘Down Memory Lane”.  We were so very fortunate to experience life as cadets at RMC.  The College made us who we became.  RSM Coggins, S/Sgt. Fred McConnell, the Sergeants and the C.P.O.’s, made men out of those of us who were boys.  The Faculty and Staff of the College taught us in the classrooms and coached us on the sports fields, in the gyms and at the arenas, giving freely of their private time to do so.  We would not fully understand the sacrifices they made on our behalf until we became family men ourselves.  Saying “thank you” always seemed so insufficient.  However, RMC surely motivated us to contribute to society in kind in our own lives after RMC.  My first summer training experience was at the Royal Canadian School of Signals before I became a Gunner.  I recall training on the WS 19 radio transceivers that were used in WWII and using the military radio language of the day.  Perhaps I should now transmit just two words: “THANKS … OUT”.