“In a flash of an eye I responded ‘You interrupted mine too, Sir.’” 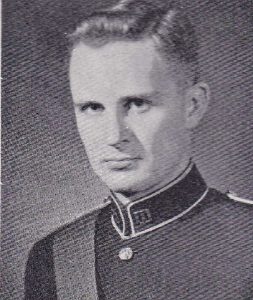 It was the uniform that attracted 3557 John Rutherford (RMC 1956) to military college. “They really attract the girls!” he joked. “I went to Glebe Collegiate in Ottawa, and at the Glebe Christmas Dinner some guys a year or two ahead of me showed up in their fancy Cadet uniforms complete with sashes, etc. Also none of my friends from my street – Sunnyside – went to RMC and after talking to them I decided to apply.”

Coming to RMC wasn’t quite that simple, however. “Before Dad would let me make the application, he arranged for me to talk with his boss, the Minister of Labour, Milton Gregg, VC, from WW1, who asserted that the military would be an honourable career if I so chose.” John went on, “After summer training in Chilliwack I came back to Ottawa wanting to join ROTP which had been started only in the fall of 1952. Then Dad insisted that I interview Brigadier DRB Jones, Chief Engineer, who had to assure my father that the experience would be good for me as a Sapper Officer for three years after graduating.” John entered RMC 12 Sept 1952 “along with 118 other scared kids.”

The Ottawa, Ontario, native has more than a few fond memories of the years that followed. “Recruit obstacle race I was designated ‘runner’ by our squadron leader,” he explained. “In those days the race was one of individual effort, greatly less difficult than the modern race that is a team effort. I came second in the Recruit Obstacle to a fellow squadron member Skip McCarthy, a superb athlete.”

“In my Fourth Year I was a member of the Cadet Wing Headquarters staff. The CWC led HQ on to the Square for the start of the College mass Cross Country race and stopped us three feet in front of the massed College but was ordered to take a 25 yard lead and I followed with the group. I think now that the CWC intended that I remain with the mass. Anyhow, with a 25 yard start I won the race.”

“And in Recruit Year 1952 boxing was compulsory for all recruits. I weighed in at 145 lbs and was a welterweight. (At the same time I was on the Senior Hockey team so I just did not drink much water after hockey practice before the weigh in.) I won all of my fights and was hit hard only once breaking a molar. The guy that hit me, 3589 Bev Dimock, was invited to be on the College boxing team. I was not so invited. My name is on a board in the New Gym, Gentleman Cadet John R Rutherford, Novice Champion, or something to that effect.”

“Col Sawyer, Director of Studies, selected some of the highest scoring fall term recruits and conned most of us into taking Chemical Engineering.  It turned out good for me,” he said.

Ex-Cadets, as well as current Cadets, will recognize themselves in what John called his “greatest challenge” while at the College. “Staying awake in class and getting enough to eat and time to study!”

For John the adventure wasn’t over following grad. “My first post grad Training Course was the ‘Young Officers’ Training Course.’ Major Angus MacPherson was giving us a lecture on the ‘Principles of War.’ This was perhaps the fifth or sixth such lecture we had had and even though Angus was a great lecturer, I closed my eyes to better concentrate on what he was saying. The room went suddenly quiet. I opened my eyes to see what was going on. Everybody in the class was looking at me. Major MacPherson, red-faced, was glaring at me. It turned out that he had thrown his chalk at me, missed, and it landed quietly in the curtains behind me.  He then threw the board duster that also landed in the curtain behind me.  Major MacPherson told me I should pay attention to the jewels of wisdom he was expounding.  He then turned to the board to start again.  He turned to me and said ‘Rutherford, you interrupted my chain of thought.’  In a flash of an eye I responded ‘You interrupted mine too, Sir.’ Talk about silence…  Until the Major from the Queens’ Own Rifles, a co-instructor, let out a howl of laughter.  The class broke up.  Major MacPherson glowered more redly and said ‘Rutherford, see me after class.’ For penance I was confined to camp for the long week end, served as the Aide de Camp to a visiting English General and had to write up an article on this General’s visit to be published in the forthcoming issue of the Corp newspaper ‘The Sapper.’”

John Rutherford released from the Royal Canadian Engineers in 1960 to return to grad school. He earned his MA (Math) at Queens in 1963 and his PhD at Virginia Tech in 1966. He was back at RMC from 1960-1961 to teach Mathematics, Statistics, and Operations Research, and then again after earning his PhD from 1965-1968 as an Associate Prof.

“Dr. Andy Elliot, head of the Math Dept., hired me to be an instructor in mathematics immediately after I left the Army,” John recalled. “Later, I asked him why he’d hired me. He told me that on my third year differential equations exam I had invented a new way to solve one of the questions of the final exam paper. I had no idea I had done this!”

John joined DuPont Research Laboratories in Kingston in 1968 and moved on to the Federal Public Service in 1974. While there he spent most of his time with the Office of the Auditor General. He retired in 1989.

Over the years he has served on a number of Boards, including that of the RMC Club in the late 1960s and early 1970s when he lived in Kingston. “There was also Unitarian House, a non-profit housing for seniors for about 25 years; Salvation Army Grace Manor in Ottawa for 4 years; and the Institute of Mental Health Research at the Royal for five years.”

“I have loved every job I have had,” he said. “Sapper Officer, Grad student, Associate Prof at RMC, Dupont Research Centre  in Kingston, Office of the Auditor General, retirement and boards of directors, family life and dinners,  wife and ravel, sports and friendships with classmates from college.” 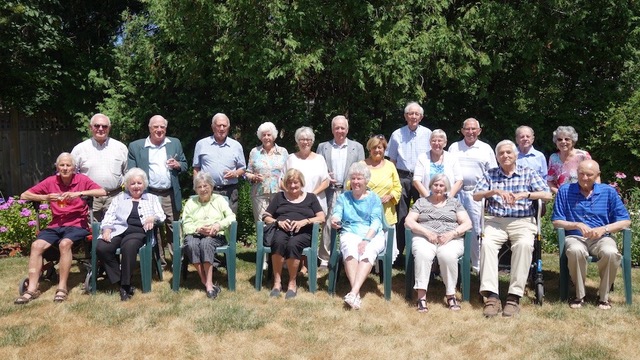 For now John stays in touch with classmates and generally just enjoys retirement. “We have had first-class secretaries who maintained forms of contact over the years.  In Ottawa I play golf with one bunch of ex-cadets and bridge with another and have done so for many years. The widows are also connected. My wife and I invite our bridge playing classmates twice a year for a luncheon at our house with their spouses.  The Christmas event usually attracts about 35 to play bridge or to just visit, including widows.  The August lunch attracts almost as many. One of our Kingston classmates, 3649 David Spooner and his wife Rosalie, host a class get-together most Ex-Cadet weekends.”

“One aspect of RMC I fully appreciate are the life time friends that have been maintained for me through the RMC Club and our class secretary.”

“I’ve played sports all my life: hockey, track and football at RMC, tennis, badminton, industrial league hockey in Army and in Ottawa.  Now I play only golf and downhill skiing (now age 85), as well as a poor game of bridge. I have also been a member of the First Unitarian Congregation of Ottawa for about 40 years.”

“I married my second wife in 1987. The combined family is 7 children of which 5 are married, jointly 8 grandchildren and 2 great grandchildren.  Most of this crowd live in Ottawa so family dinners are common.  For my just passed her 85th birthday where we had 24 for a birthday party dinner.  I cooked the filet mignon roast and the broccoli.  My wife prepared the rest.  Cooking is one of my few hobbies now. I also read a lot, mostly now science, history and evolution. Finally, my wife and I have travelled many times to such places as South Africa, England, Ireland and Scotland, France, Germany, Turkey Thailand, Myanmar, Australia, New Zealand, Belgium, Spain etc .  For most of these trips I wrote up a detailed history for the countries visited as well as a tourist style pictorial essay.”