Above: The Salute to Veterans banner for LCol (ret’d) Murray Stewart, CD, PPCLI

Driving through the neighboring town of Wheatley early last summer my wife Daisy and I saw a number of large banners titled Hometown Heroes mounted on poles. The banners included the names, photos and details of service of local veterans.

We thought it a splendid idea and decided to examine the feasibility of introducing a similar project to our town of Kingsville.

Daisy contacted some towns in Ontario and the Maritimes who have banner projects in place and gained useful information. A committee was struck which included Daisy as Chair, myself, and fellow Legion members of Branch #188 Mary-Maureen Atkin, the Branch Service Officer and her husband Jay, a graphic artist.

An appropriate banner title was discussed. Hometown Heroes was eschewed, since there were undoubtedly some decorated heroes, but the majority volunteered and simply did their duty. Instead, the title Salute to Veterans was selected.

The committee concluded that the project was feasible and appeared before Town Council on Sept 10th to seek approval where it received unanimous support.

We met with the Wheatley committee and selected Magnum Signs of Chatham, Ontario as the banner provider since they had a proven record and were passionate about veterans’ projects.

The 2018 Launch was held on Oct 27th at the Legion where 15 banners were on display which was followed by a Dedication Ceremony. My banner was the first to be mounted on a pole near the Legion, sponsored and unveiled by Daisy.  The cost to sponsors is $225. Some banner samples are attached.

From the  outset this project has received a tremendous amount of interest, excitement and support from Council, veterans, their families and the general public. Town Council support has been outstanding – providing $7,500 to purchase high quality, spring loaded banner brackets, staff support, banner cleaning and storage and was the first to purchase a generic banner honouring Kingsville veterans.

The banners are striking – 2’ x 4’ of 12 oz. vinyl which will last forever, double sided, with the Salute to Veterans title, flags, and fields of poppies, the Town Logo, and the veteran’s photo, name, branch of service, era served, cap badge and the name of the sponsor – all in vivid colour. Sponsors can include veterans and their families, friends and businesses with a connection to the Town of Kingsville. There are 2 types of banners – individual and generic (honouring a group of veterans). Keen interest in the project continued into 2019. An astonishing 83 applications were processed and with the 15 from last year 98 banners were scheduled to be raised this year.

They include 2 multiple sponsorships; 4 from the Cottam Rotary Club and 11 from the Kendrick Funeral Home.

Also included are 2 unique banners for War Horses and Military Service Dogs. The Canadian Veterinary Corps, through veterinarian Dr. Richard Bartnett, sponsored a banner for the millions of horses killed in action over the last 125 years, particularly in World War 1.

Dr. Abby Jakob of Eyes sponsored a banner for Service Dogs killed in war. Her banner features Gander, a Newfoundland Dog, and the mascot of the Royal Rifles of Canada. Gander gave his life while saving the lives of wounded Canadian soldiers during the Battle of Hong Kong in December, 1941. In 2000, he was posthumously awarded the Dickin Medal, the animal equivalent of the Victoria Cross.

Daisy contacted Sue Beard of Toronto who co-authored a book with CSM George MacDonnell of the Royal Rifles.  The book is titled A Dog Named Gander and Sue sent us a copy. CSM MacDonnell survived The Battle of Hong Kong and spent 4 years as a POW in Japan.  At age 97, he is the sole surviving Canadian POW from that battle. We plan to visit them next year. 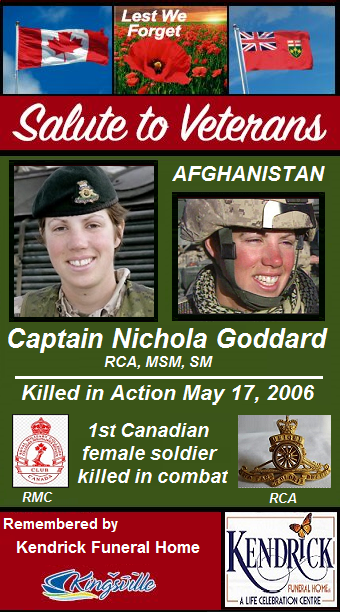 The Salute to Veterans banner for 22458 Nichola Goddard.

I sponsored 3 banners this year –the late Capt Ken Crichton. PPCLI, the late RMC Ex-Cadet Capt Nicola Goddard, RCHA, the first female to be killed in Afghanistan and for the Canadians who served with the U.S Forces during the Vietnam War.

There are 3 Patricia banners – Capt Crichton, Sgt Stewart Dunmore and mine. Ken and I served as subalterns with the Second Battalion in Edmonton in the late 1950’s and then as Captains at the RCS of I. He was a fine officer and good friend and in superb physical condition. He stood near the top of class on the U.S Army Ranger Course. In 1959, he, Sgt Wilson and his platoon distinguished themselves by winning the Brigade Forced March Competition in record time – lustily singing Has Anyone Seen The Colonel as they ran past the Reviewing Stand.

Ken resigned his commission in the 1960’s, joined the U.S. Special Forces and reached the rank of Master Sergeant. Wounded in Vietnam he was medically discharged and returned to Canada. Subsequently diagnosed with PYSD, tragically he took his own life – it is to weep.

The 2019 Launch was held at the Legion on Aug 24th. Ninety-eight banners were on display offering the opportunity for sponsors to closely view their banners before they were raised. At 11:00 AM a dedication Ceremony was held conducted by the Branch Padre, Rev. John Van Omme, which included the unveiling of the banner of LCol F.K. Jasperson, the Commanding Officer of the Essex Scottish at the Dieppe Raid in 1942. Legion Branch #188 is named in his memory. This was followed by a Salute to Living Veterans and a Lament for the Fallen. The Sun Parlor Pipes and Drums were in attendance. A copy of the Order of Service is attached.

This project has received extensive coverage by 2 local newspapers: The Kingsville Reporter and Southpoint Sun. Copies of articles from Sep 2018 to Oct 2019 are attached.

It has been a privilege to be involved with this project to honour our veterans. living and deceased, who have sacrificed so much in peace and war, often at great cost.

I credit my wife Daisy, as Committee Chair, for her drive and enthusiasm in ensuring the success of this project and in her superb management of the intricacies of a multi-faceted project.

Appreciation must also be expressed to JAY Atkin foe his outstanding graphic design skills and countless hours in coordinating with Magnum Signs and the town.

We look forward to continuing with this project in future years.

The Class of 1974: Questions Asked & Answered as They Entered the Old Brigade

Remember When: Avis and Cope Running Endless Circles (circa fall 1975)