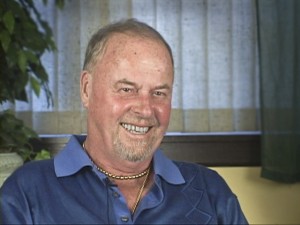 After graduating from RMC in 1960 Mr. Hamilton obtained his Engineering degree from Queen’s University. Following graduation he had a tour with No. One Mine Troop maintaining communications for the Diefenbunker at Carp in the Ottawa Valley. For a couple of years he was the Chief Telephone Engineer of the Canadian Army, then was with the Canadian Signals Regiment and ran the communications for the Pan Am Games in 1967 at Ft. Osborne Barracks. After leaving the military he taught for two years at St. Lawrence College in Kingston and then moved to BC where he worked for BC Tel, retiring after 31 years’ service.

The following are excerpts from an oral history interview held during Homecoming in September 2008 where he describes his RRMC cadet experience to Royal Roads University oral history coordinator, Karen Inkster (Karen.Inkster@royalroads.ca).

Karen: So what does it feel like to be back at Royal Roads after so long?

Karen: And what do you remember about the circle?

Larry: Well the circle, as you’re probably aware, was a form of minor punishment that was dealt out by the seniors to the juniors for having “froust” or dust on your clothes or having an improper haircut or a sprung “spiffy” – a “spiffy” was a wire device used to keep the collar of your shirt straight and there were little prongs that were stuck into the collar and they would jump out and that was known as “sprung spiffy” and that was worth a circle or three. And in regards to the circle…after I’d been here about six weeks, one Sunday morning on parade, Captain Charles noticed that I hadn’t got a haircut that week and he just said: “Haircut” and the person behind him said: “Four days defaulters” and so that was extra parades and punishment. And in the process of those four days defaulters I acquired a fifth day and in the process of those five days I acquired 52 circles. I was one of the lads from the prairies, from Saskatchewan, and we were all in danger of failing out because the education that the other people brought with them from New Brunswick or Nova Scotia or British Columbia was far superior to what we’d known on the prairies and so struggling to try and keep my marks in line and get my assignments done I had these 52 circles.

So one Sunday afternoon I thought I’d just bite the bullet and go out and run those 52 circles. So the good news was that on the weekend you could use gym gear rather than your boots and uniform to run. The bad news was that you had to give an eyes right to the visitors – every time you passed a visitor you had to drop your hands to your side at attention and turn your head to the right or left to look at the visitor. And some of the visitors stayed there forever on the circles, parked in cars or whatever. And around and around I went and after a while I guess some of the visitors got quite concerned about this, this lad that seemed to be out there forever, just going round 13 circles completed, 27 circles completed. So they went into the castle here and summoned up the duty officer and said, “What is going on with this lad – why are you treating him like this?” He said “Well that’s the way things are done around here” and they said “Well we think you should probably look into this because he’s not looking so good.”

Karen: So how far was that? 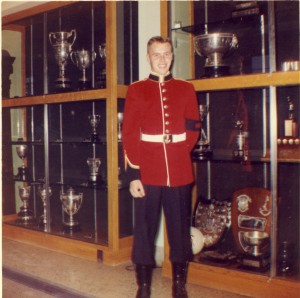 Karen: You must have been in great shape.

Larry: I was pretty light at the time. I weighed about 115-120 pounds – as opposed to my portly self now. Because everywhere you went you had to run – you couldn’t walk outside on the circle or on the way to the gym here or to the engineering drafting here. You had to run all the time and you kept your weight down pretty good.

Karen: So what brought you from Saskatchewan to Royal Roads?

Larry: My family was not very well off, although my dad had an excellent job. He had been in the war and for whatever reason had not accumulated many funds so we lived on the outskirts of Regina. We did not even have running water. I had to carry water from a well located about a block and a half away and we had an outhouse and had a strange toilet during the winter and so it was apparent if I was going to go to university that I had to locate some funds some other way. I had been associated with the military – I had been in cadets for several years and I had gone to cadet camp in Dundurn, Saskatchewan, just 30 miles south of Saskatoon and so I had a fairly good grounding in the military. So I applied to military college and I got in just by the skin of my teeth because I wasn’t selected in the initial draft but as they contacted people and they said “Oh I’ve changed my mind, I’m going to do this or I’m going to do that”, some other openings became available and I got one of those. In our year I believe 4,000 people applied and 400 got in. So it was quite a stretch to get to military college in those days.

Karen: So when you got here did you soon know that you had a lot to catch up with some of the other people? Larry: Immediately I recognized that I was academically challenged. I was getting 2% on my mathematics exams and stuff like this. We had a fellow that came from the same collegiate that I came from in Regina – Scott Collegiate Institute. His name was Roger Reid-Bicknell (4952) and he had graduated at the top of the class with an average of 94% out of Scott Collegiate – at Christmas in the first year he had a 58% average. And if you had an average – I had less – and if you had an average of less than 45% you were sent home – you had failed out. So I forget the number that actually failed out at Christmas in 1956 but they were all from Saskatchewan and Manitoba – every single one of them. So our numbers dwindled rapidly and continued to do so. At the end of the first year I was the only person from the prairies that graduated without writing supplemental exams which was a bit of an achievement. And it just went on in the second year so I ended up winning the Governor General’s medal – silver medal for the highest academic average at Roads in that year. I didn’t think I stood a chance. I was amazed because my average hadn’t been that great. It was getting better and better – I never even thought about it and I was shocked and amazed when my name came up.

Karen: And how did you manage that?

Larry: Hard work. I was just terribly concerned and just trying to get my academics in order so I had a very limited social life. I had a brushing partner – we all had brushing partners – mine was Gerry Kautz (4298) and we stayed together for a couple of years and before each parade you would brush each other off and make sure they didn’t have any lint on them or froust as it was called here. But no I didn’t have much to do with the guys.

Karen: So what’s it like to have a reunion with everyone back together?

Larry: It’s nice to come to a reunion like this because your memory is faulty, as the years go by. Some things you remember very accurately and others kind of blur and blend and, and in talking to other people all of a sudden things start to clarify and gel, yes I remember, that’s correct, that is the way it was and last night for example, a few of us got together and were singing some of the old songs – “On the steps of Colwood”, and “We’re Royal Roads” and the “Outhouse Mouse” and I still remember all the words to those songs – probably as well as anyone.

Karen: I’ve never heard of these songs before.

Larry: No? (laughs) Well “The Outhouse Mouse” is ….I can say the words to you… “the liquor was spilt on the barroom floor, the bar was closed for the night, when out of the house came the outhouse mouse and he sat in the light; he lapped up the liquor on the barroom floor and on his haunches he sat; and all through the night you could hear him roar; bring on the goddamn cat!” That’s “The Outhouse Mouse”!

Karen: And what’s the provenance of the song?

Larry: Just songs, just football songs, the guys would get together and after you’d had a few drinks you’d start to vocalize (laughs)

Karen: And were there some specific to Royal Roads?

Larry: Oh yes, there’s one of them is “We’re Royal Roads, yes Royal Roads, you can tell us by our haircuts; through shock and shell we run like hell, count on our lack of guts; on wing parade or duty flight we’re symbolic of this place; and as we die you’ll hear us cry: we hate this place!”

Karen: I hadn’t heard that one before either!

Larry: Oh there’s a few of them.

Karen: So it sounds like your time at Royal Roads was pretty significant for you.

Larry: It was. In many ways it was…. I’ve been known to, to cry – I was so frustrated, upset and, and baffled by what was going on – it was just – it was so tough physically – and emotionally stressed because you’re saying I really don’t want to fail out and I’m going to…so those are very, very strong memories that I have of Royal Roads and in truth we did not like Royal Roads when we were here at that time (chuckling).

Larry: Well you’re not subject to all of these seniors, yelling and screaming at you and chasing you and making you do stupid things and just ruining your life – day after day after day – to the point where you truly would like to eliminate them permanently (chuckling).

Karen: Well it’s interesting because that was only half your time but that seems to stick in people’s minds the most, that first year.

Larry: The first year. It’s a shock, it’s as you probably know the military and many other organizations in order to train people to mold them into the kind of person they want, they destroy them first and then they start to rebuild you – slowly – and you don’t really know that’s happening. You hear these things sometime later perhaps and start thinking back and saying, yeah, yeah that’s what did happen actually (chuckling) – not being really aware of it at the time.

Karen: So what’s the significance for you, coming back to Royal Roads?

Larry: I hadn’t seen these guys for like 50 years – a lot of them – most of them. Just to revisit all of the memories and the people and just to renew old friendships and …to see how they’ve changed and grown.