Above: Members of the Class of ’61 with their spouses at their 55th reunion.

Near the end of September or in early October the Ex-cadet Reunions are held. These are three day events which run from Friday evening to after lunch on Sunday. Recruit year obstacle races, cadet wing parades, sporting events, awards ceremonies, class events, Saturday night formal dinners and Sunday morning parades to the Memorial Arch are all part of the weekends.

Traditionally classes return to RMC every five years. My next reunion is in 2021 when the Class of 1961 celebrates 60 years from graduation. Aging has reduced our numbers but hopefully there will still be a quorum for our Friday evening get together and voting on various admin and gifting matters.

All class members are welcome at these reunions even if they didn’t graduate from RMC, for whatever reason. Mind you I’m not sure this would hold true for axe murderers, traitors or Liberal Cabinet Ministers. Once you have a college number you’re part of that class until the bitter end.

Our 5th year reunion coincided with my (and new bride Joan) honeymoon. What a memorable honeymoon it was. And despite the “memorable” aspect, Joan has remained my only wife for 53 years. God willing, we’ll celebrate 54 years this September.

After a few days at a resort in the Muskoka area we traveled to Kingston for the second part of our honeymoon. Boy was Joan ever excited. Imagine the honour of being allowed to interrupt one’s honeymoon with an important event.

Because we parted ways after graduation and are scattered over the globe, most reunions involve a lot of somewhat juvenile behaviour including moderate alcohol consumption. The ladies are a side show but they get to put on their best duds for the Saturday night dinner dance. On Friday night of the 5th reunion someone slipped a “mickey” into my drinks. Joan, who had no driver’s license, had to drive our stick shift Volkswagen beetle back to the motel and pile me into bed. My mates, led by 5105 Jack Granatstein and 5097 Grant Mosher, wanted to take me back to RMC on my mattress and leave me on the parade square. I wouldn’t have objected because I was dead to the world. Joan wouldn’t let them do it. How protective she was of her new hubby. These days she might say, “He’s all yours. Close the door after you.”

Joan and I have been back to every 5 year reunion since, but none have been as memorable as the 5th.  She has come to know a few of the other spouses so it’s more interesting for her. And she likes the parades and other events, especially watching the ex-Cadets march to the Memorial Arch on Sundays.

In 2007 my class joined the Old Brigade which is the cadre of ex-cadets who are still alive after 50 years of entry in the military colleges. We get to wear fancy berets and march at or near the head of the Sunday parade. It’s quite a route march for some of the really old guys but many still do it. Some are pushed in wheel chairs. The route is lined by cadets at present arms position and I think this motivates a lot of people to carry on. As each reunion arrives the number of SOS (Struck Off Strength) classmate’s increases. This motivates me to return until Joan can no longer carry me onto the parade square.

On special reunions like the reunions 25 and 40 and entry into the Old Brigade, classes usually raise significant amounts of money to donate to the RMC for special purposes or to the RMC Foundation. I’m sorry to report that our class is pretty mean in this regard. For our Old Brigade year we barely raised $30,000. The class behind us raised almost $300,000. We’re not a generous class – donation wise.. There is no reason why our class couldn’t raise a significant amount of money on these special occasions. Happily our track record has improved. We have established a class fund to support Heritage Preservation at the Colleges. Recently a full repainting of Currie Hall by a preservation artist has been completed. A stunning result. 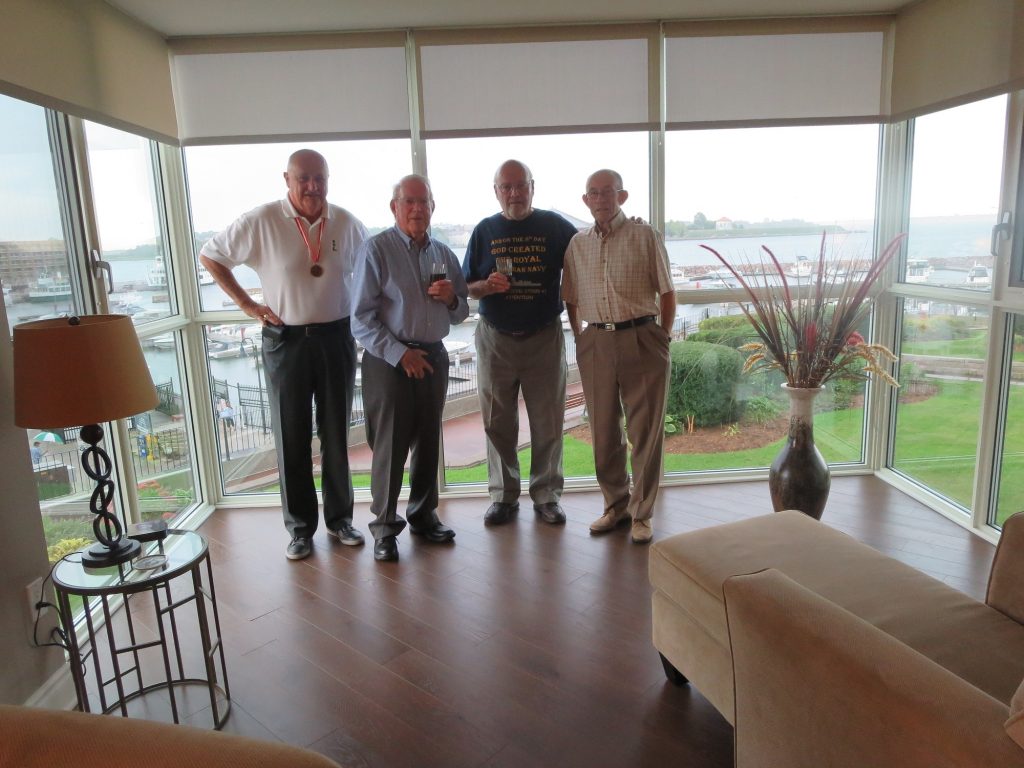 The Mini Reunion in Kingston, September 2016.

Then there are the mini-reunions. A small group of CMR entrants reunite every few years to share war stories and tell little white lies. I believe 5135 Pete Dumbrille organized the first event. The others were me, 5023 Dean Smith, 5061 Dent Harrison, 5046 Mike (Moose) Black, and 5072 George Knill.

George only attended one mini because his wife Peggy was ill with MLS and George had football coaching duties in Hamilton. Then he was hospitalized with Alzheimer’s disease. He died from that awful disease in 2018.

Our duty bound spouses joined us of course. They mostly ignored our prattling on about past deeds and misdeeds and formed their own mini within the mini.

Because Mike and Pete lived in Nova Scotia and could cook lobsters most of the minis took place in Nova Scotia. Joan and I didn’t mind as we spent most summer vacations in NS and love the place. Dent surely wanted to get away from Ottawa and Dean was from New Brunswick and had many relatives there. So he could kill two birds with the same travel stone.

There was one mini in Kingston. Dean and Carol Smith hosted us in their beautiful condo on the waterfront. Sadly Mike Black was too ill to travel from Halifax. 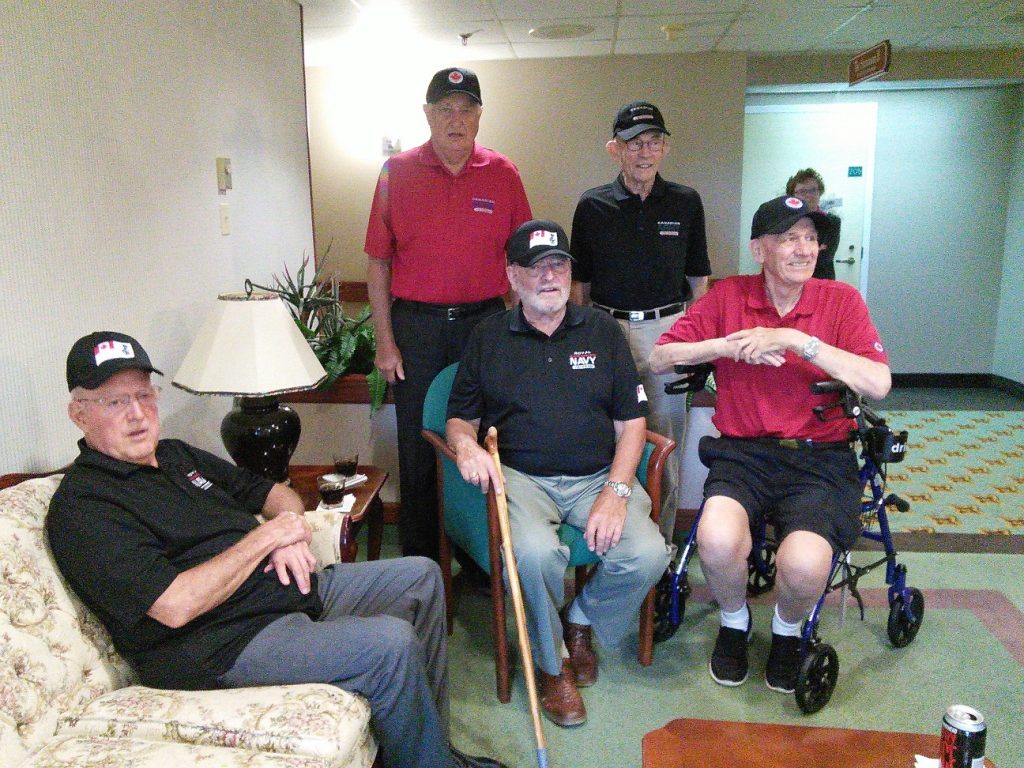 In 2017 we traveled to Halifax to reunite with Mike and Joan Black. Mike was too ill to travel so the rest of us booked into a lovely hotel on the Halifax waterfront. One evening we were hosted by Joan and Mike at their Halifax apartment. They catered the food and we, I hope, supplied the liquid refreshments (aka booze). No doubt rum was the main course. As a treat I bought all the lads RCN, RCAF and Canadian Army veteran shirts and ball caps to wear during the dinner. (See photo above.)

Our last mini was set up to coincide with the memorial service for Mike in Halifax in 2018. His wife Joan hosted this event and asked me to say a few words about Mike. I did so tearfully. Due to Carol Smith’s illness, Mike’s lifelong friend Dean Smith could not make the event so Dean asked Pete to read his eulogy. Pete did so, tearfully. For those who didn’t have the honour of knowing Mike Black here is part of his obituary. Unfortunately it doesn’t and couldn’t describe his wicked sense of humour and mastery of the pun art form. 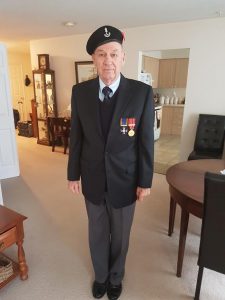 John Michael Black died at the age of 79 years of lung cancer in Veterans’ Memorial Building, QEII, Halifax on September 10, 2017.

Born in Fredericton, N.B., he was a son of the late Bertha Marjorie Lee and Lewis Dick Black. Michael graduated from RMC Kingston, Ontario in 1961. After Pilot Training he was posted to bases in Canada, the United Kingdom, and the United States. He was Commanding Officer of 404 Training Squadron, Greenwood, and received the Order of Military Merit at Government House, Ottawa, in 1982.

The future for Class of 1961 is certain in that we will downsize over time. There is some certainty that a cadre will be available to celebrate our 60th reunion in 2021. I’m hoping to be there.

As an aside I must tell you the content of my last email with 5026 Gerry Reid before he died in 2017. Gerry knew he was dying and was accepting of his fate although he was worried about his dear wife Teresa. “We’re dropping like flies Ralphie. You might as well be the last one to die from our class.” I sent this on to classmates and received this response from 5132 Alex Bialosh. “If you’re the last one Ralph, turn off the lights.” This is classic black or gallows humour.

Finally, when we get out of the Covid miasma summer will return and maybe Pete will organize another mini, although for obvious reasons he now describes the possibility as a micro reunion.