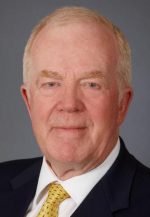 e-Veritas is currently in the process of contacting a number of Ex Cadets who were part of the CWHQ back in the day. Our aim is to ‘Share Memories’ with articles in e-Veritas.

Who was the Comdt during your time in CWHQ?

Is there a particular memory (or more) of dealing with the military leadership?

As CWRO, I spoke for the CWHQ when MGen Anderson announced his decision to convert the Martello Tower on Point Frederick to a museum.

My complaint was to advise that that site was traditionally the center of cadet weekend social activity in the absence of which cadets would be very disappointed.

The Commandant thanked me for my advice, noting its impolitic nature! Years later, in my role as a federal deputy minister, Bill Anderson came calling in his role as Chairman of the Ontario Public Service Commission. Our business was respectful and cordial ( but I was tempted to complain again on behalf of all those cadets who lost the use of a terrific place to dance and romance!).

Was there a key person who provided coaching / mentor-ship to you? Does anything still stick out from that mentor-ship?

Over 25 years later, my son, Raymond, entered RMC and who was formally assigned as his mentor – none other than Dr. Binhammer! Sadly, before my son graduated, Dr. Binhammer retired.

The highlight was the magnificent graduation ball that Johnny Lawless, the A/CWRO, and I planned and organized – great fun!

The low point, apart from the museum incident was my failure to get agreement to the sale of beer and wine during restricted hours and with restricted privileges (third and fourth years only) for the cadets’ mess.

Is there anything else that you would like to mention?

Through the academic year, we had some great parties! That year too, our varsity football team actually won two games!

The most formative years of my life! And, my pals from those years are among my best pals today – a handful of them have passed away but my fond memories of them endure.

9253 Stan Jacobson - CWTO experience paid off down the road