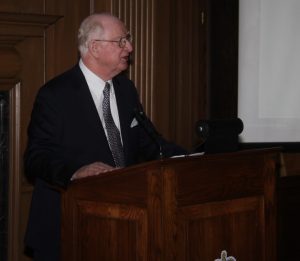 This year’s graduation festivities began on a special note with a “family reunion” of those who’ve been on the RMC Mottershead Battlefield Tour over the last two years. This event formally recognized the contributions of 5586 Ian Mottershead (RRMC/RMC 1962) who along with his wife Rosemary have singlehandedly ensured that the Battlefield Tour will remain financially viable for years to come. (Mr. Mottershead is a memember of the Board of Governors Circle for Lifetime Giving ($1 million +)).

As 18777 BGen Sebastien Bouchard, RMC Commandant, explained, “When I came here as Commandant the Battlefield Tour was cancelled. The money was still there for it but it wasn’t going forward. So we said if we’re going to do this we’re going to do it forever, and with the help of Mr. Mottershead that’s a reality.” The Tour has expaned greatly in its scope since it began in 2003. “We’ve operationalized it. It’s a course. And it won’t be cancelled again.”

BGen Bouchard then presented Mr. Mottershead with his souvenir coin from the Tour, the one all participants receive when the week-long event is over. “I guess it really is your coin,” the Commandant joked. “It’s got your name on it.” (Mr. Mottershead was a participant in the Battlefield Tour in 2013.)

In humble fashion, Mr. Mottershead explained that the credit is not all his to take. “Sometimes you have the right person in the right place at the right time to get it done and that’s been BGen Bouchard.”

Mr. Mottershead also took the opportunity to recognize G0872 Maj (ret’d) Dr. Michael Boire, who is retiring this year and who has organized the past sixteen Battlefield Tours. “In 2003 you had to practically convince the Cadets to go along. Now there are far more interested each year than there are spots on the Tour. Throughout it all, you’ve cared for the welfare of the Cadets on each Tour and also that they learn their history. You will be missed.” 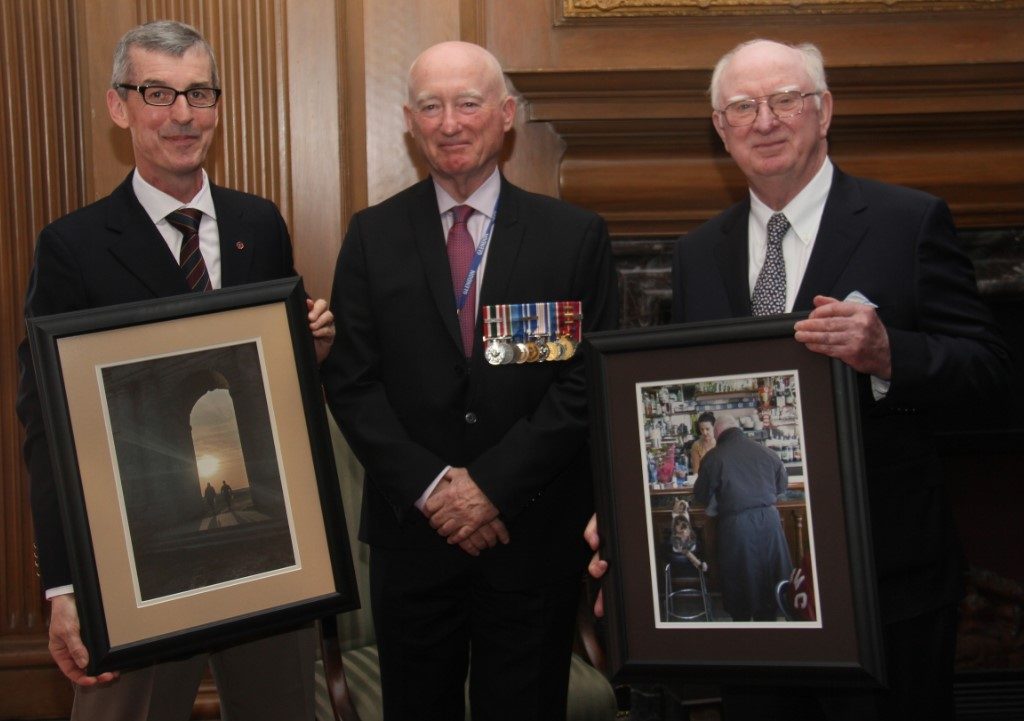 27449 OCdt (III) Rees van den Hoeven summed up what the RMC Mottershead Battlefield Tour means for those Cadets lucky enough to go. “The Tour is really a mini version of RMC,” he said, “and I say that for two reasons. The first is how the experience grounds you in duty and tradition. You see the cemetaries and the battlefields and it’s humbling to realize how much those who went before us sacrificed and that we might be called on to do the same. The second reason is the importance of friendship and companionship. This is something you do together, with your friends. You’re on a bus with these people for over a week. It’s a very emotional experience to realize that those sitting next to you might have to make that same sacrifice just the same as you might have to.”

Dr. Kevin Brushett closed the family reunion off by acknowledging all those, from the RMC Foundation to the history department professors and staff, who help make the RMC Mottershead Battlefield Tour possible each year. “It may look very professional on the surface, but there’s a lot of work that goes into it,” he said.