“I suspect Cadets today are somewhat embarrassed to wear the poxy box in public, as I was over half a century ago.”

6439 Hugh Spence (CMR/RMC 1965) first learned of the Canadian Military Colleges when he was in grade 9 or 10. As he recalls, “I had to give an oral presentation on an academic institution based on a random pick from a large selection of academic calendar books lined up on the blackboard rail.  I happened to pick RMC’s.” His reasons for applying were simple enough. He was interested in military history, he had several military forebears, and he was also in Sea Cadets where the senior staff officer happened to be a navy recruiter. As he explains, he had also “come to dislike high school and wanted to get out of having to go through Ontario grade 13.” As Ontario students were accepted for CMR’s Prep Year after Grade 12 back then, he applied, was accepted, and entered CMR de St. Jean in 1960.

Hugh arrived at CMR during the National Film Board filming of a Canadian Military College recruiting film and as a result had to “debus” three times while being loudly harassed by senior Cadets in scarlets. As he recalled, little else from his time at CMR stands out now except pride in being a 3-bar and then a 4-bar in his final year there before making the move to Kingston. “Mounting guard on the ramparts without ammunition in my spit-shone rifle magazine and with only a chromed ceremonial bayonet to protect the College (and me) during the FLQ crisis stands out the most,” he said.

Like many Cadets, Spence had his challenges to overcome. At CMR, as he explained, “It was learning French fast.” As he joked, “It was not just French immersion but French coercion.” At RMC, in contrast, it was “staying awake in class and avoiding in Third Year the petty harassment of certain overweening seniors.”

As Spence also recalled, it was another era at RMC back then: “The fine practice of mentoring was not in vogue at the time; it was sink or swim sans aide.” As a result, there are few staff who stand out for him, with the exception being then Commandant of RMC Air/Cdre Len Birchall who was “a legend in his own time and then in mine and a fine fellow for a Cadet to talk to.” 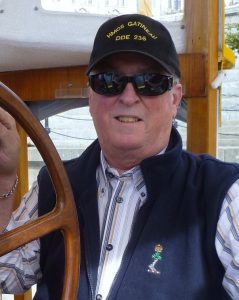 After graduation in 1965, Hugh Spence spent six months doing his navy Pre-Fleet training before spending a year and a half on sea duty as a S/Lt watchkeeper and ship’s information officer aboard the destroyer HMCS GATINEAU based in Halifax. In early 1967, he was posted to the Regional Information Office in Esquimalt, B.C., to work on DND public relations efforts for Canada’s Centennial. Following his promotion to Lieutenant, he was posted to DNDHQ in 1968 to work as a public enquiries officer and then head of the DIS photo/film shop. “I escorted press/media on tours, attended NATO meetings and military exercises with the media,” he explained. “I actually submitted my resignation from the Forces while acting as the admin and escort officer for an NFB film crew recording army and air force activities in Germany for a recruiting film. How’s that for a bookend to my military career?”

With his military service behind him, Spence moved on to serve in a number of roles in the civilian world, including as a senior admin with St. Lawrence College of Applied Arts & Technology; with Transport Canada public affairs as the marine liaison officer; with the Atomic Energy Control Board as the Chief of the Office of Public Information (from which he retired in 1997) and as a PR consultant until 2003.

Hugh Spence has remained heavily involved with his class over the years. “I was ‘elected’ Class of ’65 Secretary for Life at our very first reunion in 1970 which I organized, being a Kingston resident at the time. I have organized nine reunions since then and I am looking forward to our next one in 2020.”

Like many older ex-Cadets, he also has strong opinions about the College today. “For the past twenty years or so,” he said, “Cadets don’t seem to have been taught how to wear the pillbox properly, which makes them look idiotic and they don’t seem to even realize that.” He added, “I suspect Cadets today are somewhat embarrassed to wear the poxy box in public, as I was over half a century ago.”

Ex Cadets and More in the News

The Reunion - Sixty Years On