Club in Woodbridge, formerly the Board of Trade.

Not only is this course an exceptional ClubLink course but the Club House and staff provided top notch service and food.

The catalyst for the tournament was 11623 John Carswell (Class of 78), President of Canso

Investment Counsel Ltd. who proposed to host a golf tournament which would honour two ex-cadets who were not only exceptionally successful in business but who also served on the RMC Foundation’s Investment Advisory Committee. 15622 Jason Donville (Class of 86) President and CEO of Kent Donville Management Inc. very quickly came on board as a co-sponsor for the event. It was felt that the most appropriate manner to honour John Bart and John van Haastrecht was to share the proceeds of the tournament between the RMC Foundation and Princess Margaret Foundation for cancer research.

Building on the previous tradition of the Toronto Branch Golf Tournament, no less than 40 ex-cadets were in attendance along with friends and family of the two honoured ex-cadets as well as excellent representation from the co-sponsors companies. Overall, it was a very promising start to the reinvigoration of an RMC alumni tournament in the Toronto area.

22350 Nic Desjardins (Class of 2002) of Canso did an amazing job as the lead event coordinator while being ably supported by a small number of Canso employees. 25397 Jhordan Dorrington was the most junior ex-cadet (Class of 2012) in attendance but he managed to impress everyone while presenting a rather generous number of tournament prizes in an amusing and entertaining manner. While there was some outstanding golf played, there also seemed to an abundance of honest golfers who confirmed that TDV is alive and well. 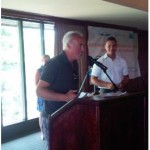 closest to the pin hole, he made it impossible for anyone else following his foursome to win. He is to be congratulated for making his first ace and on an occasion with many credible witnesses. To say that he was a little excited would be an understatement in the extreme. Now if only there had been a car to win!

This was definitely a first class event and one worthy of attending next year! Thanks again to the two co-sponsors for making this tournament a success and one which will benefit two great causes.