“Nick Goulet has the true spirit of a champion. He is always optimistic, a smile on his face, looking constantly for ways to keep the energy high and the mood light on the team, but at the same time he possesses a serious work ethic. He works and trains hard, stays super fit, faces challenges and problems with positivity and he seems to thoroughly enjoy life. He is a great asset to our fencing program! ” 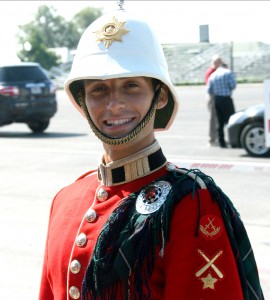 eVeritas – Nick, please tell me a little bit about yourself? What is your background?

Nick – My name is 24198 OCdt Nicholas Goulet, hailing from Ottawa, Ontario and  the current Cadet Squadron Leader (CSL) of Mackenzie (8) Squadron as well as the captain of the Men’s Varsity Fencing Team. I’m a student in the Department of Mechanical Engineering and managed to earn myself a Minor from the Psychology department due to participation in a fifth academic year. Upon graduation, I will complete training at CFB Borden in order to become an officer in the Electrical Mechanical Engineering Branch (EME).

I’ve had the opportunity to experience a wide variety of leadership positions while at the College, including Deputy Class Senior in first year, Class Senior in second year, Deputy Cadet Squadron Training Officer (DCSTO) and Deputy Cadet Wing Band Officer (DCWBO) in third year, CSL of A Sqn during the summer of 2009 and finally Recruit Camp Section Commander (CSC) this August.x 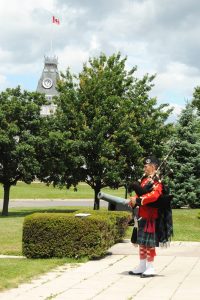 eVeritas – How was recruit camp this summer?

Nick – Recruit camp was a very interesting experience for all involved. I was the lead drill instructor for Lima Flight, which encompassed the recruits of both 11 and 12 squadrons and was housed in Fort Haldimand. The focus of the camp was teaching the first years the basic principles of the military lifestyle and helping them make the transition from the civilian world. This camp was aimed at both RMC cadets as well as the Civilian University ROTP entrants, who left before the start of FYOP.

I was extremely happy that the lady and gentlemen cadets of the College, such as myself, were trusted to instruct subjects such as drill to the new recruits (under the watchful eye of the Division Sergeant Majors, of course) and it always brought me great pleasure to witness the moment of understanding on the candidates’ faces when they finally mastered this new skill. In addition, Otter Squadron provided some of their very experienced UTPNCM members to act as Cadet Flight Leaders (CFL) for the course, keeping us on the straight and narrow and ensuring that our actions were in line with the intent of the Recruit Camp commander and the Canadian Forces in general.

eVeritas – What are you most looking forward to in this year?

Nick – The perpetual optimist, I am looking forward to a great variety of events that will be occurring in the next year. I will soon be participating in the Canadian Selection Circuit, a national fencing tournament that will be held in Saskatoon at the end of September, in the hopes of testing my skills against fantastic athletes and preparing myself for possible participation in the CISM World Games in Rio De Janeiro in 2011. I am also greatly looking forward to the possibility of playing my bagpipes at the Grey Cup this Fall in Calgary, Alberta should the Pipes and Drums of the Royal Military College of Canada be invited to attend. 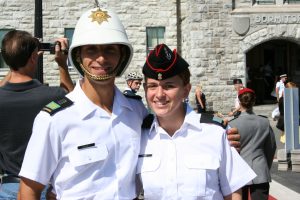 eVeritas – What are your best experiences at the College?

Nick – I am very grateful for the skills I’ve managed to acquire while at the College in non-academic pursuits. I had never even considered participating in fencing until I tried out for the Varsity Fencing Team in first year and was chosen to be a member of the sabre team, one of the three weapons which make up this elusive, but rewarding, sport (The other two being foil and épee). I immediately developed a love for the sport: the athleticism, the strategy, the quick decision making and of course, the requirement of hitting your friends and comrades with swords. Working up a sweat in the Old Gym, lunging and slashing and flinging to my heart’s content while the theme to “Pirates of the Caribbean” plays in the background has become an integral part of my workday.

Another integral part of my day is playing the bagpipes. With very little prior musical knowledge I took up the pipes in second year and have never looked back. Although it was difficult, even shameful to practice this noisy instrument at the beginning (There were quite a few complaints of the racket of cats being spun at high velocity out at the point) I have taken an affinity to it and now feel quite proud to wear my Highland 5’s around the campus.

Finally, I had a great time this past summer as the CSL of A Sqn. I had the honour of acting as Parade Commander for the Commandant’s Change of Command and participating in a day of skylarks around the campus to give Brigadier General Tom Lawson the send off he deserved. I also had the opportunity to take a small group rappelling off of the RMC tower and out of a Griffon helicopter in support of the Advanced Mountain Operations course. 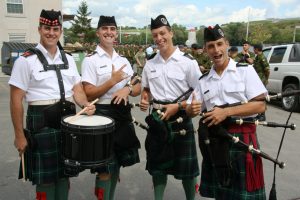 My philosophy is that, as long as you engage with your surroundings, life at Royal Military College of Canada can be an unbelievable adventure that I would recommend to just about anyone… even if it does take you a while to get through it all.