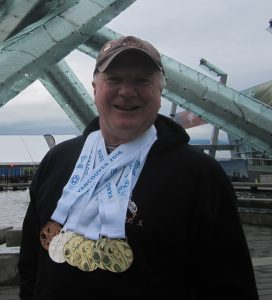 Caption: “The hair is grayer, the cheeks are fatter and my Speedo is 6″ larger, but one thing that hasn’t changed – I can still get off the start blocks. I can thank the College for that!”

Another in our series – from back in the day. This particular article has Don Kennedy CSL for 2 Squadron 1971-72, ‘Sharing Memories’.

Who was the Commandant and his right hand man back in those days?

BGen Bill Lye (a tough customer, but at least you knew where you stood) was the Commandant and his D/Comdt was Bud White.

Is there a particular memory that still sticks out with your dealings with the military leadership?

When the Squadron Commander called me in to ask me to spy on my classmates who may be doing drugs…nice!

Any particular high and low points?

High point – completing the Recruit Obstacle Course with the CWHQ gang the day before the newbies went through. Also, conducting the Wing Drill Competition routine without a word of command. Brilliantly trained by Dave Bindernagel.

Oh yeah, I almost forgot about beating Queens in waterpolo at the annual Queens/RMC Sports Night; scored two goals in the absence of our premier power player, Rick Douglas, who was off trying to make the ’72 Olympic Swim Team. That boy could swim!

Low point – see above. Mr. Clifford Watts was an excellent mentor and helped me come to grips with some of the more distasteful things.

Fourth year was tough. I almost failed academically. Thank God for ‘Boomer’ and Dr. Kirk. Both gave me a wee shove with my marks.

Writing and reviewing the performance evaluations on all the squadron cadets was almost overwhelming and took a big chunk of time that I should have been dedicating to my Civ Eng courses.

I shed no tears the day I packed my gear and left the College; I was exhausted. I am, however, grateful for the chance to have attended RMC. I still keep in touch with several of my peers from my recruit intake; the stories keep getting better every time we gather to spin the lies.

One of the toughest decisions to make for a CSL was drawing up the roster of 2 Sqn grads that would get to carry a sword on Grad Parade. There are still a couple of lads that are unhappy with my decision. It has haunted me ever since.

9253 Stan Jacobson - CWTO experience paid off down the road