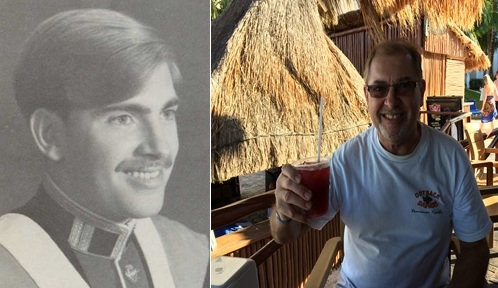 David Snook was an Ottawa boy who graduated from Woodroffe High School prior to taking the big step of entering military college.

“My parents couldn’t afford to send me to a civilian University and, more importantly, I didn’t have a clue what I wanted to study. I thought going to MilCol would help me decide what to do with my life, and it most assuredly did.

I entered RMC in 1969. Memories: the silly and often humiliating razzing that took place in Rookie term; running circles that I didn’t think I’d earned; the sore muscles I got from whipping my weak, skinny body into shape, and the resulting pride of accomplishment.

I graduated from RMC in 1973, with a B.A. in French Language and Literature. Memories: the camaraderie, teamwork and strong sense of belonging that led to the establishment of several close friendships, which have strengthened and endured over the decades; being a “dictator”, coach, teacher and mentor all rolled into one, when serving as Recruit Flight CSC; practicing and playing in a rock band at dances in the Cadet mess with a classmate of mine, Paul Rand and two Frigateers who were two years behind us -Mike Nelson and Ted Smith; being manager of the Rep Volleyball team and travelling around the province with them.

I think my biggest challenge was learning how to stay on top of all the demands that were placed on my energy and time by the rigorous physical fitness, academic and military programs at the College, and how not to let them drag me down. In retrospect, I doubt I could have done this without the support and encouragement of my buds, particularly in first year.

After Grad, I attended  MARS IV training, and then served the last three years of my commitment at NDHQ in the B & B program, where I compiled several bilingual lexicons of naval terminology. The highlight of this experience was being able to hone my second-language skills in a work environment that was largely composed of Francophone colleagues. This served me very well in my subsequent I 38-year Public Service career.

As a civilian, following a four-year stint as a terminologist and project coordinator in the Secretary of State’s Translation Bureau, I spent the bulk of my career in the federal Ombudsman world. I conducted and then directed administrative investigations in the Office of the Official Languages Commissioner (20 years) and the DND/CF Ombudsman’s Office (four and one half years).

After retiring, I helped set up the investigative function for the new Veterans’ Ombudsman Office and served as the first Ombudsman’s acting Director of Investigations.

I have been Class Secretary of the the Class of 73 for about 25 years. I helped the original Secretary, Ian Mack, organize our first four Reunions, and then the Class “elected” me to take up the mantle after Ian became very busy in his naval career. I welcomed the opportunity, and have enjoyed the challenge of keeping track of Classmates over the years.

After my retirement in 2007,  I moved down to the Niagara Peninsula where I keep busy doing volunteer work, serving on the Community’s  Board of Directors, playing guitar and singing in both a folk duo and a basement rock and roll band, jogging, hiking and, of course, travelling.”