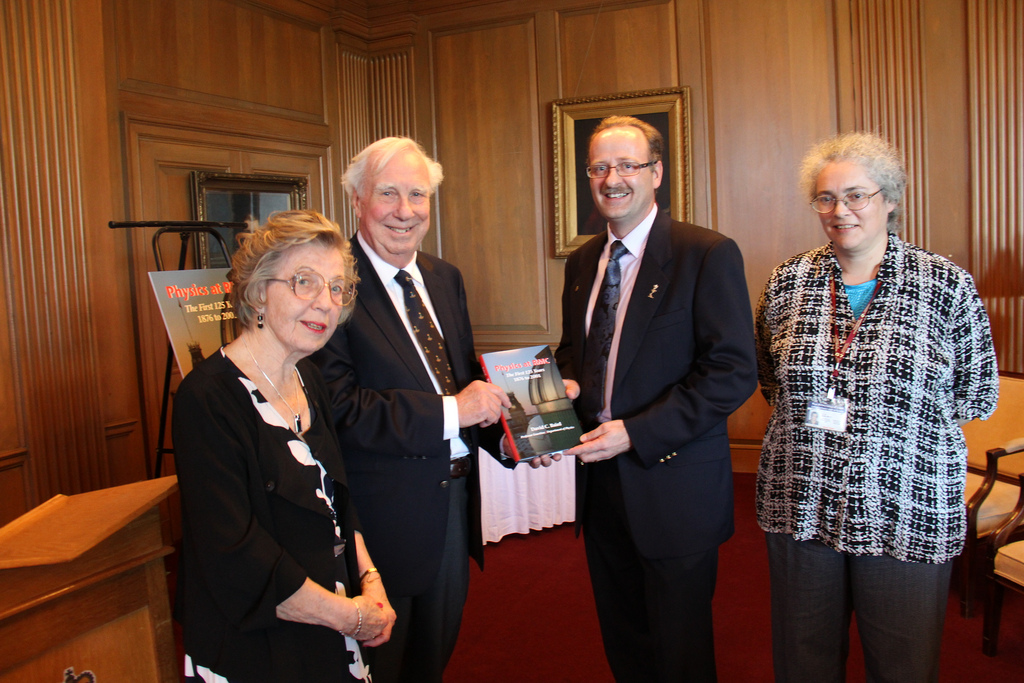 On 17 September at the Senior Staff Mess, RMC’s own Dr. David Baird celebrated the official launch of his book, Physics at RMC, The First 125 Years, 1876 to 2001. The distinguished event was very well attended by the Baird’s family and close friends as well as the faculty and staff of the College.

During the ceremony, Baird’s formally presented a copy of his book to the Royal Military College of Canada which was accepted by RMC’s Principal, Dr. Harry Kowal and RMC’s Chief Librarian, Ms. Sarah Toomey.

The book’s genesis started well over a decade ago and then gained momentum during the 125th Anniversary celebrations of the College. Early on in the process, Bill Oliver provided not only encouragement but he freely shared his publishing experience. This led to the requests for contributions for additional material which Bill facilitated through eVeritas. After the book was starting to take shape, Bill published excerpts from the Dr. Baird’s book in eVeritas which were received with an abundance of enthusiasm from Club members. This enhanced profile led to a very generous offer from the Toronto Branch of the Club to provide funding to make publishing the book a reality. The Past President of the Toronto Branch, Michael Gainer and the current President, Mr. Peter Fosbery, along with all members of Toronto Branch are to be commended for their incredible support.

While this endeavour was very much a marathon, it concluded with a magnificent but no doubt exhausting sprint to the finish. Both Dr. Baird and his wife Margaret, who played a pivotal role in polishing the final text and the layout, should be justifiably proud that the book has finally reached its culmination.

More photos from the book launch

Dr. Baird will be available at various times during Reunion Weekend to personally sign his just released book. The plan, depending on weather is to have a tent in front of Panet House for the signing. Exact timings are not available, at this time, but there will be signs posted at the tent with scheduled times.