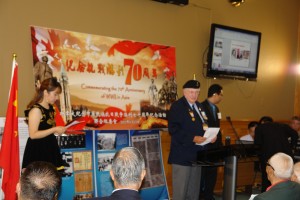 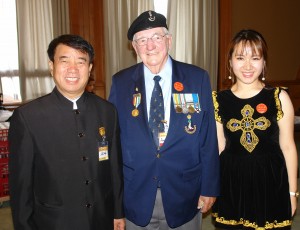 THE CHINESE COMMUNITY IN TORONTO COMMEMORATES THE END OF THE WAR IN THE PACIFIC AND THE HISTORIC “BATTLE OF HONG KONG” DECEMBER 8-25, 1941

I had the honour of being invited to be one of the guest speakers at a recent commemorative event held in the Legislative Assembly of Ontario Building, Queen’s Park,Toronto, on August 13th. The ceremonies marked the 70th Anniversary of the end of the War in the Pacific and the end of World War II on August 15, 1945. Ceremonies were held around the world that day, including in Ottawa, London, and Tokyo.

Many high-profile people from the Government of Canada, the Province of Ontario, the City of Toronto, and the Consulate General of The People’s Republic of China were present, along with official representatives of many associations within the Chinese-Canadian community. The media coverage was huge.

The HKVCA is made up of veterans and the families, relatives, and friends of the almost 2,000 brave Canadians who fought at Hong Kong in December of 1941. Only 25 veterans of that epic battle are still alive. The few who are still able to travel were attending the HKVCA’s Annual Convention in Ottawa and therefore none could attend the ceremonies at Queen’s Park.

With the expectation that the British Garrison in Hong Kong would soon come under attack, Canada sent two battalions, the Royal Rifles of Canada from Quebec City, and the Winnipeg Grenadiers from Winnipeg, to Hong Kong to bolster the local British and Chinese defence forces.

My brother Ken, having enlisted in the Royal Rifles at age 16, was among those Canadian troops. One could lie about your age back then and get away with it.

The Japanese attack began on December 8, at the same time as Pearl Harbour came under attack. The Battle of Hong Kong had begun. It was the first engagement of Canadian ground forces in World War II. The defence forces fought courageously but, being out-numbered ten to one by the Japanese Imperial Army, their 17-day war ended in the trenches on Christmas morning,1941.

Nearly 300 Canadians died in that battle, 500 were wounded, and 260 more would die in the extremely harsh conditions in the Japanese POW camps in Hong Kong and in Japan. I visited both military cemeteries in Hong Kong (Sai Wan and Stanley) on several occasions over the years. It is an absolutely unforgettable experience to walk among the tombstones and read the ages of the dead: 17, 21, 20, 19, row, after row, after row. So young. So brave. So sad.

Veterans of the Battle of Hong Kong never forget two dates: December 25, 1941, the day they began their nearly 44 months as POWs, and August 15, 1945, the day they regained their freedom. Miraculously, my brother survived, but when he was liberated he weighed only 68 lbs. Upon his return to Canada he went almost directly into McGill University, married a medical studies classmate, and became a highly-respected physician and surgeon. His book, “Guest of Hirohito” about his wartime experiences, was translated into Chinese and Japanese. Ken enjoyed a good life but passed away in February, 2007.

The focus of the rest of my address at Queen’s Park was the need for remembrance to remain important through time because our freedom came at such a very high cost. I maintain the same focus, in my current role as an educator. I make sure that the many students from Mainland China whom I teach get to know about the Battle of Hong Kong. They are usually entirely unaware of this Canadian contribution to the War in the Pacific.

I do likewise when I am speaking at Remembrance Day services, as I have been doing for the past few years at the Humber Institute of Technology and Advanced Learning in Toronto where I teach and elsewhere. I never allow the Battle of Hong Kong, nor the contribution of Canadians in the Korean War, to be forgotten on such occasions.

The People’s Republic of China used the commemorative occasion at Queen’s Park to present their newly-minted “China Peace Medal” and accompanying Certificate to a number of Chinese veterans of the Battle of Hong Kong, including several former generals. The “Certificate of Peace Medal” proclaims:

“FOR YOUR OUTSTANDING AND DEDICATED SERVICE IN ASIA THEATRE IN THE WORLD WAR II,

FIGHTING AGAINST THE JAPANESE INVADERS, PROTECTING PEACE AND PROMOTING FRIENDSHIP

I accepted a China Peace Medal and Certificate in my brother Ken’s name and I will be delivering them to his widow, Eileen, and their two daughters, Marie and Noreen, in Vancouver.

The Ambassador of the Government of China presented China Peace Medals and Certificates to the surviving Canadian veterans of the Battle of Hong Kong at the HKVCA Annual Convention in Ottawa.

I wonder if China decided that, because the Republic of Korea several years ago issued a similar “Peace Medal” to all who had served in Korea, China should follow suit. Of course, we were on different sides in Korea!

Coincidentally, as I was editing this piece, a news broadcast on radio was telling us that “the two Koreas” were shelling each other … again.

Philosophically, one might ask, if there is a “next time”, who will be on whose side?

I see it as our duty to forever remember those who fought for our freedom.

We ought to also remain forever committed to preserving within Canadian history the enormous sacrifices made by our troops at “The Battle of Hong Kong”.