The two infantry captains had made the two-hour journey by car from their station at the University of Massachusetts Amherst’s Reserve Officer Training Corps Offices to Hanscom Field near Boston.  Their destination was the officer’s club on the base.  They’d be attending the annual West Point Founder’s Day dinner.  It was March 1980 and the return trip to Western Massachusetts promised to assure return after midnight.  Why, after a full day of work would the captains in Class A uniform make the effort to travel across Massachusetts late in the day extending an already long duty day past midnight?

The answer was the guest speaker.  Lieutenant General “Jumpin Jimmy” Gavin was the keynote speaker.  James Maurice Gavin was a World War II legend and famed commander of the 82nd Airborne Division during that war.  The general had an iconic appeal to the two infantry captains.  But the captains had another and professional purpose.

Both officers had enrolled in the Command and General Staff Officer’s Course. through the U. S. Army Reserve Center School at Westover Reserve Air Force Base in Chicopee, Massachusetts, a 20-30 minute drive south from the university campus.   This was a six-phase course.  When completed it would meet the same professional development requirement that competitive selection for resident attendance at the U. S. Army Command and General Staff College at Fort Leavenworth, Kansas would meet.  (Though enrolled in the course, one captain would complete it and the other would complete half of the requirements, the latter being selected for the resident staff college, completing the course at the college.  The former would later be selected for the resident Naval War College attending and graduating from that college.)

The captains, both Regular Army officers, considered enrollment in the Reserve Center course as professional insurance to assure they had met the course requirement if by any chance they were not selected for the resident course. The phase they were in at the time of the Hanscom Field Military Academy Founder’s Day dinner event had a section that required reading, discussion and comment about the Battle of Schmidt.  This battle was a particularly sanguine and bloody contest fought primarily in the Kall River Gorge by the 28th Infantry Division during the heavy fighting in November 1944 in the Hürtgen Forest along the Belgian/German Border.  The 109th, 110th, and 112th Infantry Regiments and several engineer battalions would suffer extensive casualties in this combat. The 112th infantry would suffer the heaviest losses.  The battle took on nightmare proportions as fierce and continuous combat occurred throughout the hours of darkness.

As a study in leadership, planning and execution, the battle provided an abject cautionary tail on the consequences of pursuing a flawed plan…especially the cost in lives lost, a tragedy to be avoided.  The importance in the captain’s minds of being able to get some “real” perspective on Schmidt from someone associated with the battle seemed well worth the cost of travel to and late return from Hanscom Field. The keynote speaker was commanding the unit that ultimately secured the gorge and Schmidt.

The captains hoped that General Gavin would be gracious enough to entertain their questions and share his insight regarding the battle.  They would not be disappointed.

After the dinner the captains were able to approach the guest speaker and engage him in separate conversation.  They were immediately taken by his approachability.  He spoke to them as if peers.  There was no condescension or aloofness.  An easy dialogue ensued, the captains, despite the easy manner of the senior officer, remaining careful to not overstep their station.  The resulting discussion would remain in the minds of both junior officers throughout their following careers.

The general was 73 at the time.  He did not look his age.  The captains, both airborne ranger infantry officers kept fit, running five miles daily along with other fitness activity and maxing the Army’s annual physical fitness test.  They were both taken by the general’s appearance. He looked much younger and seemed exceptionally fit, still up to commanding a force in combat.

As the discussion developed, the general shared comments that took the form he had written into a published article in an earlier December 1979 American Heritage magazine issue.  The comments delivered by a person that witnessed what he spoke about made a deep impression on the captains.  In the general’s words his impressions as he entered the Kall River Gorge follow.

“General James M. Gavin, on the Battle of Huertgen in 1944 (EXplorPAhistroy.com):

Having been preoccupied with the Battle of the Bulge, the Allies had paid little attention to the Huertgen Forest for the past several months. I found a road that a jeep could travel on, and went to the town of Vossenack on reconnaissance without meeting any enemy. The Germans presumably had withdrawn to the Roer River or very close to it. I left my jeep in the town and started down the trail that crossed the Kall River valley. I was accompanied by the Division G-3, Colonel John Norton, and Sergeant Walker Woods. It really was a reconnaissance, since I did not know what the lay of the land would be, and what, if any, enemy might still be there.

Our orders for the following day were to attack across the Kall River valley from Vossenack and seize the town of Schmidt. By now most of the snow had melted and only small patches remained under the trees. I walked down the trail, which was obviously impassable for a jeep. It was a shambles of wrecked vehicles and abandoned tanks. The first tanks that had attempted to go down the trail evidently had slid off and thrown their tracks.

In some cases tanks had been pushed off the trail and toppled down the gorge among the trees. Between where the trail began outside of Vossenack and the bottom of the canyon there were four abandoned tank destroyers and five disabled and abandoned tanks. In addition, all along the sides of the trail there were many, many cadavers that had just emerged from the winter snow. Their gangrenous, broken, and torn bodies were rigid and grotesque, some of them with arms skyward, seemingly in supplication.

They were wearing the red keystone of the 28th Infantry Division, the “Bloody Bucket.” It evidently had fought through there in the preceding fall, just before the heavy snows. I continued down the trail for about a half a mile to the bottom, where there was a tumbling mountain stream about six feet wide. A stone bridge that once had crossed it had long since been demolished, and a few planks were placed across the stone arches for the use of individual infantrymen. Nearby were dozens more dead.”

His assessment of the battle that preceded his arrival at the gorge is summed up in the following comment.  Given the cost in lives witnessed by the general after the fact, his is a sobering statement of where senior leaders of experience and ability may fail and do so at great cost to life.

“December 1979 American Heritage article “Bloody Huertgen: The Battle That Should Never Have Been Fought” by General James M. Gavin:

“When the intercepts were suddenly brought to a stop by Hitler’s ban on all radio communications, no one seems to have questioned what was going on. Hitler therefore was able to assemble twenty-one combat divisions, including eight Panzers, without the Allies knowing anything about it. In retrospect, this seems unbelievable, but all three events were closely related—the unbridled optimism of the high command, the discontinuance of the radio traffic of the German formations, and their ability to organize a major counteroffensive. Thus, to the Germans, the battle of the Huertgen Forest was Phase One of the Battle of the Bulge.”

But the more immediate leadership insight gained by the captains from their distinguished discussion host was the manner a senior leader of note could take to be approachable and available to officers well his junior and share vital lessons learned and observations in a manner that resonated over generations.  Also communicated in a way unexpected and poignant…as the senior officer recounted his memory of seeing the 28th Infantry Division patch on so many dead American soldiers as they emerged from the snow that had previously covered them, a warrior who had seen battle, there was the slightest break in his composure as if his heart was speaking. The captains immediately felt the emotion.

The discussion concluded, the captains thanked their gracious and distinguished mentor of the moment.  They had a long late drive back to Western Massachusetts.  For awhile they drove in silence, both reflecting on the wordless message about the ghost soldiers of the 28th Infantry Division, a unit that had had a tough fight across the beach at Normandy and would later be at the point of the spear when the German Army attacked into Belgium in the following December of 1944.

This proved a huge miscalculation in the event.  The allied intelligence failure to detect a huge German build up and movement against this very point of “little activity” would have severe consequences for the two divisions positioned along this sector.  It was the sector where a battered veteran division attempted to refit and a newly arrived division from the United States, the 106th Infantry Division, continued its training.  The divisions would take the full weight of the advanced elements of a 20 division plus juggernaut.

Yet, despite being overwhelmed by superior numbers and taken by surprise thanks to the faulty intelligence assessments, the 28th Division’s units refused to succumb and fought tough delaying actions withdrawing as stubbornly as possible to buy time.  Despite being barely a month from the ravages of the Kall River fight, they still fought and fought hard.

But General Gavin’s comments brought home the human cost.  He personalized the price that could be exacted from a combat unit, especially if intelligence failed it.  He made a most eloquent if unintended comment to a senior leader’s reaction to the loss of brave young soldiers who could have been served better by their leaders.

The captains would both continue in service. One would serve for almost thirteen years the other fourteen years of active duty retiring as senior field grade officers.  The comments and shared insight from General Gavin would inform much of what they did in their following careers.  His comments to the ghost soldiers wearing the red “keystone” patch, the “bloody bucket,” emerging from the snow in the Kall River Gorge remained imbedded in their minds. 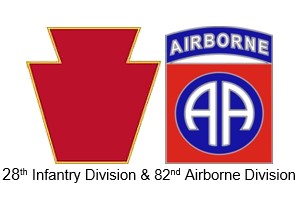