A History of La Chasse-Galerie – Part 7 –

Not long after the 2006 trip, I was approached by 7282 Rick Gilleland at a luncheon of the Vancouver Island Branch. Rick had hosted a table of cadets at the 2000 Legacy Dinner and remembered the late night antics of the first Chasse-Galerie crew. We looked out from the Naden Wardroom across a grand vista of the Salish Sea to the Olympic Mountains and imagined the old days when the great canoes sailed these waters (and still do!) We had talked before about paddles but now we finally got serious. He knew a Kwagiulth carver, Jason Hunt, in Port Hardy. Jason is a younger member of the famous Hunt family, who carved the totems in Victoria and in many other places. Rick’s idea was to ask Jason to carve ceremonial paddles which could then be auctioned off to raise funds for La Chasse-Galerie.

I liked the general idea but as soon as I learned the probable cost of each paddle, I thought that we had little chance of selling many, let alone making a significant profit. However, I became very keen to commission a ceremonial stern paddle for myself. Steering the big canoe with a regular paddle was hard work. We needed one that had a large blade and was as tall as a man.

Rick and I exchanged several messages with Jason, who agreed to take on the commission. We suggested that he come up with a design using symbols from Kwagiulth culture to represent the three branches of the armed services. At our first meeting he proudly unveiled a paddle-shaped drawing. An eagle represented the Air Force, an orca the Navy and a frog the Army. “A frog?” I asked. “Yes,” he replied. “The frog is a very important part of our culture. It often appears as a support at the bottom of our totem poles.” I glanced at Rick and realized he felt the same way I did. I suggested that an amphibian would be more representative of the Marines. Rick understood that the frog was Jason’s family symbol and that it represented change, something which the Armed Forces has been learning to accommodate. However, Rick felt that the idea might be too abstract and that it might not resonate with Canadians beyond the narrow confines of a First Nations community on the west coast. I concluded by recognizing that the frog was indeed an important part of his culture but, “what about another noble animal such as a bear or a wolf?” Jason’s eyes brightened. “Oh, yes, the wolf is also important to us.” Rick and I were pleased and relieved. To most people, the wolf represents a strong community of leaders and hunters, an apt symbol for the Army.

He was unsure about the type of wood to use but he eventually settled on yellow cedar because it was easier to carve. I agreed, assuming that generations of west coast paddlers would know what was best. We had reason to rue that decision but that is a story for the 2011 canoe trip.

It took a few years to complete. I didn’t really need it, I told Jason, until the fall of 2011. So in June of that year Jason arrived with a beautifully carved and painted paddle with the eagle-orca-wolf design. He had carefully painted the RMC crest on the shaft. The animals had abalone eyes. It was gorgeous.

At the same time, he finished a similar design for a decal to fit on the blade of a regular paddle. This was a very popular and cost-effective way to turn a simple cherrywood paddle into something spectacular.

Over the years the paddle has received a lot of attention and admiration. It sometimes takes a moment for people to understand the design but eventually they figure out that the upside-down fin belongs to the orca and the eagle tail faces forward. I’m very glad that I’ve never had to explain why a frog represents the Army.

Geoff and Rick Gilleland at the VI Branch Christmas luncheon 2010 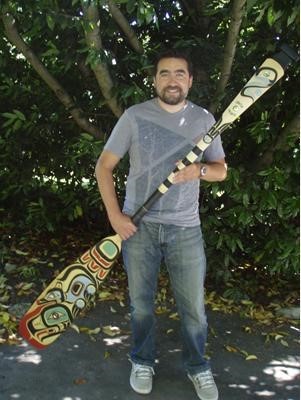 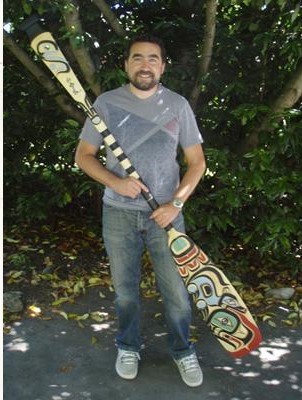 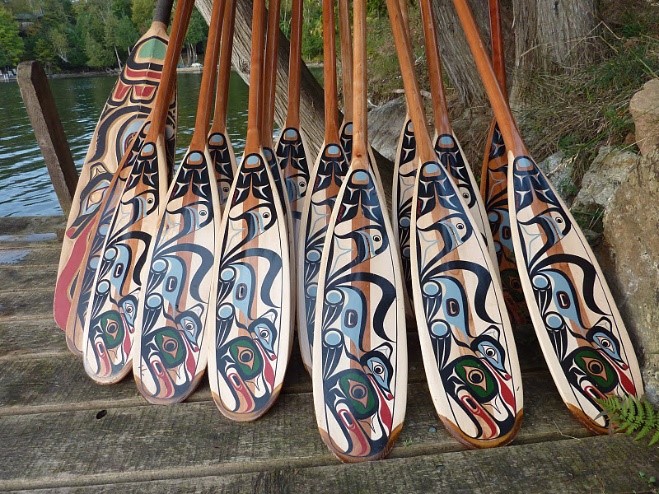 WHEN WAS THE SURGEON’S QUARTERS/COMMANDANT’S RESIDENCE BUILT?.

Leaders must know the “real” requirements and stand up for them