Excerpt from THE MARKER 18 November, 1960 – Article written by Flash 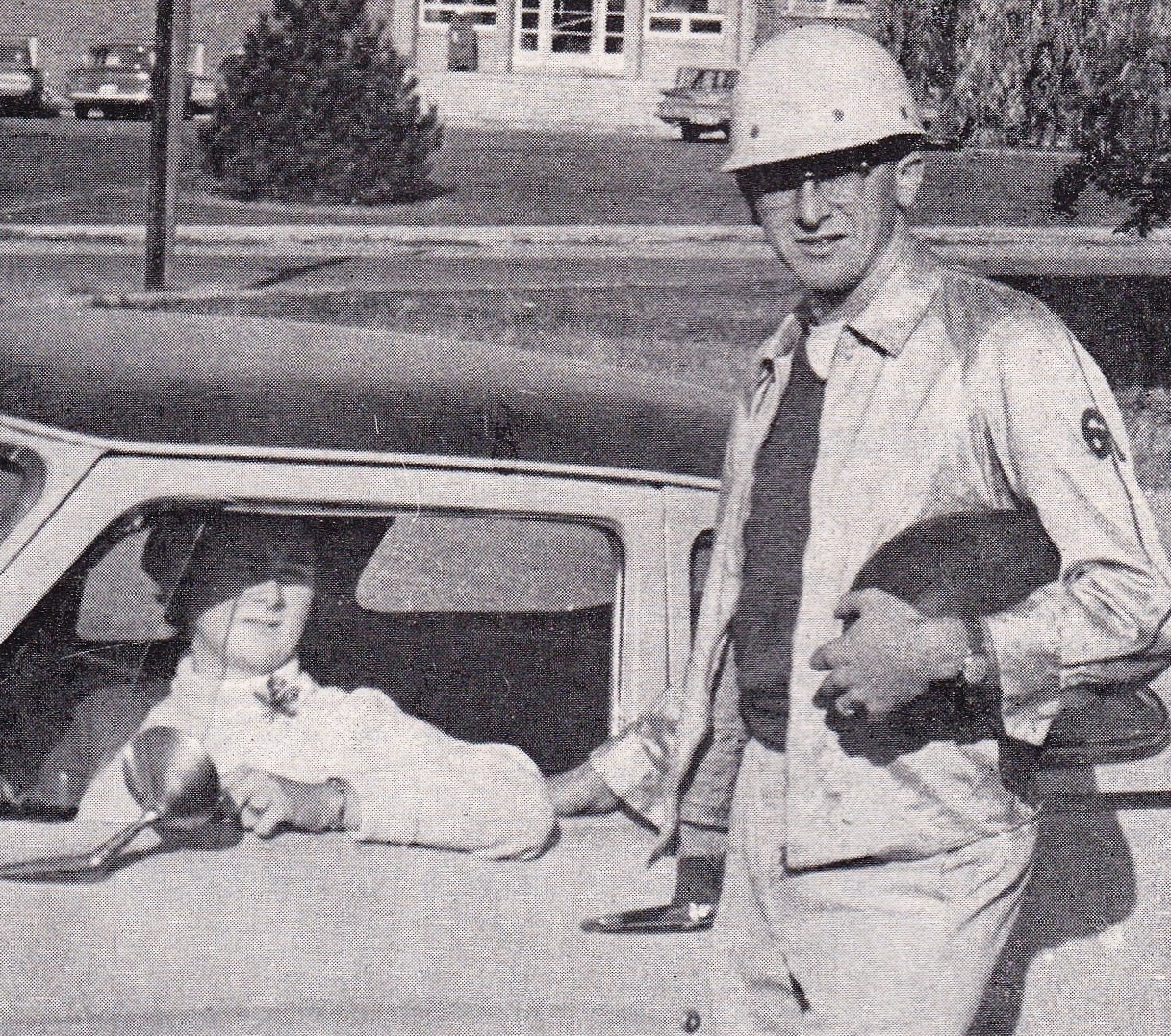 At noon on the 28th of October, Queen’s University began the second of its “traditional” Quarathons. Following a pompous and highly publicized ceremony, the students began the 167 mile run in which they were supposed to carry their historic 1928 football from the 1950 Queen’s University to Hart House in Toronto. However, they were actually carrying the semi-historic ball from the 1950 season because they were “afraid lest the ball should become damaged in the run”. As it turned out, their apprehensions were certainly well founded.

The Quarathoners were doing quite well and by 10:15 p.m. Friday they reached a point a mile outside of Brighton’s main street. The celebrants took no notice of their new member wearing a yellow crash helmet, and Queen’s science jacket; they seemed to take even less notice of him as he helped pose the group for the “victory” photographs.

Shortly after 10:30 p.m., the football was sped on to the next leg of the race by a fresh runner. About a quarter of a mile down the road, the runner spotted our “helmeted engineer” waiting patiently beside a running car at the next “relay point”. He passed the football with the comment; “Boy, am I glad to get rid of this thing…”

The Yellow Helmet and Queen’s jacket quickly disappeared into the waiting car which, driven by the cadet’s younger sister, left in a fashion seldom seen outside of Le Mans. Ed. Note.

This operation was so smooth that nobody actually saw the ball disappear. The first indication that the Queen’s students had discovered the “liberation” came with the radio announcement from the car at the scene that there was a “bit of a problem of a lost runner” – (wearing a Yellow Helmet)

At midnight it was reported that all was well, and the Quarathon was once again under way. (After Queen’s had purchased a new ball at Port Hope.) Security, ha!

Saturday afternoon, November 5th, saw the conclusion of one of the best skylarks perpetrated by the RMC cadets in recent years. I  refer, of course, to the liberating and return of the Queen’s Quarathon football. The occasion picked for the return of the ball was the all-important Queen’s-McGill football game.

Since it was considered too risky to carry the ball to the stadium, being as pill-boxes are too expensive on our salaries, a much better and dramatic method was decided upon… it would be dropped from a plane on a parachute.

Although half time was chosen as the safest time for the drop, this was changed at the last minute, due to the minor riot which was in progress on the field at half time. At about three minutes of the third quarter, a small light aircraft was seen drifting in over the north stadium wall at a good altitude to receive the forward pass which Queen’s was preparing to throw. One would have thought that the pilot was trying to get another ball, rather than return the one we had.

Unfortunately, a combination of factors destined that the ball was never to drop into the stadium. The navigator originally planned to make the drop had to be replaced at the last moment, and the combination of the wind and parachute dropped the ball in the back yard of a house across the street. A thousand pamphlets, of varied colors, did not miss the field in any case, and were well distributed along the length of the field to explain to the crowd the occasion of the visit.

The timing was slightly off, and the ball did not land on the field as intended, but on the whole the entire escapade was very well handled. Skylarks from an integral part of College life, with the conditions that they be original, funny, and do not do any damage to property of any description. This episode can now be added to the tales told of ‘the good old days’ for it has shown a good deal of initiative and daring. Congrats to those who took part.

We Need Your Help in Identifying These Cadets