A new mentor at RMC 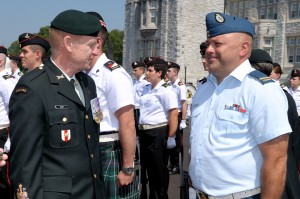 Chief Warrant Officer Tony Slack, the newly appointed College CWO, comes to RMC with a wealth of operational and leadership experience. This is his second posting to Kingston, and CWO Slack is looking forward to being back.

“Kingston is a jewel,” he said. “I’m anticipating a good time. It’s a great opportunity to keep myself young, working with the officer cadets.”

Born in Nottingham, England, CWO Slack was raised in the UK until the age of seven, when he and his family moved to Oshawa, Ont. It was there that he had his first taste of a military lifestyle, as an Army Cadet.

“From there, it led to the militia, and eventually, I joined the Canadian Forces in 1980,” he said.

CWO Slack also had a military influence growing up, as his father was a pilot in the Second World War. His uncle was a bomber crew member who was shot down over Germany during the war, and ended up spending some time as a prisoner of war.

The Chief has been on deployments of his own; the most rewarding tour was his second time in Bosnia, nearly 10 years after the war in Herzegovina.

“The deployment during the war in Herzegovina in 1994 was difficult, to say the least. But I got to go back to Bosnia as part of the stabilization force, and to see the difference that peace makes to a country that was torn apart by war is quite dramatic,” he said. “I was the Camp Sergeant Major for the Canadian camp, so that in itself was good. Any time you get a chance to take care of soldiers, and do good things for them, it’s very rewarding.”

CWO Slack’s most difficult tour was when he served in Somalia.

“I spent six months there, in the desert, under very harsh living conditions. We were under canvass in the heat, and ate hard rations for six months,” he said.

Before coming to Kingston, CWO Slack was the Armoured School Regimental Sergeant Major.

“That is the proudest moment in my career so far,” he said. “That was a real sense of accomplishment and honour, to be named and selected by the Army Council to that position, and to once again have the responsibility of 300 or so NCMs that are on staff, plus the countless students that go through there, to be able to mentor them and be a part of their careers was a great honour.”

As the College Chief, he has another opportunity to advise and guide the cadets as they begin their careers in the CF.

“It’s a unique experience for somebody at my level. I’ve had a posting to a unit as the RSM, which was also a great time, but this is like a second kick at the can. I’ll get to participate with the young cadets, and mentor them. I’ll also be a part of the strategic level side of things, like planning the future of the college, so I’m getting quite comfortable in this seat.”

CWO Slack took over from Chief Warrant Officer Marcel Chiasson on July 5, and even though it’s typically quiet in the summer at RMC, he has had a chance to settle into the role and get started on the challenges he’ll face in the coming months.

“There are massive amounts of construction happening. We have a major disruption in Sawyer and Girouard, and we also have renovations inside the quarters. It’ll be a challenge to keep everyone focused on what the end state is – almost a brand new building in Sawyer and McKenzie, and improved quarters. It will be particularly challenging when the frustration comes in because of lack of space and lack of facilities,” he said.

“The other focus is, of course, maintaining the balance between the four components. I understand fully the needs of the academics. I spent a year as an academic here last year, in class with the cadets. The workload that the students carry takes its toll. I know that’s a challenge to keep the balance, but at the end of the day it’s a military college. The cadets have to prioritize their time, and find a way to do it all in one day. It is possible, and people have done it for many years. It’s frustrating, and I do recall staying up for long hours of the night on my earlier courses, until we figured out how to do things in the right order, and how to do more than one task at once. Once you learn that, things just seem to slip into place.”

Not only experienced with the academic side of RMC, CWO Slack also understands the need for physical fitness, and hopes to maintain the high standard left by the outgoing College Chief.

“I’m a runner. In the past, I’ve done about 10 marathons, two of which were ultra-marathons, and countless races; I like to keep fit.”

While keeping with the Commandant’s aim, CWO Slack hopes to create a learning atmosphere for the cadets that is rewarding but challenging, and is in the spirit of the college and CF values.

“The challenge is to keep it all in perspective. We’ve got the youth of the cadets, and the goals we want to see at the end. Finally, we’ve got to produce fine leaders in the CF, but it’s my goal for the graduates to leave with a sense of accomplishment and pride in the institution,” he said.