A Night on a North Georgia Mountain Ridge

There are situations in organizations that do demand that, to get a job done, leaders must extract an extra ounce of their internal toughness to meet the situation.  The following vignette is such a situation, one that taxed one leader to the limit—but the leader met the challenge and prevailed.  The mission was accomplished.

The ranger patrol, a squad size unit, struggled up the steep slope to the higher ridgeline.  It was December in the Northeast Georgia Mountains.  Freezing rain and sleet had been pummeling the rangers since the gray light of day had faded into black darkness hours ago.  Ponchos kept at least the field jackets and field jacket liners somewhat dry, enough to retain some body heat. This with the effort to climb the ridge with the loads being carried, despite the freezing rain, sleet, and sinking evening temperatures, fended off the effects of the wet cold.  But night was upon the rangers and the wet promised to freeze as the night became even colder making movement on the already treacherous slopes even more so with the increased potential for injuries.

The squad was moving toward an objective rally point (ORP) that had been designated on a higher ridgeline.  The ORP was above a small mountain valley where an element from the squad would move from the ORP to rendezvous at a point in the valley with a “partisan” who would provide rations for the squad that had been on mission in the area for the better part of a week.  Its members had consumed all carried rations and been without food for a period of time.  Given the squad’s movement activity, the food provided by the partisan was critical to maintaining its ability to operate and complete its larger mission, a raid of a cross roads security installation followed by rendezvous with the three other squads of the parent platoon.

The climb to the higher ridge proved grueling taking a severe toll on many squad member’s previous injuries and the sick.  The squad leader was shaking off a bout of what seemed like flu.

By this point, the wind had greatly increased, driving the sleet and ice into freezing face stinging pellets.  The squad moved through the pitch blackness of the new night amazingly well given the conditions, a testament to previous training and conditioning.  Still, the treacherous wet and increasingly mud greased rock strewn and tree root laced slope underfoot as the squad followed the ridge’s contour was taking a toll.  The unrelenting obstacle course was causing rangers with past ankle and knee injuries to feel almost screaming pain as they attempted to make their way and occasionally lost footing.  Some fell into small ravines that radiated off the ridge top suddenly dropping three to five feet into the temporary open space before crashing on solid rock.

The topographic maps being used were adapted from high elevation photographs that had been taken of the ground with superimposed grid lines.  They were not always accurate and in the conditions could not be readily checked.  Checking location had become almost impossible with the pitch darkness and weather denying use of the compass to get readings and azimuths to surrounding features to check positioning and security restrictions on using any open lighting.  The squad leader was using almost a dead reckoning from last known point and measuring pace.  The difficulty added by intersecting ridges at certain points along the route was also problematic especially as the squad came closer to the ORP location as there were several of these ridge configuration along the route.

The squad leader eventually called a halt after what seemed endless toiling along the crest of the ridge.  Based on all indicators he had, the Patrol leader believed he was at the ORP site and a cursory check of the ground seemed to bear out his conclusion.  As the patrol squad established security and the patrol leader conducted a more extensive local reconnaissance as much as possible to further confirm location, he determined that the patrol had reached its designated ORP site.

The patrol went to a 50% security alert/sleep configuration, the patrol leader and radio operator positioning in a central location within the perimeter.  They established themselves in a declivity between two granite slabs.  The patrol leader had given a quick situation brief to the patrol before going on 50/50 stressing that at 0300 he would move down the slope with two other rangers to link with the partisans.

The patrol leader was running a fever and took the opportunity to attempt to sleep wedged into the cradle of rocks that would serve as a bed.  The radio operator decided to take the patrol leader’s watch and monitored the radio with what protection his poncho provided.  The field jacket and field jacket liner gave some protection against the increasing cold made worse by the dampness brought on by the climb to the ridge in the freezing rain and sleet.  The wind had picked up and the large granite slabs provided some protection.  Everything was blackness.

The radio operator felt a trickle of freezing water down his back.  He had dozed and the icy cold snapped him out of his doze…he checked his watch.  It was 0300. The patrol leader needed to pull his party together and move down the ridge to the rendezvous point with the partisans.

The radio operator moved to the patrol leader’s position and shook him awake.  He was in sad shape but pulled himself together and quickly moved off to gather the two rangers who would accompany him down the ridge.  There was still some doubt that the ORP was where it was supposed to be, so the movement down the ridge would have to do what could be done to confirm location or adjust route to ensure rendezvous with the partisans.

As BMNT (before morning nautical twilight) approached the patrol leader’s party had not returned.  Some concern was building with the radio operator.  Daylight was around the corner and the patrol needed to consume its food and with other information provided by the partisans continue its mission at sunrise.  Its objective as mentioned was to rendezvous with the other three patrol squads of the platoon to conduct a platoon strength raid on a target 30 kilometers distant.

As the morning sky grew lighter the patrol leader’s party finally returned with a live chicken and an assortment of raw vegetables and potatoes.  The cooling weather over the night had changed precipitation to wet then lighter snow.  The ground and trees were blanketed in several inches of the white snow.  The overcast had cleared and the sky was promising a cold sunny day ahead.  This weather would be  an improvement over the previous days and the preceding night and the terrain would be less challenging to move on.

Little time remained, as soon as each ranger had gotten his portion, the patrol moved.  The rangers ate as they moved.

As the sun rose higher in the sky, the day became a brilliant day of bright blue sky and white snow, beautiful in the cold frosty mountain air.  The patrol quickly got into its stride as it moved tactically down a wooded slope then along a wood line skirting a mountain pasture.  The patrol made good progress toward its rendezvous with the other three squads of the platoon.  The patrol leader had shaken his bout of fever and was able to continue.

The patrol squad did make its raid successfully on the crossroad security installation target followed by its rendezvous with the other three squads of the larger platoon raid patrol.  The platoon’s later raid was successfully conducted.

In this case, a leader was almost reduced to an inability to function by illness and in a hostile weather and terrain situation.  Somehow that leader reached deep inside and found the fortitude and will to continue.  As well, other forms of leadership emerged from patrol members of the patrol like the radio operator that buttressed the patrol leader.  As always, the forming of an effective team provided overlap and reinforcement when something unexpected occurred, in this case illness. 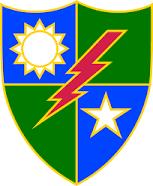