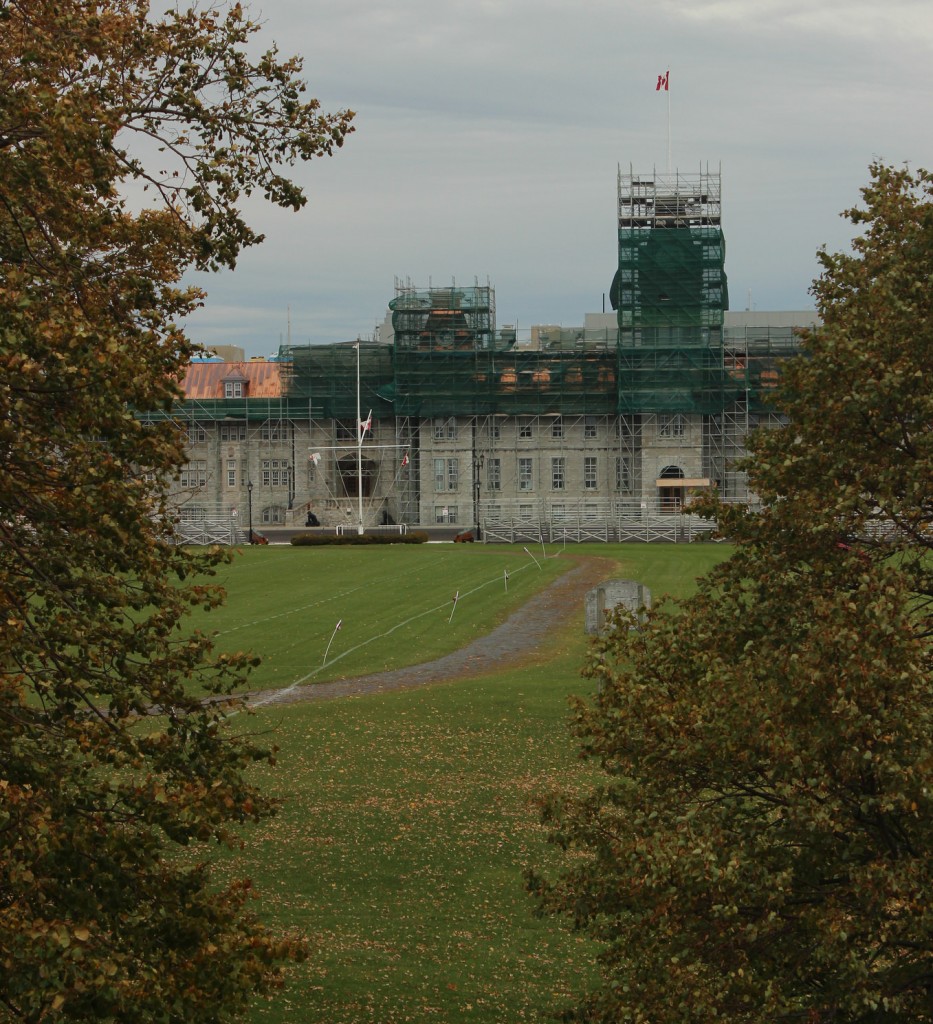 A personal gratitude to Ambassador Ken Taylor from RMCC grounds

The following article is a personal encounter by a prominent member of the Royal Military College of Canada family. This is the very first time this person has publicly related this story.

Readers will notice that the authorship is missing from the article and this is very deliberate. As eVeritas is published and can be searched on World Wide Web, the author wishes to remain under the radar of “The Undesirables” on this very sensitive story.

Ken Taylor, the Canadian Ambassador to Iran (1977-1980) died on 15 October at age 81. Ambassador Taylor and John Sheardown (1924-2013), head of immigration at the Canadian Embassy, warmly welcomed and masterfully sheltered six American diplomats in secrecy in their homes in the aftermath of the takeover of the American Embassy in Tehran on 4 November 1979. Long before the release of the 52 American Diplomats after 444 days of captivity, Ambassador Taylor now bearing the righteous title of Our Man in Tehran (Robert Wright, Harper Collins, 2010), critically and ingeniously catalyzed the role of the CIA for the daring escape of the six American house guests after 79 days, at great personal risk.

The stoic and indispensable Sheardown was especially chosen to head the immigration department Tehran’s office in the midst of the revolutionary mayhem of 1979. Nicknamed ‘Big Daddy’ by his American house guests, he calmly projected the true grit of his Royal Canadian Air Force Lancaster bomber pilot missions in WWII, living one of his nine lives in the chaotic daily scenery of Tehran under constant surveillance, as described by his wife Zena. 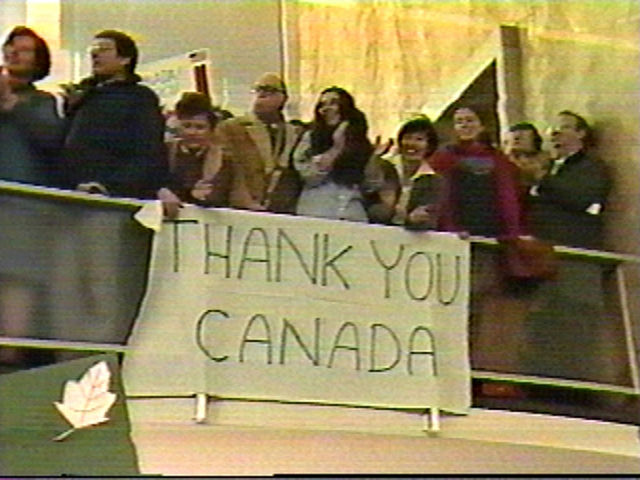 The clarity of purpose and decisiveness in support of Ambassador Taylor’s monumental efforts has become legendary in government circles in Ottawa. Former Prime Minister Joe Clark whose administration orchestrated and expedited the granting of Canadian passports to six Americans for their safe passage from Tehran, with leading support from the Secretary of State for External Affairs Flora MacDonald (MP, Kingston and the Islands), was quoted as saying that we (Canada) rose to the occasion and it showed us at our best, not simply because it worked but the motives were correct. The hostage crisis and its aftermath has been the subject of documentaries and books and dramatized on both sides of the border. The Escape from Iran: The Canadian Caper starring Gordon Pinsent in 1981 integrates the events more accurately. Argo, a by-product of Hollywood machinations and winner of three Oscars, has other ambitions. Ottawa and Sheardown never found a place in the movie script. Argo outraged people on both sides of the border, chiefly Ambassador Taylor, who had intimate knowledge of the tumultuous events. It falsified Canada and the role of Canadians as minimum wage movie extras in CIA heroics.

This underlying factual narrative also embodies a very personal connection to the aforementioned events worthy of an episode of The Twilight Zone. In its opening declaration in 1959 it foretells of a dimension that is the middle ground between light and shadow, between science and superstition, and it lies between the pit of man’s fears and the summit of his knowledge. On the Sunday morning of 4 November 1979, I stood outside the consular section of the American Embassy with nervous anticipation of the upcoming interview for a student visa, clutching in my hand the plethora of required documents and a letter of acceptance to the first year Physics in one of Pennsylvania’s prestigious universities.

I had already missed the September 1979 fall term due to the ever-growing line-ups for visas at the American Embassy. Only a few days earlier, on the way to my daily routine of early morning presence in the line-up, I had witnessed a large menacing mob a block away from the Embassy. The angry mob was much larger and had reached the perimeter of the Embassy on 4 November. The notion that embassies are scared ground, even in wartime, and another day of angry anti-American slogans will come and go was shattered before 11:00 hrs when word came to the consular section that the Embassy was under siege and the perimeter was breached. The knives are out and coming fast was the final clarion call, before I broke to a hasty retreat towards, ironically, Roosevelt Avenue.

The hostage crisis was a fait accompli and all American visas for Iranian citizens were frozen all over the world. The gravity of the matter slowly crystallized. Why did you put all your educational aspirations in the American basket, was the question that was posed to me by somebody very dear to me and brought with it renewed vigour. A week later, I had visited and gathered information on post-secondary education from the Swedish and Canadian missions. Swedes were welcoming once they examined my secondary schooling history and offered a hasty visa once the application was complete. Two years of Swedish language school was daunting. The visa process for Canada was very slow with no guarantees. Being a product of 12 years of bilingual education, the English Canadian universities beckoned forcefully.

On 16 January 1980, having successfully completed all the requirements in the previous 10 weeks, I reached the Canadian Embassy to see no line-ups and a large ominous sign on the gate declaring it ‘Closed Indefinitely.’ Confusion was tertiary among the symptoms of nausea and cold sweat on that chilly winter day in Tehran. Time had stopped and The Twilight Zone moment had dawned. From the shadows of fear of a failing second attempt to further my aspirations, came the light of a frantically waving female face behind a thick security glass wicket. “What is your business with us dear,” she queried. I explained that my passport and all my documents were inside waiting approval, with a resigned voice of doom. She disappeared for an eternity and upon her return simply uttered two words, “Good Luck.”

At the least, I had retrieved my passport with the most invaluable soon-to-be-expired exit permission from the Iranian Revolutionary Border Police. May be two years of Swedish language school was not such a bad idea after all!

It took a long block of walking before I ventured to open the passport for no apparent reason but to be blinded by the intense sight of an azure blue bilingual stamp with the Canadian Coat of Arms on page 21, completing the superstition dimension of a casino card game of 21. The overpowering giddiness paralyzed every sensibility of public transit and the 11-km journey home on foot presented another time dimension beyond ordinary.

An airline ticket was hastily arranged for the first available date of 31 January 1980.

Unbeknownst to the whole world but a few good Canadians and their American house guests, much grander events were to unfold.

On the 28 of January, Montreal La Presse broke the news to the whole world that Ambassador Taylor and the Canadian contingent along with their six American house guests had departed from Tehran safely. Recriminations from the gang of the revolutionaries soon ensued.

On Wednesday 30 January, one day before my departure, the grandstanding Iranian Foreign Minister solemnly pledged that Canada will pay sooner or later. There was no limit as to what the airport border police could do to a holder of a Canadian Visa.

The Canadian singer-songwriter Gordon Lightfoot lyrical masterpiece ‘Early Morning Rain’ sets the next scene on that fateful rainy day of 31 January 1980. Lightfoot’s depiction of hearing the mighty engines roar, as the big 707 (Boeing) was set to go is the start of a wondrous 36-year journey to my adopted home and native land.

Canada has forged my heart and soul and given me the purpose of service. I have witnessed first-hand the spirit of Ambassador Taylor and John Sheardown in the form of sobriety of thought, critical analysis and fiduciary duty in all corners of this strong land and especially among my RMCC family. I will forever cherish the biggest jackpot of a game of 21 in the form of Sheardown’s signature on my student visa on page 21. “What took you so long?” was the reaction of Sheardown when a hushed voice on the phone from one of the American diplomats who had evaded capture, sought assistance for the first time.

William Daugherty who had the misfortune to endure 444 days of captivity as a hostage was succinct in his reflections. “I don’t have many heroes,” he said. “‘Heroes’ is a way overused word. Dennis Rodman’s not a hero. Ken Taylor to me is.” Former US President Jimmy Carter has said “90 percent of the contributions to the ideas and the consummation of the plan were Canadian.” In his eulogy this past week, former Prime Minister Joe Clark clearly defined Ambassador Taylor as “a highly skilled professional diplomat who understood his duty and understood his craft and performed them with unusual sensitivity, care and intelligence.” Our motto of Truth, Duty, Valour was imprinted in his spirit.