Above: Colors of the 8th Infantry Division and the 1st Armored Division 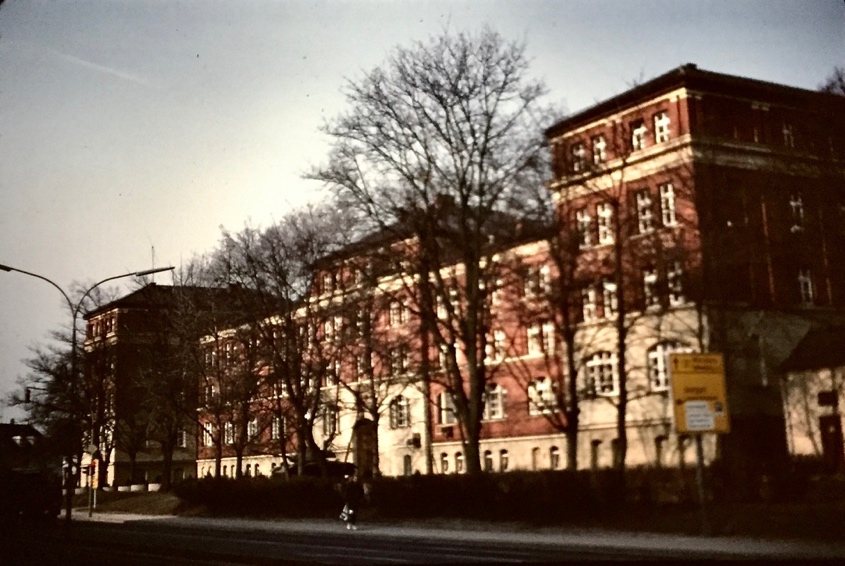 Once home to the 2nd Royal Bavarian Lancer Regiment the pictured barracks in Ansbach, Germany had been repurposed as a division headquarters. In 1984 the new G-3 Training Resources Office was installed in offices at the fourth palladium window from the building’s right corner, second level.

Determining to form a Division Assistant G-3 for Training Resources

In that sense some innovation may be very useful and productive and some may be either before its time or otherwise dysfunctional for any number of reasons.   Nevertheless, innovation generally brings advantage to perhaps ineffective or inefficient operations.  And all innovation, particularly the most effective, requires inspired and effective leadership at multiple levels.

Such is the story of an innovative development in a complex area of U.S. Army combat divisional training operations in the early to mid 1980s that made a vital difference to essential training resource management.  This innovation dovetailed with and paralleled a massive Army reorganization and modernization that proceeded for well over two decades.

The vignette that follows considers a set of key players and leaders in this massive project and the innovation applied at this critical time in Army developments.

It was 1983.  The major was a student officer in the last months of the Command and General Staff Officer’s Course at the U.S. Army Staff College at Ft. Leavenworth, Kansas.  In the classroom discussions in some of the classes and in the breaks in the hallways, comment would be made to some innovative work that had been done by then Major General Paul Gorman, when commander of the 8th Infantry Division in Germany from 1977-79. 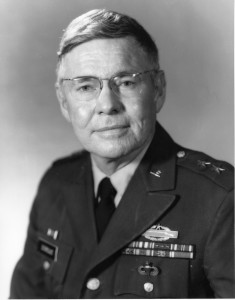 From the comments, the general had reorganized his division G-3 Plans, Operations and Training division staff section to include an office that orchestrated and managed all division training resources and accounts.  This focused approach to managing and applying the array of training resources available and employed by a deployed armored or mechanized division to obtain the greatest mission training value, was for the times innovative.  But it was also the correct initiative to take with the Army’s massive reorganization and modernization program in progress.

The Army’s post-Vietnam refocus to the plains of Central Europe and potential ground conflict with the Soviet Bloc’s armored forces warranted such innovation.   Leveraging training to achieve the highest levels of readiness would be critical if ground combat developed.  Essentially, General Gorman viewed his training resource establishment as a combat multiplier to achieve a level of individual and collective mission task to standard proficiency that would make his division unbeatable on the battlefield.

Interestingly, the current Commandant of the Staff College at the time, Brigadier General Crosbie Saint, was an acolyte of this thinking.  The major’s exposure to comment on this topic at several class and hallway discussions would prove prescient.  Little did the major suspect how significantly he would play a role in the extending of General Gorman’s innovative approach.

Before the major graduated, Brigadier General Saint had been reassigned to U.S. Army Europe and ultimately command of the 1st Armored Division headquartered then in Ansbach.  The major continued to concentrate on his course work to complete his studies and graduate. 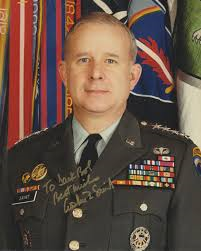 As the spring session initiated, the major began work to obtain a posting to a forward deployed battalion in Germany.  This was not an easy process and most calls to Germany were late at night or in the dark hours of morning, meaning little sleep before a class day.  The prospects for a direct posting from the college to a troop unit were slim to none.

Incredibly the effort landed the major a billet as a mechanized battalion executive officer on arrival in Country.  This was a pretty much unheard of situation as most majors would be initially serving on community, brigade or division staffs, even corps or army staffs before a highly sought after posting to battalion “with troops” assignment.  As well, the major would follow General Saint into the 1st Armored Division, the major’s second tour of duty with this formation, though 12 years and an ocean separated the tours.

The major soon graduated from the staff college and reported to the 1st Battalion (Mechanized), 46th Infantry in Erlangen, Germany, a maneuver battalion of the division’s 2nd Brigade, the only four maneuver battalion divisional brigade in Germany at the time.   He would enjoy an eventful and busy experience with the battalion to include commanding it for over two months.

At some 13 months into the battalion executive officer tour the major would learn that Major General Saint had determined that he would be ordered to division headquarters to continue the organization of a new staff element in the G-3.  General Saint was taking a page from General Gorman’s 8th Infantry Division book and organizing a 1st Armored Division Training Resources Office in the division’s G-3 Section (Plans, Operations and Training).

The timing of the new staff organization was “just in time.“  The explosion in tactical training resource developments that had been building since the major’s escort duty with General Gorman at Ft. Benning in 1975 had already initiated.  Training aids, devices, simulators and simulations (TADSS) had taken off exponentially and were becoming critical to large caliber gunnery. OPTEMPO (Operational Tempo) training accountants for aircraft and armored vehicle fuel, lubricants and spare parts, in the hundreds of millions of dollars, were, despite the NATO General Defense Position mission in Germany at the time and the aggressive force reorganization and modernization ongoing, coming under increasing budgetary pressure.  This pressure was developing from such initiatives as the Federal Graham-Rudman-Hollings Legislation that was reducing the defense budgets.

The annual capital projects budgets for training infrastructure improvements were daunting.  They involved upgrades to the dispersed brigade local small arms and machinegun ranges, integration of new interactive emergent virtual simulators such as the Unit Conduct of Fire Trainers (UCOFT) for the armored cavalry squadron and armored and mechanized battalions, nine trainers altogether in each brigade area, and railhead improvement projects.  These were some of the projects across the dispersed division training management area in the Northern Franconia area of Bavaria the division occupied.

This effort represented a massive and dynamic program of training support improvement with a tight schedule of execution.  The required coordination with local German planning commissions, the Army Corps of Engineers office in the division’s area, as well as subordinate division commands and the division headquarters was extensive and ongoing.

No longer could this area of division operations function as an afterthought to the plans, operations and traditional training offices…it was an office in its own right that was critical to the division’s being trained to standard and ready to execute its GDP mission.  The expertise to manage all of these resources and assure their ready availability to commanders to support formation training made development of a skilled and capable organization to plan, manage and execute programs essential.

General Gorman had early foreseen the need and acted to innovate with an organization to focus on training resources in the 8th Infantry Division, The success of this innovative initiatives was noted by General Saint who replicated it with some further enhancements in 1st Armored Division three years later.

The 1st Armored Division assigned 14 officer, non-commissioned officer and civilian staff to the new section.  The staff would make good on the investment and prove a vital management and project office for the division’s training resource base.   The 1st Armored Division’s training resources program within two years of the office’s creation added a 25%-30% effectiveness enhancement to division training capability through its operations, most notably in the successful standing up and integrating of the 10 UCOFTS assigned to the division and a battalion through division command and control simulator located at Katterbach near the division headquarters as well as a 50-75% enhancement to training capital projects budgets across the division to upgrade local training areas, weapons ranges and other critical training resources from available 7th Army funds.

Ultimately, much of this effort would strategically bear fruit on the ground in form of the performance of the division in the first Gulf War.  The visionary and innovative leadership of first General Gorman then General Saint would make a huge difference in training support and its contribution as a combat multiplier. Not just to the 1st Armored Division but all other major 7th Army formations that benefitted from the training support initiatives taken by these two officers.

Note: A parallel to this vignette is of interest.  The major in the vignette, in fact the author of the vignette,  first interfaced with then Brigadier General Gorman in 1975 when the major was detailed from his duties as the S-3 Air of the 1st Battalion (Mechanized), 58th Infantry to serve as the general’s escort for a series of briefings the general was providing to General William DuPuy, the first commander of the then new U.S. Army Training and Doctrine Command. at the U.S. Army Infantry Board, Ft. Benning, Georgia.

The briefings addressed, among other topics, the prototype system that would become the Multiple Integrated Laser Engagement System (MILES) that would soon be employed for the Developmental/Operational Test 2 for the Mechanized Infantry Combat Vehicle and later the National Training Center at Ft. Irwin, California.  (The author had been General DuPuy’s children’s babysitter when the general as a colonel commanded the 1st Battle Group, 30th Infantry in Schweinfurt. Germany in 1961-62.)

The author again interfaced with General Gorman, then retired, in about 2000 after a briefing he gave at the Downtown Club at River Front Towers, Richmond, Virginia to the Richmond West Point Alumni Association Chapter on Army developments.  He would again interface with the general in 2016 to decline a personal invitation to the general’s Cardinal Point Winery in Afton, Virginia arranged through the good offices of the author’s cousin, Major General (Retired) Lucien “Blackie” Bolduc, Jr.  Generals Bolduc and Gorman were USMA 1950 classmates.  (It is interesting from a Canadian perspective to note that General Bolduc and the author descend from soldier Louis Bolduc of the Carignan Salieres Regiment.)

The author, after the staff college and the 1st Armored Division, would again interface with General Saint in the Pentagon in 1991 at a final “buy in” briefing to the Army’s four star generals for the Combined Arms Training Strategy.  The author was the U.S. Army Training and Doctrine Command lead for the team assigned to develop the strategy.