Above: Arms of the United States Military Academy Classes of 1970 and 2020

The Pandemic of 2020 clearly impacted our planet.  It is affecting almost everything we do, not least being milestone life events like weddings and school graduations.  These events hold deep significance in our lives and collective sense of order and progress.  Graduations particularly, and most specifically, those from the service academies, take on an almost spiritual aspect.  They certainly are a life changing event for the newly commissioned officers and the new officer’s family.

The following comment reflects on the approach a veteran U. S. Military Academy class took with its half century affiliated class, the pandemic affected Class of 2020.  The comment also notes the often under-appreciated bonds of family through generations of academy classes, bonds that continue to mold leaders from schools dedicated to forming tomorrow’s leaders for the nation.

Because of my Quebecois roots and extended family the above comment further applies to family who have attended and graduated from the Royal Military College.

Being a graduate of one of the five U.S. service academies, I cannot fail but to reflect on the impact of the pandemic situation of 2020-21 on the graduation event for the West Point Class of 2020 and their families. The various service academy classes of 2020 are experiencing the most unique graduations than perhaps since World War II.

While I personally did have experience on a civilian university campus and two of my children graduated from a civilian university, and this is a major event for those graduates and families, there is nevertheless something unique and not easy to put into words about the national service academy graduations. In no small way the entire family celebrates. Significantly, those celebrations were significantly modified in May 2020. 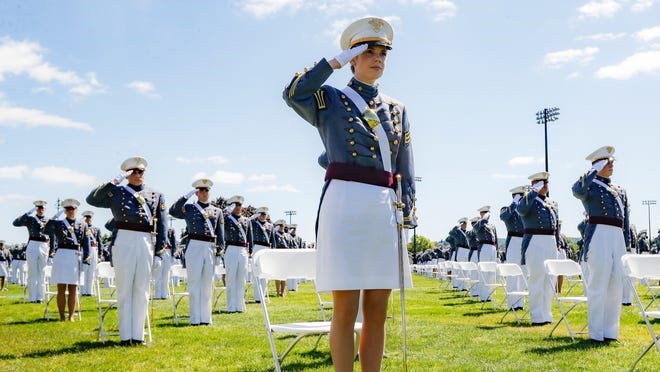 Different than most other college level graduates with some exceptions, like those of the National Guard and Army & Air Force Reserve Simultaneous Membership Programs, the academy graduate is already a member of their respective service whose status on graduation changes to that of a commissioned officer in that service with a minimum five year service obligation. That service obligation will occur before the graduate may decide to continue in the service or embark upon a civilian career.

In most cases the cadet’s/midshipman’s careers at the academies were ones shared in many ways by their families. In this respect, graduation has a unique shared quality as the new officer graduates and begins a service career that may take them to distant places and into harm’s way.

Because of the unprecedented and unique situation presented by the pandemic, the United States Military Academy Class of 1970 to its affiliated half century Class of 2020 chose to reach out.  In its way, the Class of 1970 wanted to let the new graduates know their graduation was a great achievement and appreciated. I and classmates from our academy Company A, 1st Battalion, 3rd Regiment, United States Corps of Cadets, hand wrote letters to each 2020 about to graduate cadet from Company A, 3rd Regiment.  All the other 1970 companies did the same.   A set of second lieutenant’s bars were included with each letter.

To lend more depth to the family network aspect of academy connections and graduation a further comment. I underscore what many may not fully appreciate in their own families regarding the extent of service academy connections and why the academies may relate more than we realize as families by sharing the following insight I obtained over the years.

I thought I was the first in my family to graduate from West Point. This was a feature of how we in the U.S. can tend to become separated from our family stories within a generation or two.

As I have determined since graduation, my extended family is very well represented at USMA since at least the 1830s on my grandfather’s Boucher side and my grandmother’s Gagné side. These families and related families arrived in New France in the early 17th Century which at the time included Northern Maine.

Many of my relations in this extended family have entered USMA such as the Héberts of Louisiana (my grandfather’s side originally settled in Port Royal, Acadia…now Nova Scotia and many were expelled by the British Government in 1755 making their way to Louisiana) and the Bolducs (my grandmother’s side). There are at least 300 or more USMA graduates who bear family names from this family group like my cadet company mate, Class of ’69, Ron Hébert and classmate R. E. Thibodeau.

I have learned that the academies are very much an extended family affair through generations even for families that have not been able to send a representative from the same direct family line. That does lend a perspective I originally did not have.

As well, on my wife’s family’s side cousins Walter Marcineac, Class of 1946, Jim Tanski, Class of 1968, brother Bill Tanski, U.S. Merchant Marine Academy 1966 and cousin Caroline Dayton Kearney, U.S. Coast Guard Academy Class of 2006, extend the service academy footprint as do my daughter and son-in-law as graduates of the Air Force Academy.

I suspect if we could lay claim to our family stories further back in time since the founding of the United States Military Academy in 1802, we likely all have such family footprints at the service academies. They are very much “our” service academies and they are truly in that sense a family affair.

In that vein, I do make a continued special extension of congratulations to the Class of 2020. You have earned it and I extend a family wish for God speed on your developing careers of service to our nation and as its future senior leaders.

Note: As a further aspect of the above theme, the extended Quebecois family networks I descend from are also well represented at the Royal Military College in form of current cadets and alumni.