Above: Arms of the U.S. Army’s Coast Artillery School 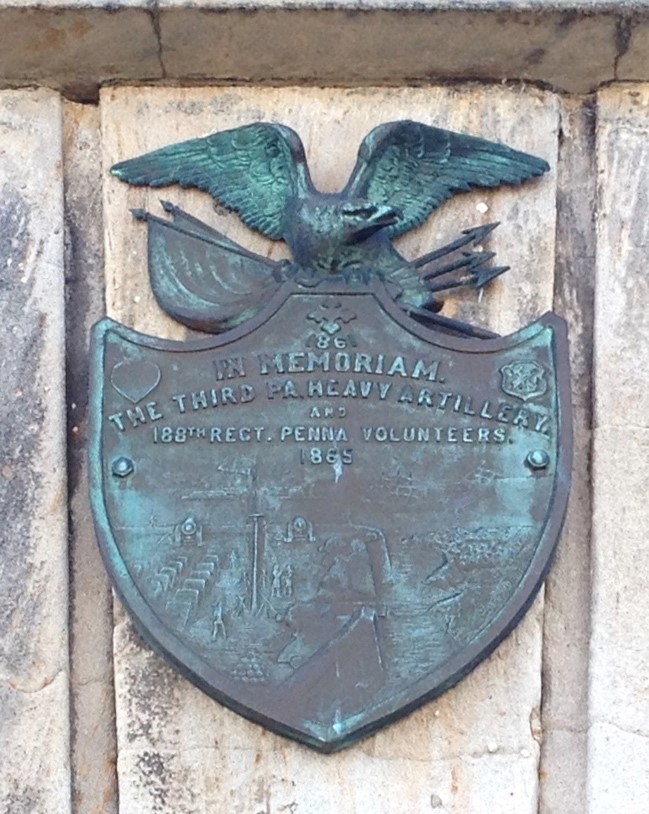 Plaque over the main sally port of the old fortress

In 2014 on a beautiful sunny Hampton Roads day I elected to take two of my granddaughters I was visiting in Suffolk, Virginia on a tour of Ft. Monroe, Virginia.  Their father was an Air Force medical officer then stationed at Portsmouth Naval Hospital and their mother was an ex-Air Force captain.  Both were graduates of the U.S. Air Force Academy.

The post had ceased serving as an active Army installation in 2011 with most post activity such as the U.S. Army Training and Doctrine Command (TRADOC) Headquarters moving a few miles west on Interstate 64 to Ft. Eustis sometime before the closing.  The fort was now transitioning to a National Monument. 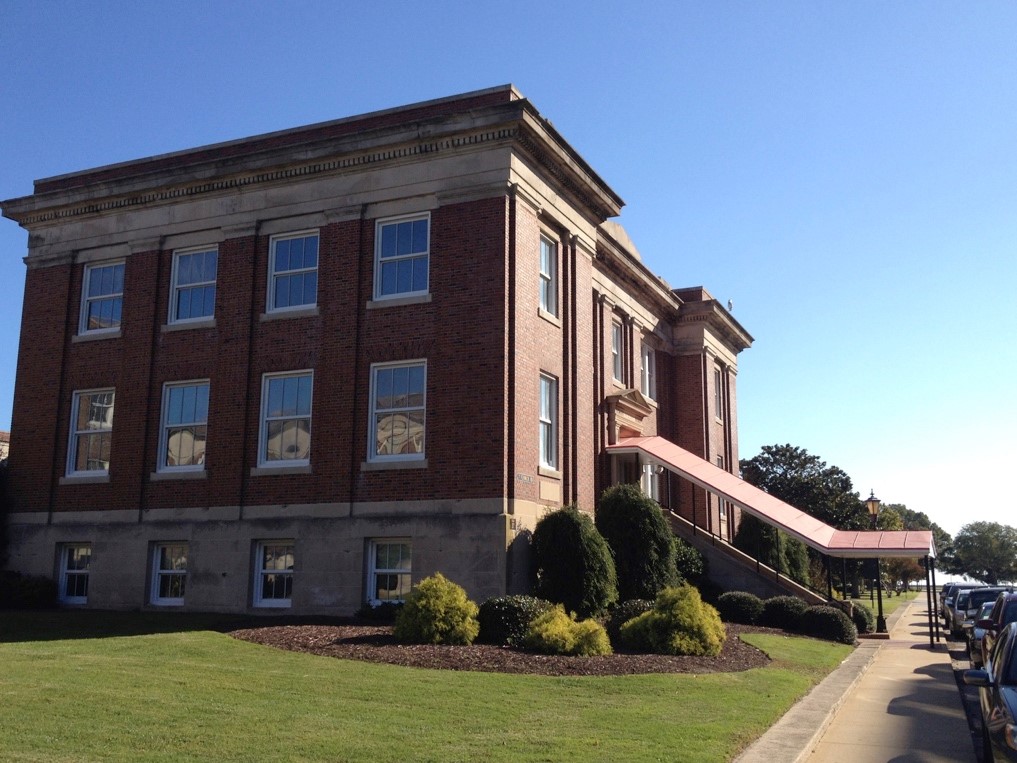 Once Home to the Army’s Artillery School then Coast Artillery School for many years, the latter a then cutting edge institution and branch when coastal artillery was at the front of technology and technological innovation.  With the obsolescence of cannon coast artillery, the branch ceased to exist shortly after World War II, its personnel combining into a consolidated branch that included field artillery and air defense artillery and the artillery school located at Ft. Sill, Oklahoma.  Air defense artillery would subsequently separate into a separate branch from field artillery and its school would eventually locate at Fort Bliss, Texas.

Ft. Monroe morphed.  It became the headquarters of the U. S. Army’s Training and Doctrine Command for some forty years.  It developed into an even more comprehensive leader of Army innovation. 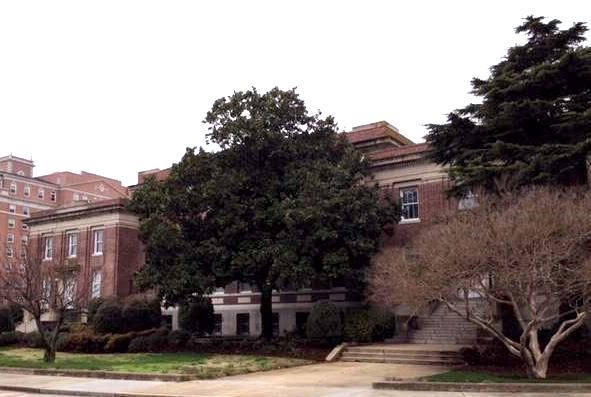 The Coast Artillery School Building as it appeared in 2014

The Coast Artillery garrison at Fortress Monroe, an active coast defense fortress at the time and command center for the Hampton Roads’ defense system, assembled for a dress parade in 1912 on the parade inside the old bastioned fortress.  A portion of the enlisted barracks appear in the far left background, a corner of a large three story barracks behind which was the sally port and bridge over the moat to the larger portion of the cantonment that included the red brick “campus “of the then Coast Artillery School with its view onto the Roads and the mouth of the James River estuary.   The central building partially visible through the trees is Quarters Number 1 where President Lincoln stayed in 1862.

In the 1970s TRADOC, a new senior Army headquarters purpose organized as a development organization, led and orchestrated an Army doctrinal and organizational revolution of a form that started in the mid-1970s.  Significant in this many pronged period of innovation and change was work done in the training developments area.

This training development work led to innovation in the simulation area applying the ever multiplying capabilities provided by burgeoning computer power and software applications, notably in simulation created virtual environments, fusing these with a similar advance in sensor capabilities and use of laser based systems.   TRADOC’s leadership in leveraging these emerging capabilities produced a training effectiveness revolution that demonstrated its result in the abilities and performance of the Army’s deployed forces in the first and second Iraq wars.   Ft. Monroe, both in its earlier Artillery and Coast Artillery School and TRADOC configurations, had a long history of leading Army innovation with technology. 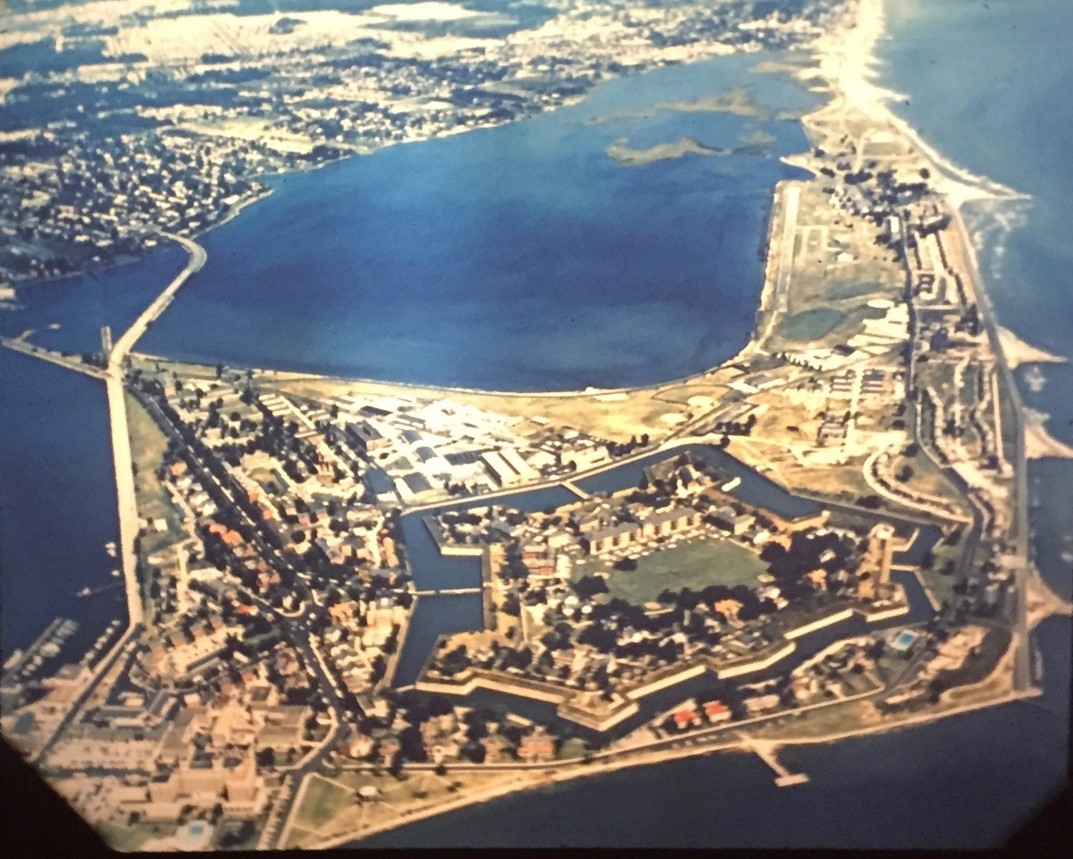 An aerial view of Fort Monroe in the 1990s, the Coast Artillery School and later  Headquarters, U. S. Army Training and Doctrine Command (TRADOC) occupied the buildings just above the large Chamberlain Hotel building (note aqua blue swimming pool) in the far lower left of the photo. The bastioned old fortress is clearly visible within the surrounding water filled moat.   The fort sits on what was an island now connected by fill toward the upper right to the opposite shore. It is essentially surrounded by water on all sides.

Noting again that my granddaughter’s father was at the time assigned to the naval hospital in Portsmouth they would not be in the area too much longer.  Their father would soon be completing his residency as a medical doctor at the hospital and the family would be moving to an operational assignment outside the area.

With the girls’ anticipated departure I was visiting on a weekend from North Carolina to spend some moments with them.   One inspiration with the girl’s time in the area getting short was to share Ft. Monroe with them as I remembered it when a busy headquarters and center of U.S. Army development and training.

The post hosted an organization that oversaw the operations of an internal Army empire of two integration centers, some 20 Army branch schools and centers, a number of basic and advanced training centers and elements of a global tactical training center system.   This of course was not necessarily something young girls would be fascinated by. The trick would be to somehow make it interesting to them.

The girls had been on the fort’s beautiful and historic grounds previously as their dad had taken them several times to enjoy the superb fishing pier and very nice beach on the Roads side of the fort in the vicinity of the old officer’s club building.  But they weren’t overly keen to visit the Casemate Museum and historic buildings of the fort.  I had to scramble to justify a visit.   One ploy was to entice them with a visit to the museum shop which tended to have neat stuff for kids as an enticement and the beach area as part of the visit.

I was somewhat successful and off we went on a wonderful adventure, but one that would prove poignant and nostalgic for me.  We would be visiting the post of my last assignment in the Army, an adventure that began as an Army dependent and continued as a soldier and had spanned 46 years, over 27 of those years on the Army’s rolls.  I had been on the post on temporary duty in 1979 and several times in the second half of the 1980s before being assigned to the post from Summer 1989 to December 1992.   I had always found the old fortress and its architecture appealing and in its way restful…even when challenged by a great deal of work, activity and travel.  And the site on Hampton Roads was truly spectacular.

As we visited the now quiet officer’s club on the beach, scene of many gatherings from luncheon’s hosted by directorates of the command and business and colleague lunches and my wife’s and my last Christmas Ball that we attended in the Army, she attired appropriately in a spectacular red dress and I in Army mess dress, the memories began.  As we visited the post’s quarters, Chapel of the Centurian, the parade, the barracks and Casemate Museum inside the old fortress, then the Chamberlain Hotel, the Training and Doctrine Command headquarters building, and my old office building where the Office of the Deputy Chief of Staff for Training was housed nearby…the memories came in a flood. 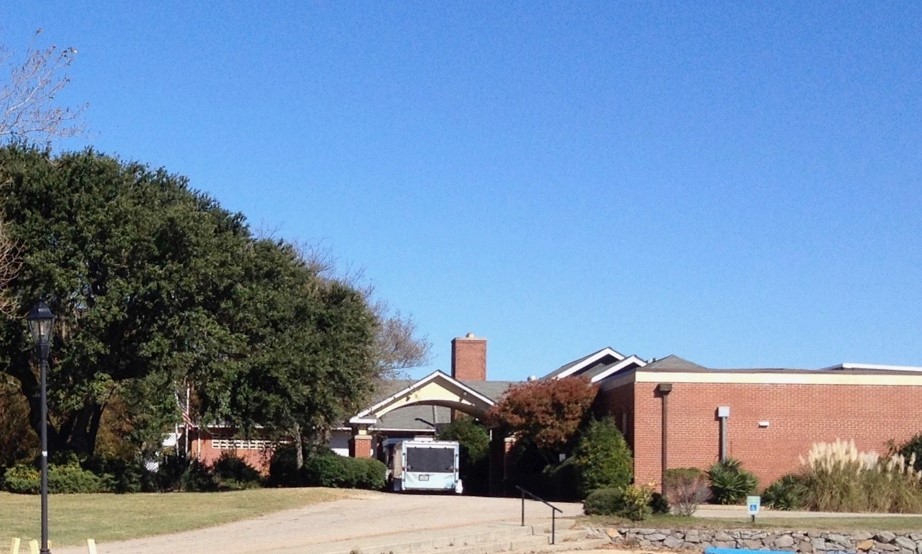 It was a 27-30 Officer, non-commissioned officer and civilian employee element of the Deputy Chief of Staff for Training’s organization at the time.  The directorate would lead the way in some strategically critical Army training development work not least being the Army lead for the development of what would become the Army’s Combined Arms Training Strategy (CATS).

I would conclude my 27 and a half years on the Army’s rolls as the Director of the Collective Training Directorate.  My last day of duty would be in the building pictured below in late November 1992. 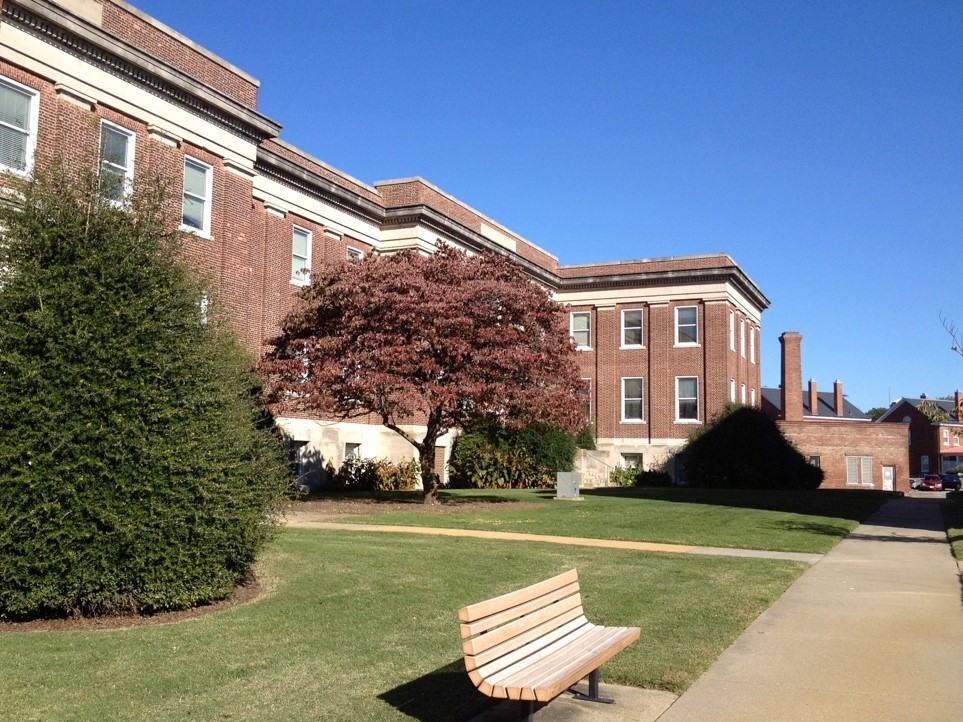 The Office of the Deputy Chief of Staff for Training occupied this building (the TRADOC Headquarters building was a short distance to the right).  My office in my last position as Director of the Collective Training Directorate was at the third floor window to the left of the crown of the purple tree in the center of the photo.

As with the closing of Ft. Monroe the passage of time has a dynamic effect of its own.  The Collective Training Directorate some ten years later would be relocated to the Combined Arms Center (CAC) at Ft. Leavenworth, Kansas, one of the two earlier mentioned lieutenant general commanded integration centers that reported to the commander of TRADOC, a full general.  The maneuver schools, the commandants were major generals, reported to the CAC commander at Ft. Leavenworth, Kansas and the combat support and service support schools, commanded by major and brigadier generals, reported to the Combined Arms Support Command commander at Fort Lee, Virginia, the second of the two integration centers reporting to the TRADOC commander.

The Director of CTD was normally a colonel and the directorate oversaw such major TRADOC Programs as the TRADOC aspects of the National Training Centers at Forts Irwin, Leavenworth and Polk and Hohenfels Germany, the Army field Training Manual Programs, the Inter Army Staff Talks Program and several other collective training programmatic initiatives.  As noted previously, one significant in the latter category that I had direct responsibility for was the then Army Chief of Staff’s initiative to develop a strategy and methodology/system for unit training that would optimize training resource use against mission essential training in an anticipated more austere training resource future environment. 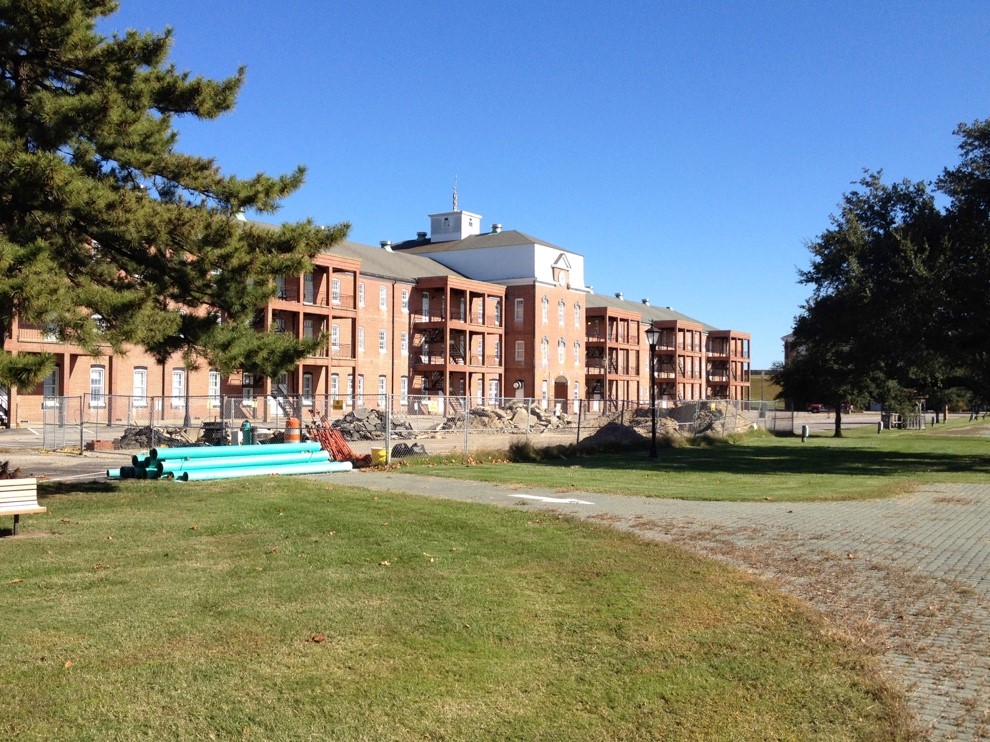 Work on this latter initiative in a major Army team effort produced a training strategy that would serve the Army of the next 20 years and in forms continues in service to this day.  In my 3 ½ year career with the directorate I would serve as its acting director for a month after the first director was reassigned to armored brigade command with the 2nd Armored Division prior to the first Gulf War and then, as noted earlier, the director for my last months on active duty with the Army before accepting a position with the Commonwealth of Virginia.

As I and my granddaughters retraced steps I’d made on the historic post 20 years before making sure to do some things that little girls would like to do like walking the beach, the old fort’s parapets for the views of the Roads, and definitely the Museum Store, which did have more than a few items that interested the girls, particularly the craft items…the tour proved a successful one for all.   The girls in their way had enjoyed the mid-19th Century handiwork of another leader of note, Corps of Engineers officer Robert E. Lee who superintended the early construction of the fortress. 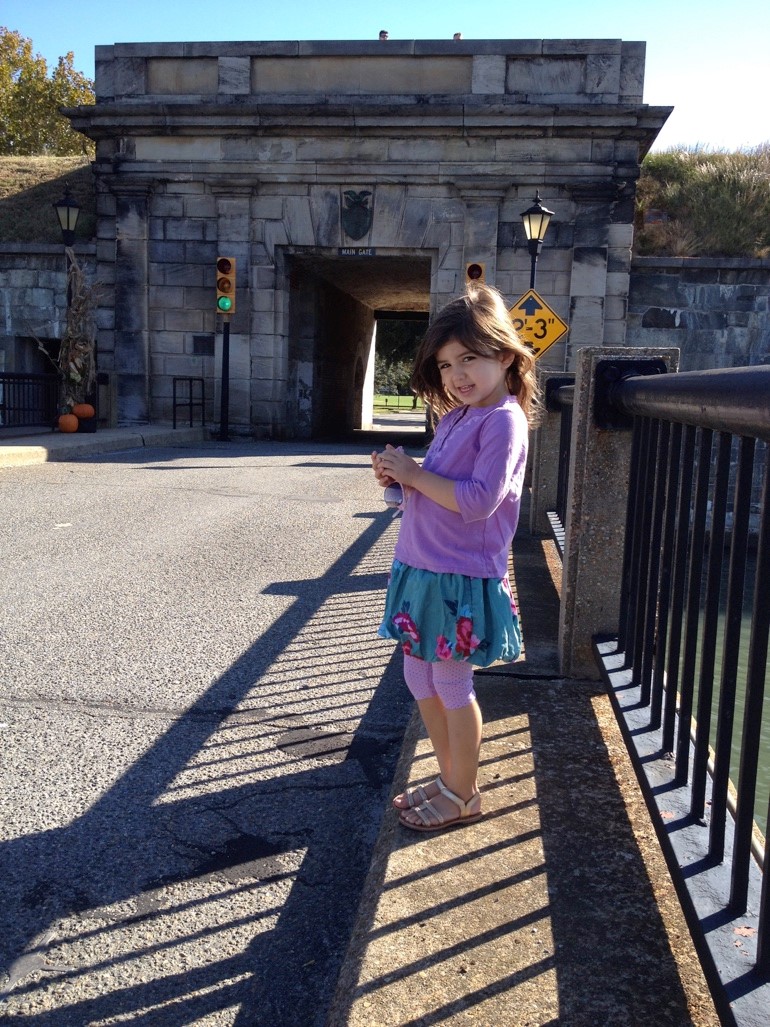 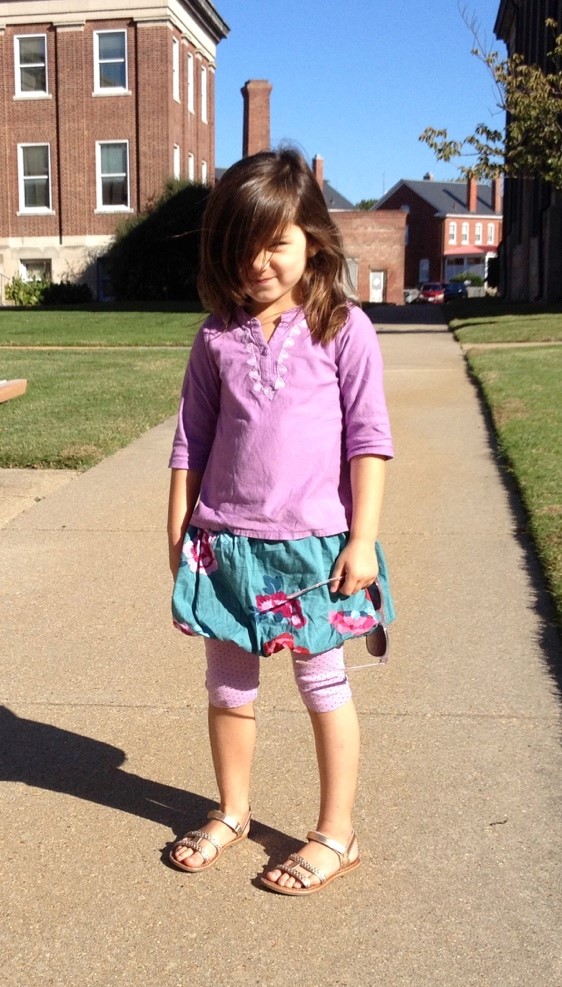 Noella at the former Deputy Chief of Staff for Training Building

In my case, in my mind, I reprised the great work of some very capable leaders whose leadership at Fort Monroe made a huge difference to the Army.   I recalled the role played by the installation as an innovative leader in Army development in the days of the Coast Artillery School and later as TRADOC.

The initiatives by the latter organization that resulted in the organization, doctrine and equipment of the maneuver Army of the 1980s-90s and the training resource and systems establishment that supported that maneuver Army had had telling effect when unleashed in the two Iraq wars.  Leaders such as William E. DuPuy, Donn A. Starry, and Paul F. Gorman during their tours with TRADOC were emblematic of the quality and effect of developmental leadership experienced by TRADOC and its staff.  These leaders had the remarkable ability to comprehend the vision necessary to move the force to its new more capable embodiment and the systems necessary to get it there and sustain its operations.

In the author’s experience such leadership is some of the most difficult to perform well and those that are good at it are rare in the leadership stable of most armies.  These officers had that ability to lead in this difficult development environment, leadership that produced remarkable successes.  Many of them I was fortunate to have known and study under.  I did apply the lessons learned for many years to come in other roles in and outside of the Army. 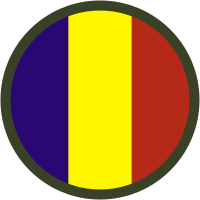