A group of  12-13 year old boys were traversing a fallow hay field across the street from the fairly new suburban housing development that had been building over the last five years.  The area in this part of Manchester, Connecticut was once home to dairy and truck farms that were gradually giving way to suburban sprawl spreading east from the metropolitan areas of Hartford and East Hartford, Connecticut.

Two of the boys had initially moved into the area when their father, an Army major who had just completed an assignment at the U.S. Army Armor Center at Fort Knox, Kentucky, purchased a just built house in one of the earliest developments of the several that were being built.  He purchased the residence before deploying to Vietnam on an unaccompanied yearlong tour in 1956.

On his return and then after attending the U.S. Army Infantry School for several months and reassignment to 1st U.S. Army at Ft. Devens, Massachusetts, the family had relocated to Navy Quarters belonging to the Hingham Naval Ammunition Depot on Boston’s South Shore.  The major was for duty with the Massachusetts Army National Guard as a senior Army advisor to several National Guard infantry battalions in the Boston Area.

He had rented his Manchester house to the battalion commander of the 2nd Battalion, 55th Air Defense Artillery then part of the air defenses protecting the significant strategic aviation industry assets in the greater Hartford Area.  The battalion was the garrison of a number of battery sites that included the battalion headquarters, multiple firing battery headquarters, fire control installations, missile firing sites, weapons (missile and warhead) storage sites, supply rooms and messhalls for the batteries, small arms ranges and military vehicles maintenance facilities and quarters for officer’s and non-commissioned officer’s families.

At a point late in the major’s 1st Army assignment and after the air defense battalion commander had relocated and a second renter bought a home down the street, the major decided to move his family back into the Manchester house.  It was now a few months later in the late fall of 1960.

One of the boys lived in one of the old farmhouses in the area.  The family still had several farm animals one being a mule.  The boys were walking the mule across the hay field to the grade school campus and its grounds on the other side of the 20 acre field.  As mules go he wasn’t a large specimen…medium pony size. 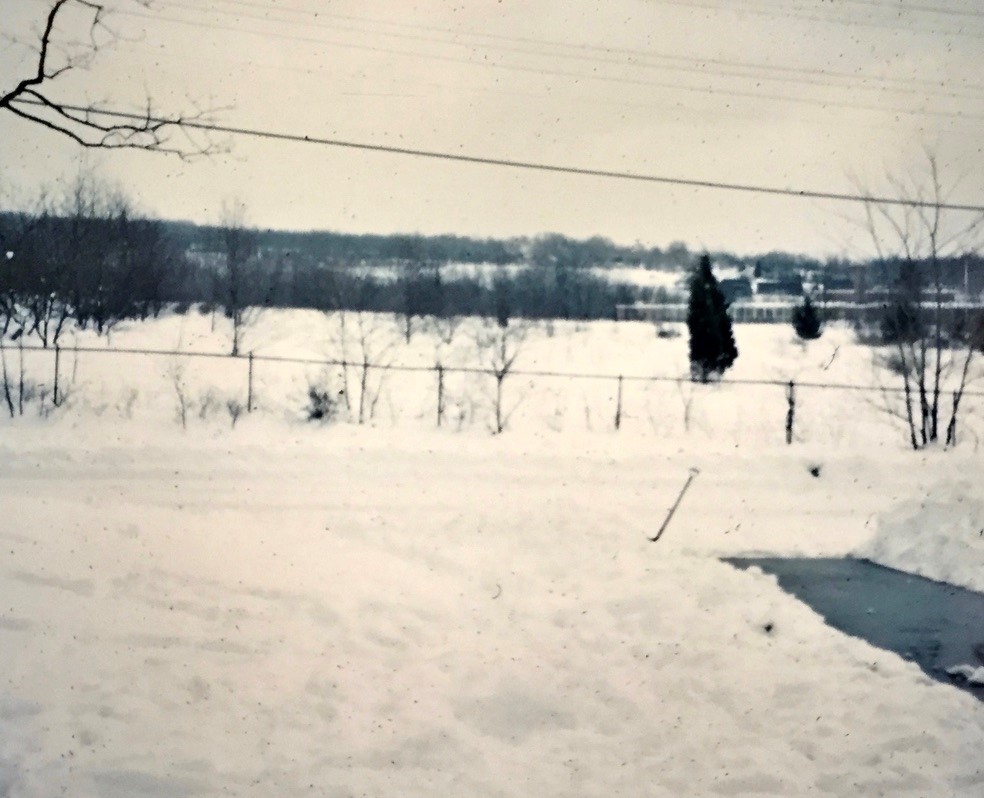 The rolling farm country and hayfield across Hackmatack Street with Keeney Street School visible in the distance on the right.  The headquarters of the 2nd Battalion, 55th Air Defense Artillery was located on the far ridge.  (Photo by then Major Robert W. Rozman.)

The mule was docile enough though the boy whose family owned it cautioned that he could be testy.  But of course…for boys used to recreating outside athletically and for amusement, “testy” didn’t register and the prospect of riding a mule had an almost unerring and irresistible draw to boys used to outdoor adventure.  So, about a third of the way across the field, the challenge to ride the mule was made and one of the boys accepted the challenge.

So it happened that one of the 13 year old boys took up the challenge to mount and ride the pony size mule.  The boy whose family owned the mule soothed and reassured the animal that all was okay as the other boys assisted the boy mounting him.  All went well enough and the boy was easily seated on the mule’s back and took the reins.

Unnoticed in the business of mounting the mule, his ears had gone down and flat on his neck.  As if his body had turned into a bouncing spring the mule sprang forward into a series of violent bucks.  The boy managed the first few but one final buck particularly well managed by the clearly unhappy and uncooperative animal sent the boy sailing belly down over the mule’s hind quarters.  If one was paying attention to the now violent movement and braying beast…his hind legs were perfectly cocked at this point to deliver a statement of his bad mood that would not be soon forgotten.

As the boy sailed over the animal’s back…both rear cocked hooves fired up and back perfectly aimed at the boy’s groin delivering a blow with such force that the boy’s trajectory was instantly modified upward at speed, then gravity pulling the rug out at about 15 or so feet in the air, the erstwhile mule rider hitting the ground hard on his belly.  Fortunately the thick straw on the field had some cushioning effect.

The boy was stunned on the ground for some seconds, the other boys rushing over to see if he’d been injured.  He was definitely feeling the mule’s forcefully expressed unhappiness…and had to take a little time to sort through whether he had suffered an injury that would need more attention.  The groin proximity of the blow had its effect.  He decided he could shake it off and the boys subsequently went on with their walk across the field.  But no one attempted to ride the mule again that afternoon.  The mule had made his mood clear.

The boy never forgot the leadership lesson delivered by the mule that day.   He learned that mules come in many forms and a wise leader takes the time to learn each mule’s “mood” and where that mood is coming from before attempting to mount up. As much as possible, to enjoy a successful ride, the leader had to be able to read the temper of the mule.

Over a long leadership career, the boy would apply the lesson taught by the mule countless times to good effect.   On occasion when circumstances didn’t allow the time and space to learn the mule’s mood and he had to be ridden bad mood or not, results were typically affected, but at least the risk being accepted was known and the blow to the groin and rough landing could be mitigated.

Over a long leadership career, the boy offered more than one thank you to his early leadership teacher the mule.  Ironically, the mule would again reappear in person as the mascot of the formal leadership school the boy would attend years later…the United States Military Academy.