Aeronautical Engineering Class of 2011: Raising the Bar in Aerospace Design

Monday March 28th marked the culmination of two semester’s worth of deadlines, presentations, and reports for the Aeronautical Engineering Capstone Design Project for the Class of 2011. After a luncheon at the Senior Staff Mess with special visitors from the Airforce, Industry, Academia and research communities, the group shifted to the technical presentation portion in Sawyer Theatre, where the Dean of Engineering, Dr. Philip J. Bates, Senior Officers and Public Servants from the Department of National Defence, members of the RMC Military Wing, academics, students, and friends, were given the opportunity to see what had been accomplished.

The undergraduate thesis in the Aeronautical Engineering degree differs from other degrees offered at RMC; instead of working in small groups of 2-3, this class compiled their work together and created a single outcome. The Request for Proposal this year had the Aeronautical Engineering Class of 2011 develop a light supersonic multirole fighter aircraft. With the support of their thesis advisors, the class completed both the conceptual design and preliminary design phases for their project. As a result, the “New 18” design team created the AERO LAAT-11 (Light Attack, Advanced Trainer), marking the completion of their Baccalaureate Engineering degree at RMC. Congratulations everyone! 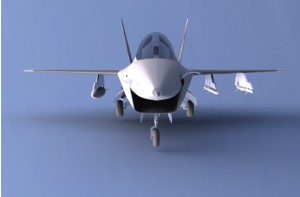 The Professional Engineers of Ontario (PEO) Student Papers Competition gives a chance for fourth year engineering students to showcase their capstone projects. A capstone project is a design thesis in which four years of hard work in specific fields of engineering are summarized. In the Kingston chapter of the competition, students from Queen’s University and the Royal Military College submitted abstracts to the judges for a chance to attain one of six spots in the final competition. This year the six spots were evenly split between RMC and Queen’s students. Each team was required to present their project within a twelve-minute time limit followed by a three-minute question period afterwards.

The winners of the competition this year were OCdt Muhammad Abdullah and OCdt Bernard Csabai, along with another RMC team taking third place. The winning project, titled “Aircraft Stealth Design and Configuration Managemen”t, had immediately caught the attention of everyone in the room when first presented and only continued to gain approval throughout the competition. The presenting team acted on behalf of the 18 members of the 4th Year RMC Aeronautical Engineering Design team, revealing the AERO LAAT-11 design project to those assembled.

The presentation featured numerical simulation ,which required the use and synchronization of four different types of commercial software tools. Two prototypes aircraft models were built using RMC Department of Mechanical and Aerospace Engineering’s rapid-prototype 3D Printer.  These were coated in aluminium, and tested in the anechoic chamber at RMC with the assistance of a graduate student from the Department of Electrical and Computer Engineering. The configuration management portion of the presentation displayed images of the Computer Aided Design of the aircraft. These pictures were screenshots of the SolidWorks© model and various rendered images of the aircraft. Finally, the management system that was used to assemble and manage the aircraft’s systems was presented as the finishing touch.

The presentation received only positive feedback from the committee of PEO judges. It is a great achievement to have RMC students showcase their design projects in a high profile design competition such as the PEO. Having RMC teams win first and third place at an event such as the POE Student Papers Competition underscores the high quality of education and professionalism that young officers are developing at the Royal Military College.