In case you missed it last week, we ran the following article as an April 1 Update to eVeritas: 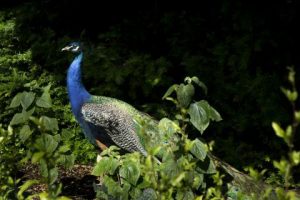 Ex-Cadets and current Cadets alike can attest to the sheer number of birds which make their home on RMC’s peninsula throughout the year. As eVeritas has just learned this morning from a source within DND, that population won’t be going anywhere anytime soon.

“Geographically speaking, RMC sits on the migration route for a number of important bird species,” the source (who spoke on condition of anonymity) explained. “For that reason, the Canadian Wildlife Service has requested, and DND has just approved, the designation of Point Frederick as a bird sanctuary.”

The new designation will be in place effective May 1. With grad week just around the corner, we were curious as to what this will mean for activities on the College grounds. “Full details will be available by the end of the week,” our source said. “What I can tell you is to expect Canadian Wildlife Service staff on the grounds to monitor the bird populations and enforce restrictions with regards to noise levels, etc.”

Our source also explained that, as a nod to the history of the Canadian Military Colleges, Royal Roads University has agreed to provide a shipment of peacocks which will add to the diversity of the bird population and, it is hoped, provide an additional attraction for tourists. The peacocks are expected to arrive by mid-summer.

We will provide more information as it becomes available.

And, proving once more that eVeritas readers have quite the sense of humour, we received a number of responses. The best are reprinted below. (Names have been withheld to protect the innocent.)

“Sounds like an awesome April Fool’s joke to me!!!”

“The bird sanctuary is a great idea.  I can just imagine de-commissioning the parade square due to Canada goose poo and eliminating the College Band due to the new noise restrictions!  But importing the peacocks could pose a problem – as an ex-Roadent, I recall their squawking and shrieking being louder than any marching band, and certainly way over the limits the other birds could tolerate!”

“And I’m sure we can count on some of the Peacocks and Parrots that parade around NDHQ will be found a use for, as part of the Sanctuary??”

“Glad to hear that Point Federick will become a bird sanctuary – there’s been great loss of bird life at RMC for many years.  Back in 1968 at my graduation the cadet wing got 5 Rock Doves and 17 (not enough) Starlings when we fired the ‘feu de joie’ during our graduation parade.”

“The only “Birds” I recall were “Jailbirds” AKA Defaulters! But perhaps too many April The Firsts have passed. No Fool like an Old Fool!”

“Further to the story on the designation of Point Frederick as a bird sanctuary, I just heard that collège militarize royal is sending some French hens to add to the diversity.”

“And Toronto will win the Stanley Cup this year…”

17481 Dr. Sean Maloney & The 20th Anniversary of Operations in Kosovo