How did British authorities manage to secure the commitment of large dominion and Indian armies that could plan, fight, shoot, communicate, and sustain themselves, in concert with the British Army and with each other, during the era of the two world wars? What did the British want from the dominion and Indian armies and how did they go about trying to get it? Douglas E Delaney seeks to answer these questions to understand whether the imperial arm.

Who is this writer,  Dr. Doug Delaney 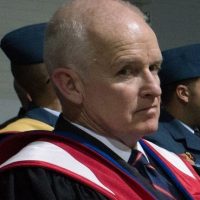 My favourite Dr. Doug Delaney story goes back some 13 or 14 years ago.

At the time, I had two great OCdts helping me doing various tasks, in and around Panet House, in support of the RMC Club.  To protect the guilty, I will refer to them as Craig who was a IV Year; and Tyler who was a III Year.

It was a late Thursday afternoon.

A college wide announcement had been made earlier in the day that Colonel Chris Hadfield, would be visiting RMC the following day and there was a Town Hall type gathering which would be held at the Kingston Military Community Sports Centre scheduled time 1600 hrs.

Cadets had the option to attend The Town Hall or go to their regular class.

Excitedly, Tyler asked Craig,  “Are you going to go see / listen to Col. Hadfield tomorrow at the Town Hall?”

Craig looked at Tyler with a bit of a frown and a disbelief look. He answered in a word, “No.”

Tyler somewhat perplexed asked, “Why not?” Without hesitation, the IV year confident officer cadet answered, “I have Dr. Delaney last period on Fridays, no way I would miss his class.”

A retired infantry officer with more than twenty-seven years of service in the Canadian Armed Forces, Doug Delaney’s military career began when he entered Royal Roads Military College at Victoria, British Columbia in 1983.

Four years later, he graduated from the Royal Military College of Canada (RMC) at Kingston Ontario with BA (Honours) in History.

Commissioned into Princess Patricia’s Canadian Light Infantry (PPCLI) as a second-lieutenant, he served for four years with the Third Battalion of his regiment at Victoria, B.C, where he held appointments as rifle platoon commander, intelligence officer and company second-in-command.

In 1991, Captain Delaney was posted to the Canadian Airborne Regiment at Petawawa, Ontario, where served as a rifle platoon commander in 2 Airborne Commando and as a reconnaissance platoon commander.  From 1993 to 1996, he was a staff officer (plans) at 1st Canadian Division Headquarters.

In 1996, he returned to regimental duty with 1 PPCLI, where he held the posts of adjutant and company commander.

In 2000, after finally completing his MA in War Studies through part-time study at RMC, then-Major Delaney returned to his alma mater to pursue a doctorate in War Studies, which he completed in 2003.

Since 2002, he has been a professor of history at RMC, where he lectures on the military history of Canada and the British Commonwealth, strategic studies, and the two world wars.

His first book, The Soldiers’ General: Bert Hoffmeister at War (UBC Press, 2005), won the 2007 C.P Stacey Prize for the best book on a Canadian military history topic and his second monograph, Corps Commanders: Five British and Canadian Generals at War, 1939-1945 (UBC Press), was published in 2011.

Some of his other publications include Turning Point 1917: The British Empire at War (UBC Press, 2017) with Nikolas Gardner; Capturing Hill 70: Canada’s Forgotten Battle of the First World War (UBC Press, 2016) with Serge Durflinger; “Army Apostles: Imperial Officers on Loan and the Standardization of the Canadian, Australian and New Zealand Armies, 1904-1914”, War in History (2016); and “Mentoring the Canadian Corps: Imperial Officers and the Canadian Expeditionary Force, 1914-1918,” Journal of Military History (2013).

His most recent work is The Imperial Army Project: Britain and the Land Forces of the Dominions and India, 1902-1945 (Oxford University Press, 2017).