BGen Sébastien Bouchard, Commandant RMC, on Leadership, the SSAV and the State of the College 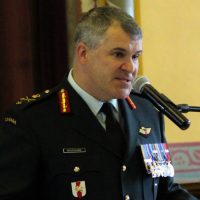 To say that BGen Bouchard, who became the Commandant of RMC late in the summer of 2017, is present in the day-to-day lives of his subordinates is an understatement. He and his wife can often be seen wandering around the dormitories, at sports events, or having their meals in the Cadet Dining Hall.

For example, my first real interaction with the Commandant occurred on Halloween night when he – dressed as the Paladin mascot – knocked on the door of my room in Fort Haldimand, gave me a handful of candy, and left without saying a word (as mascots cannot speak).

His approach toward command is not unique to RMC, and he has been just as involved and enthusiastic about interacting with his troops at all of his previous units. From his first posting as a RCEME troop leader after graduating from RMC to his time commanding a unit in Afghanistan, he has always placed the needs of his soldiers first and has strived to learn from others to improve his own leadership style.

“Leadership, commanding troops, is clearly a journey,” he said about his approach to command, “a journey that every day, every single little experience brings something more, so I’m a product of all my previous positions and the relationships that I’ve had with my officers, and NCOs, and civilian staff.”

Although some cadets may be afraid of being caught off guard, the Commandant assured me that when he is “walking around the College, it’s not to enforce rules; there’s a lot of people in the Training Wing who are paid to do this, so it has nothing to do with that.”

Instead, he hopes to build trust among cadets by taking the time to explain his perspectives and by listening to theirs. While he may not necessarily agree with everything that he hears, he makes sure to take notes and to always follow up on what he hears.

“Every time someone tells me something, I make sure to take action on it,” he said. “Even if it’s just having a discussion with the Director of Cadets or the Principal, I make sure that I’m doing something.”

It’s no secret that the past few years have been turbulent for RMC. With the challenges of adapting to a new generation, balancing tradition with progress, and remaining committed to producing Canada’s finest leaders, the institution has had to hit refresh over the past few months.

Before BGen Bouchard even knew that he would be taking over Command of RMC, major changes were already imminent. In October 2016, the Chief of the Defence Staff, Gen Vance, ordered a Special Staff Assistance Visit to assess the overall climate at RMC and subsequently publish a report on the challenges facing the College in order to make recommendations to improve the overall quality of the RMC experience.

After several weeks of interviews with hundreds of cadets, staff, and faculty, followed by months of writing and edits, the SSAV report was released in April 2017. Based on the input from the interviewees, the report made 90 long and short term recommendations, with some being implemented immediately by the CDS himself.

While some recommendations, like implementing kye (evening snacks like granola bars, fruit, crackers and juice) were easy to initiate, others would take more time, deliberate planning, and careful oversight. The execution of this monumental task was entrusted to (then) Colonel Bouchard.

This past Fall semester has certainly been different than any other one in recent memory. From day one, dozens of changes were implemented with more coming down the pipeline seemingly every hour. Of course, frustration ensued among the Cadet Wing as the routine that many of us upper years had grown accustomed to was suddenly, and fundamentally, disrupted.

The growing pains of the first semester, however, were a necessary evil in achieving the Commandant’s end state. Instead of looking to implement a Band-Aid solution, BGen Bouchard is planning to fundamentally change the College’s culture for the better.

For fundamental change to succeed, RMC needs a leader like BGen Bouchard. His commitment to knowing his subordinates personally, understanding their concerns and then acting to solve them make him a dangerous leader for anyone willing to accept the status quo.

Cultural change, while certainly a challenging and unending process, is long overdue at RMC. An Auditor General report published in November 2017 determined “that the expectation that third- and fourth-year Officer Cadets would consistently demonstrate proper conduct, enforce military discipline, and instill Canadian military values in first- and second-year Officer Cadets was not well founded.”

Furthermore, the Report presented disturbing findings, including that “some Officer Cadets in leadership positions abused their authority by selectively enforcing rules” and that their reckless behaviour often led to injuries. Additionally, it noted that “Officer Cadets were cynical about RMC rules and practices” resulting in a culture of “chronic rule-breaking.”

In the face of these tremendous and fundamental challenges, the Commandant has thus far been unwavering in his commitment to the institution and the wellbeing of its people. He has been unafraid to implement dramatic changes in pursuit of his end state: a fundamental cultural shift to enable 141 year old institution to continue produce outstanding graduates.

“There are a lot of things that I’m changing now, that 25 years ago did not make sense to me as a an officer-cadet,” he said.

“If it’s just an internal culture thing that does not support any of the four pillars, or does not reflect anything that you will do for the rest of your career in the Canadian Forces,” like first years having to wear uniforms into Kingston, a decades old policy which he overturned, “then I’m asking people to challenge those things.”

For the Commandant, rectifying RMC’s culture is contingent on building a culture around ethical leadership and accountability. He believes that as the only institution in Canada, with RMC Saint-Jean, dedicated to educating officers, RMC needs to embrace an ethical climate in order for the CAF to have effective leaders.

“When I was in the College, I don’t remember talking about ethics at all,” said the RMC graduate, “but now as a general officer, I realize that it’s the most important thing we can talk about.”

Setting the tone at the beginning of the year, the Commandant reinforced the College’s strict adherence to the CAF’s rules and regulations. Under his tenure, breaches of conduct, including drug abuse, sexual harassment, and conduct unbecoming of a CAF member will not be tolerated.

While it is important to enforce strict rules to maintain discipline and morale, it is more important to do so with the goal of building an ethical culture in mind. As such, the Commandant’s strict policy on misconduct is fitting in accomplishing the end state of the SSAV report.

Another important change that was implemented as a result of the SSAV is enforced graduation requirements. An OCdt, in addition to the Academic component, must truly meet the standards in the Second Language, Athletic, and Military pillars before he/she can be commissioned.

In the past decade, cadets were commissioning with deficiencies in one or more of the pillars. Part of the CAF’s expectation of the College is to produce junior leaders who are fit, bilingual and have experience in leadership positions.

“This institution has a reputation,” he said. “When you go out there and it says that you graduated from RMC, they expect you to be in shape, bilingual and to have a degree and look at problems with an analytic way of thinking.”

For him, the four pillars are about ensuring lifelong success for a cadet. Although the new graduation requirements are stricter than in the past 15 years, he will do all in his power to enable cadets to succeed, provided they demonstrate the motivation and a good attitude.

One of the most important aspects of his plan to ensure a strong graduation rate is the creation of a student success center in the bottom floor of the Massey building. The RMC Success Center, which is slated to open early this semester, will be a space where cadets can go for academic help, health promotion services, and conflict resolution.

As the College’s highest ranking member, the Commandant is ultimately accountable for everything that happens on the peninsula, from overseeing academic research with the assistance of our Principal, Dr. Kowal,  to ensuring that cadets have the tools to meet the graduation requirements.

“My main responsibility here is quite simple,” he said. “It’s a question of accountability, so everything that we do at this College, from general administration to the success of our students to leading the institution, I’m accountable for that.”

Although his vision of RMC is ambitious and will require cooperation and effort from everyone, from the first years all the way up to the Director of Cadets and the Principal, BGen Bouchard has been clear that this is a “no fail” mission. Thus far, he has been impressed with the progress that’s been made.

“I’m happy and quite proud to see how serious our fourth years are about this,” he said. “They are a good example for this College, and that’s the way that it should be.”

So far, according to the Commandant, the CDS is pleased with the progress that’s been made in implementing the SSAV’s recommendations. More than half of the report’s recommendations have been actioned, with about 45% still in the planning process.

Despite this, he realizes that there is still more work to be done. Cultural change, in particular, cannot be accomplished overnight. In his opinion, it will take four years to change RMC’s culture.

Ambitious, almost to a fault, and undaunted, he remarked that, “I’m sometimes naïve. I think that I can change the College in a few months, but now I realize that it will take some more time than that, but we’re moving in the right direction.”

With two sons currently in Military College (one in Kingston, the other in St-Jean), and his daughter potentially on her way there, BGen Bouchard wants to build an institution where everyone is empowered to reach their full potential and learn to become analytical, capable, and ethical leaders.

“I look after this College in the same way as I look after my family,” he said. “The decisions that I make for OCdts here are the way that I would make decisions for my family. I don’t do what’s popular but what I think is best.”