For Canadians the First World War (or The Great War as it was known) began in August 1914. The heaviest fighting ended November 11th, 1918, with the Armistice with Germany, but for Canada, the War itself didn’t actually end until mid-1919 when the Canadian troops serving with the Allied Intervention Force in Russia were withdrawn.

In all, the Great War claimed millions of dead and millions more wounded or missing, making it one of the deadliest conflicts in human history. Canada suffered near 61,000 dead and 172,000 wounded. This brutal and hard fought conflict left not only men broken in mind and body but it also inflicted deep psychological wounds on the psyche of the Nation. In the immediate post-war period, all across Canada, this angst and grief found expression, in part, by the creation of thousands of memorials to honour the fallen. Along with the grief there was also a great sense of pride in the accomplishments of the Canadian soldier. The battlefield at Vimy Ridge may not have been the literal, “birthplace of the Canadian Nation,” but pride in Canada’s wartime accomplishments certainly increased Canadian patriotism and spurred our political evolution to independence within the British Empire.

Ex-cadets of the Royal Military College of Canada played a prominent role in the Great War, serving with both Canadian and other British Empire forces in every theatre-of-war. Although the pre-war output of the College was relatively small (RMC output was geared to the needs of the tiny, pre-war Regular army and militia: a conflict on the scale of the Great War was inconceivable) ex-cadets played a prominent role in the War. When the First Canadian Division went overseas, 22 % of its commanders and staff officers were ex-cadets, and by the Armistice, the percentage of RMC ex-cadets among the whole CEF was 23 %. Some 147, or just over 10% of ex-cadets serving, were Killed-in-Action.

In the immediate post-war era RMC built memorials to the fallen and established other commemorative sites. Street names and geographical features on the College grounds were renamed for significant battles; the Class of 1910 planted eight birch trees in memory of eight classmates killed; the new auditorium, dedicated in 1922 as the Sir Arthur Currie Hall, was decorated to commemorate the service of the Canadian Corps and the College War Memorial – the Memorial Arch, was officially unveiled in 1924.

A decade later, the last, and the most unusual, Great War memorial was added to the College. Two bosses (i.e. gargoyle-like) heads depicting the cartoon characters Old Bill and Alfie were placed over the side door of Yeo Hall, the newly constructed Cadet Dining Hall. Old Bill and Alfie were two of the several cartoon characters created during the War by Captain Bruce Bairnsfather, Royal Warwickshire Regiment. These characters represented ‘everyman’ –the scruffy, but rock solid, front-line soldiers who, “coped with everything the enemy, their NCO’s, their officers or the Staff could throw at them.” They were universally known and beloved (except perhaps by senior staff officers whom Bairnsfather often satirized). 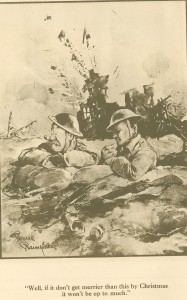 Popular with both troops at the front and civilians at home, Bairnsfather’s drawings were an important factor in maintaining morale. The caption of his most famous cartoon, “Well, if you knows a better ‘ole go to it,” became the catch phrase of a generation.

Why Old Bill and Alfie found their way to RMC is unknown, but presumably the Commandant of the day was a fan (every RMC Commandant from 1919 to 1944 was a veteran of the Great War). A small officers’ mess was tucked into a back corner of the second floor of this newly built Cadet Dining Hall. The stairs leading up to the Mess were accessed by the side entrance decorated with the two famous heads and the bar was called, “Bill and Alfie’s”. The RMC Officers’ Mess was relocated long ago, but the original bar area, now incorporated into a greatly expanded Cadet Mess and Recreation Centre, is still known as ‘Bill and Alfie’s”.

The Great War, the world’s first industrial mass-war, was a global catastrophe that has given rise to a century of change, conflict and revolution. The title of Margaret MacMillan’s recent book, The War That Ended Peace, says it all. We are still struggling with the War’s consequences. Despite all the horrors of war it is perhaps fitting that one of the enduring Great War memorials to be found at the Royal Military College consists of two cartoon figures- symbols not of loss and grief but of the indomitable human spirit, the spirit that can triumph over adversity and that gives us hope for a better world. 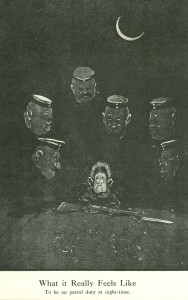