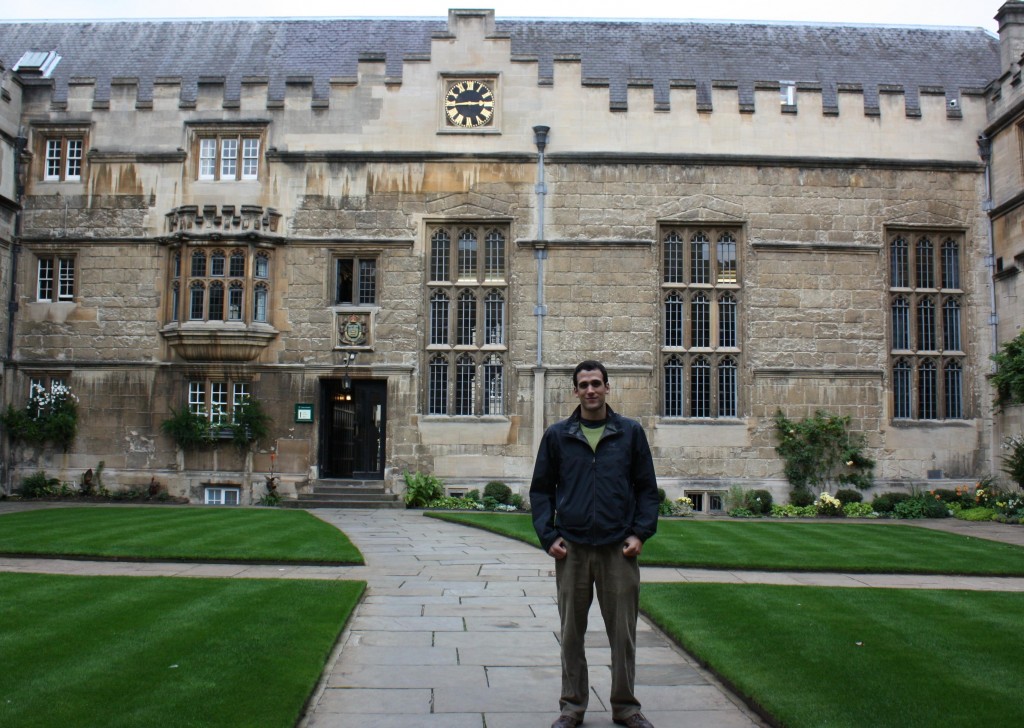 Almost an entire year has passed since 23988 Gino Bruni (RMC 2008) was declared a 2010 Canadian Rhodes Scholar, RMC’s first in over 20 years. Last month, he departed for the University of Oxford, where he will be studying for the next two years. Brent Fisher recently spoke with Gino regarding his initial impressions of the Oxford experience:

B: Gino, when did you arrive, and did you start classes right away?

G: I arrived in Oxford on Sept 27, and didn’t start class until October 6. The first week was filled with Rhodes events in order to get to know Rhodes Scholars from different countries and from upper years. I also had an orientation period at my College where I was admitted to the College. I attended many events to meet other graduate students.

B: Studying at Oxford requires that you take membership in one of its colleges or private halls. What is your college, and what makes it special?

I am at Jesus College. It is located right in heart of the city of Oxford, which is one of the main reasons I chose it. Jesus College is one of the smaller colleges with only 400 students. As I am taking a second BA in Law I am part of what is called the Middle Common Room, which is a room for graduate students. The MCR also organizes events throughout the year that allows me to interact with graduates in my college.

B: What are your impressions of the Jurisprudence program?

G: I love the jurisprudence program. It is very busy – I have never read so much in my life! – but the content is very intriguing; I especially like the lectures and the material on criminal law. There are so many interesting current cases in criminal law that you couldn’t even imagine. In addition to lectures, I have also attended tutorials or “tutes” as they call them here. This is the main way that subject matter is taught at Oxford. It has been quite enjoyable, but I was very surprised by the intelligence of the 18 year olds that are taking law and are in tutes with me.

B: How many others hold senior status?

G: I am not entirely sure. In terms of the Rhodes group, there are three including me. It is important to note that in most countries law is an undergrad program, and therefore many international students take a Bachelor of Civil Law (BCL), MJur in Law or DPhil.

B: What did you do throughout the month prior to leaving for Oxford?

Throughout the month of September I was mostly back at home in Calgary saying farewell to my parents and friends. I also was back in Kingston for a week where I stayed with Bill and Rolande Oliver, for which I am most thankful.

B: Before leaving you attended the Rhodes Gala. Can you describe the experience and comment on your interactions with the other Rhodes Scholars?

G: The Gala in Ottawa was extraordinary. It took place on the last weekend in September, just prior to our departure to London. It was the first chance for me to interact with the other Rhodes Scholars from Canada in my year. We visited the National Art Gallery, the Ada Khan Foundation, and had a private tour of Parliament from MP John Baird.

The highlight of the weekend, however, was the sailing out dinner on the Saturday. It was at this point where you had the chance to interact with scholars from prior years. For instance, I interacted with a Jesus College graduate from 1965. There was also a great and frank speech from a Justice of the Court of Appeal in Ontario who explained the realities of Oxford. I really appreciated her honesty and I have already used some of her advice.

B: Will you be involved in any extra-curricular activities at Oxford?

G: I have decided to partake in two extracurricular activities: I am on the Varsity Blues ice hockey team, and I also plan to row for my College.

B: What are your overall impressions of the experience so far? 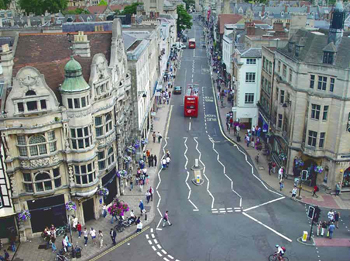 G: I was walking down High Street in Oxford towards my Matriculation Ceremony, which is a traditional ceremony for admittance to Oxford University, and it hit me how beautiful Oxford is, and how lucky I am to be here. The environment is something I believe everyone should have an opportunity to experience, even if only during a short vacation. My program probably ranks in the top two or three in terms of workload in comparison to those of the other Rhodes Scholars, so already I have had to try and organize my time efficiently. But for the first time in my life I feel like I am doing something I truly enjoy and not just doing something because I am good at it or that it comes naturally.

B: Thanks again for your time Gino. Do you have a message for cadets and alumni back home?

G: To the current students of RMC who still have an opportunity to apply for the Rhodes, please do so. To be at Oxford is an enlightening experience, and I have loved every minute of it so far. I also want to say that RMC has prepared me very well for my experience here: I am again feeling the time constraints of school along with other duties such as sports. My six years at RMC helped me to develop time management skills that are transferable to my experience here at Oxford.