The lieutenant colonel from Department of the Army had arrived at the security entrance to an old German castle.   He had recently performed the task he had traveled to the site to conduct at the 7th Army Training Conference, the German/U. S.  Army Steering Committee talks at Sonthofen and at VII Corps for the commander in Stuttgart. 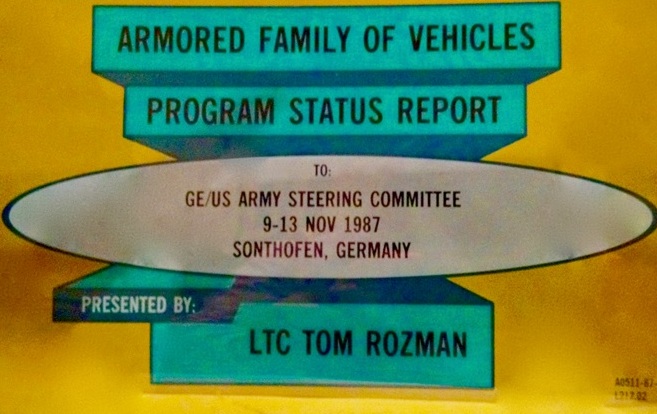 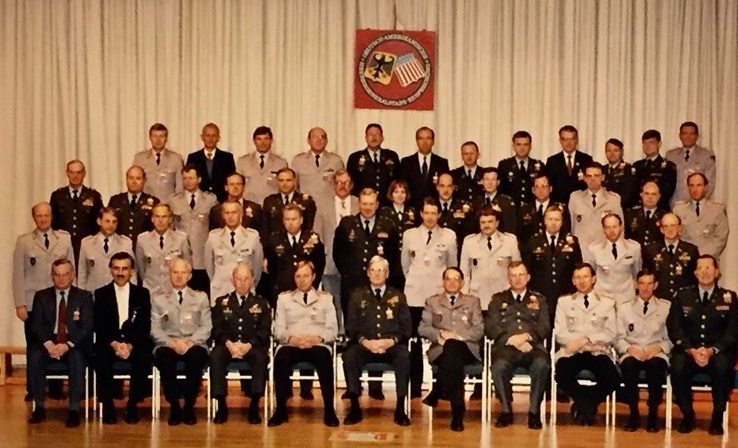 He was received by the security element and escorted into the old fortress meeting V Corps staff inside.  The group proceeded deep into the bowels of the castle into a “bunker” far below the upper building.  V Corps was in the process of a Tactical Operations Center exercise at a location away from its administrative headquarters. The “bunker” was used for initial tactical deployments.  It was a hardened site that could withstand major aerial and artillery fires attacks.

This sense of déjà vu due to past associations being present in a group when performing such tasks as a complex briefing to Army senior leaders on its developmental initiatives, lent the lieutenant colonel a small quotient of confidence. It intimated that thanks to the previous associations, the briefing would be a positive event without undue sniping.  Such proved the case.

The briefing concerned the first year report of a major Army initiative that had been launched in the later Reagan Administration.  It was a Department of the Army Task Force tasked to examine, develop findings and make recommendations on the course the Army should take in the continued development of its armored force starting ten years from the initiation of the task force.

What made the preceding interesting was that the Soviet Union still existed as an opponent in an on going Cold War.  As well, the Army was still deep in the throws of the most comprehensive and expensive modernization of its armored forces since WW II.  It was fielding the new M1 Abrams Tank and M2 Bradley Infantry Fighting Vehicle Systems, the supporting systems, and the new organizations designed to optimize these new combat systems.

It was unprecedented for the Army to accelerate study of a follow-on system so early in the development process, especially given the life cycles of such systems.  These tended to usually be a good 20 years after introduction with expected upgrades in the capability of system components—and the two systems being fielded had been designed to be platforms that could accommodate some following enhancements.

The primary targets of the Task Force’s first year report out briefing series in Germany, as instructed by the major general that directed the task force’s first year’s effort, were senior armored force officers deployed to U. S. Army Europe.  In the case of V Corps, the officer’s of interests were the Corps commander and his senior staff officers.  These officers would typically be expected to continue in future assignments over the next five years to effect armored force direction.  Some would have following assignments in aspects of the development army.  As well, the task force was reaching for feedback and as much consensus as possible in the direction of future task force work.  It was critical to inform this body of task force findings, direction and recommendations.

The briefing package was extensive and comprehensive.  Nevertheless the briefing proceeded well and the main points were made.  Questions were fielded, especially from the Corps commander who had received some advanced input from other communications. The group of armored force officers present came away from the briefing session with a sense of Army thinking regarding next generation systems sufficient to support later informed participation they could be expected to have in following assignments.

After the briefing a question and answer period followed and then some socializing. The corps staff returned to the exercise in progress and the briefing officer was escorted back to the dismount point by security.  He than made his way in his rented private vehicle to the autobahn and to Frankfurt am Main for the return flight to the United States.

As a leadership exercise on a very large organizational level, this initiative illustrated a remarkable attempt with the communications available at the time to engage leaders at all levels regarding the progress of an examination of future development of that organization.  An attempt at consensus, buy in, and at the same time feedback and critical input, was being made.  It must be noted that the outreach included reviewing bodies such as a Department of the Army board in form of senior retired executives (four star generals) and published articles to various professional and industry journals and outlets.

The Task Force would operate for two more years and overlap and engage with other significant contemporary or following Department of the Army initiatives and task forces, the Army Armor Anti-Armor Task Force being an example.  This also included work with the Air Force and Marine Corps.

In the event, the task force recommendations were not implemented as initially developed.  For many later developing reasons, the armored force remains mounted on a chassis system comprising the M1 and M2 systems and some older systems such as the M113 with a range of upgrades that continue to be applied.

The above said many elements of the recommended concepts that developed from the task force’s work appear in following developments and system proposals in the U. S. and other countries.  Interestingly, some ideas reappear in current Russian work.  As well, the task force explored other systems and emerging technologies that would likely work as components or in parallel with armored forces of the future such as drone systems and more advanced wheeled armored systems.  Many of these related efforts have since borne fruit with the force in the area of drones and wheeled light armored systems, the latter in form of the Stryker System.

As an exercise in strategic leadership, the task force’s effort and its extensive work to keep other force leaders informed and engaged may have been unparalleled.  But in the event, it seems from following developments to have borne good fruit and this occurred regardless of major force upheavals such as the post fall of the Berlin Wall force reductions—much work with industry and senior and mid level Army leadership planted seeds that later sprouted and matured into fielded and effective systems in the force.

Leadership clearly has many forms.  In the case of the “development army,” a key for any leader is the ability to envision a system need and how to negotiate the definition of that need into a requirement that becomes funded and fielded.  To do that a strategy of engagement and communication with an extended community of leaders, civil and military, is necessary. The V Corps Task Force briefing was one example of an effective part of that leadership approach.

Chasse-Galerie: The Painting and the Plaque - Part 9