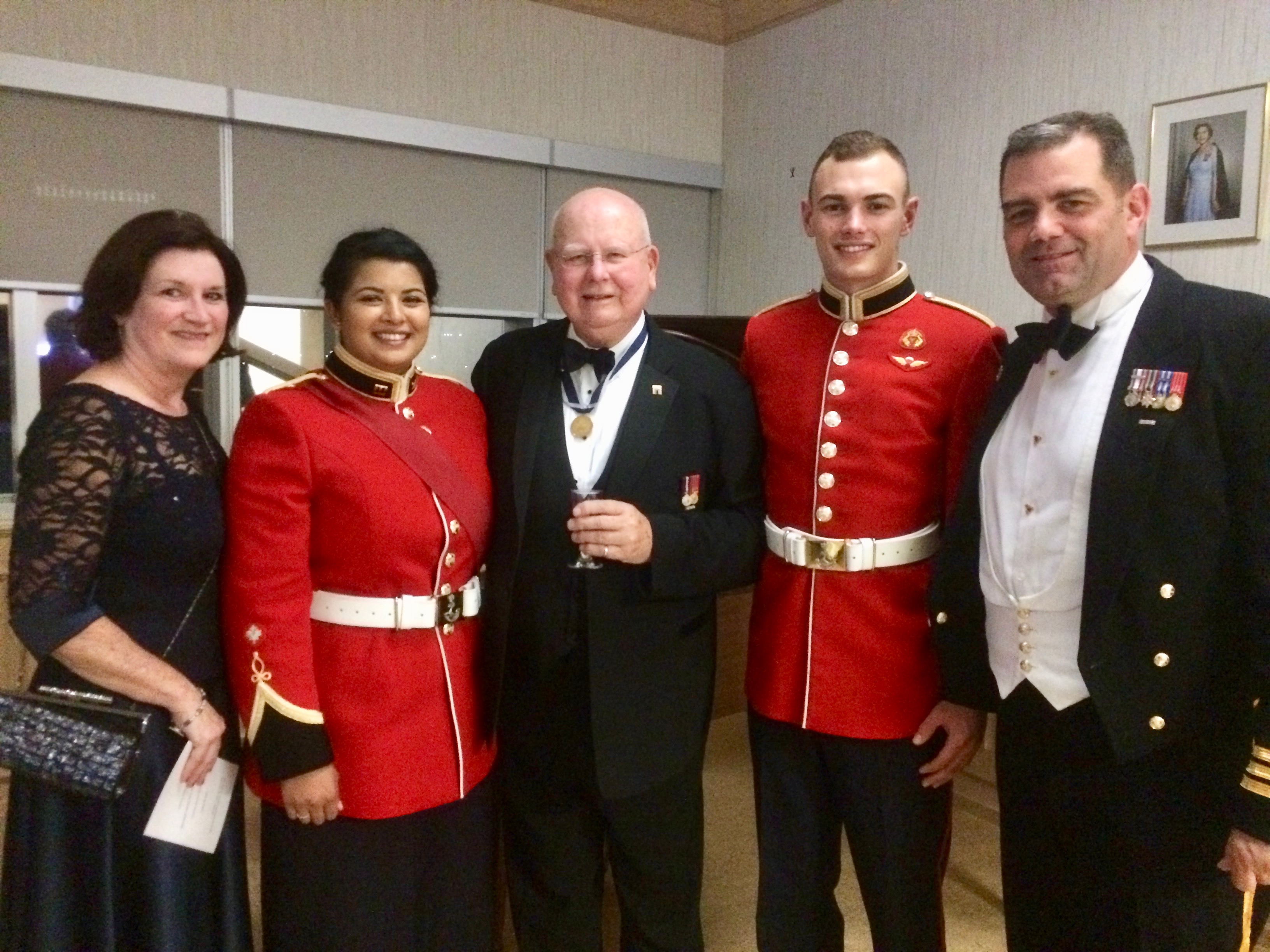 This past weekend, myself and NCdt Monika-Isabel Pinto Lee, were chosen to represent the Royal Military College of Canada (RMC) at the Naval Association of Canada conference in beautiful St. John’s Newfoundland.  Over the weekend, the two of us took part in a variety of social and educational events that gave us an incredible insight into naval culture, the marine industry, and the history of the RCN.  For myself and Monika, opportunities like this do not come around often and any chance to leave landlocked Kingston, ON for either coast is an absolute treat.

At the conference, we had the opportunity to take part in discussions on topics such as human issues in passenger ship evacuation, training for maritime operations in the Canadian Arctic, and offshore safety and survival training at the Marine Institute of Memorial University Newfoundland. In addition to the excellent briefings, we received tours of the multi-million dollar training simulators at MI as well as their firefighting and survival training facilities.

As you can imagine, we found these experiences to be captivating and informative, however as I sit at my desk back here at RMC and reflect, what really made the trip special was the time I spent with the members of the NAC.  Over the four days, myself and Monika had the opportunity to meet and speak with veterans and industry leaders, dine with four Battle of the Atlantic Veterans, and drink a special 75th anniversary brew in the time capsule that is the Crow’s Nest Officers Club.  For a fourth year naval cadet who is exactly 200 days away from his graduation (fingers crossed), getting to speak to those that have already seen and done it all gave me the kind of perspective that you just cannot get anywhere else.

Monika shared in my sentiments saying:

“Now a week back from our trip to the NAC Conference, it is easily the most memorable experience in the past year. Our interactions with the presenters, members and guests have given plenty of insight as to what the NAC does for the RCN. I, NCdt Pinto Lee, believe the most memorable quote of the experience was that “The NAC works for the betterment of the Navy, not under or for it, but for its betterment”. This quote rings particularly true now, as both NCdt Omand and I will be leaving RMCC and joining the fleet next year. Our experiences this past weekend have given us a broader view at what it takes to keep our navy current and competitive. Having the experience of exploring the Crow’s Nest and its history as well as St. John’s gives deeper meaning to what it means to be part of the longest serving element. I look forward to visiting St. John’s as a LogO in a few years.”

We would like to extend the most sincere thank you to Captain (Navy) Jim Carruthers (ret) Class of 1965 and his lovely wife Gail.  Without their generous donation, and interest in keeping naval cadets involved in functions of this nature, we would never have had an opportunity remotely like it. The both of us feel truly fortunate to have had the opportunity. We hope that the NAC can begin a tradition of having future naval officers from RMCC at this conference. 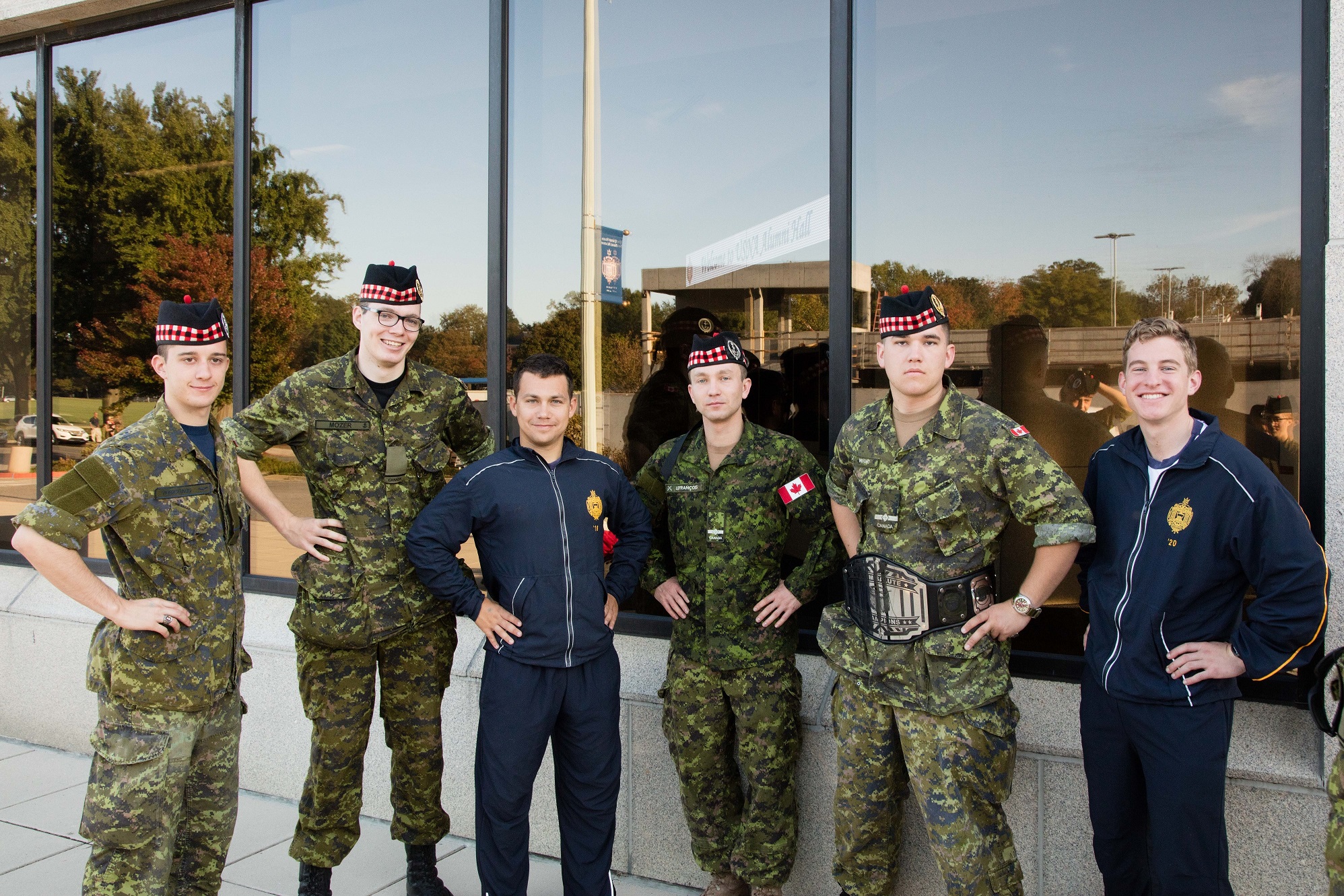 This year, it was the RMC Pipes and Drums’ turn to go to United States Naval Academy (USNA) for our annual exchange, where we alternate between their band coming to RMC and ours going to USNA. The tradition has been going for around 20 years. We arrived there at around 5 in the morning, and our hosts arrived shortly afterwards to help us bring our kit to the rooms. I was paired with their lead drummer, a second-year there. That evening, we held the first practice with both bands all at once. We figured out what we would do for the performances the next day, and then we all went out in different groups with USNA midshipmen, who showed us around Annapolis.

The next morning, we got all together and practiced with our drums before we got dressed in highland scarlets to go out and perform. We walked about 20 minutes from the campus to this enormous, alumni-funded football stadium where the Navy football played another team. A team of four F-18s performed a flypast during the national anthem just after we arrived, after which a skydiver with a large American flag in tow descended onto the field. After a short wait, we then formed up to play for the football team as they walked into the stadium. We played for some people at the massive tailgating party, which happens every two weeks, playing for a few different tents. After that, we had the chance to join in to watch the football game along with thousands of midshipmen. They had a lot of interesting traditions throughout the game we got to experience, and there was a lot of spirit. Navy lost, but it was a close game. After that, we went back to the tailgate party and from there went back out on the town in Annapolis. We left early the next morning to get back to RMC.

Overall, it was a great experience to see USNA, and a great first visit to the USA for myself.

On October 20th , the RMC Expedition Club set out for its annual summit of Mt. Washington in New Hampshire. Mt Washington, the tallest mountain east of the Mississippi river, held the record for the windiest place on Earth for over 75 years and is often considered one of the dangerous small mountains in the World. The expedition was led by Master Warrant Officer Corneau who has decades of experience mountaineering and leading expeditions. Along with the MWO a SAR Tech team leader currently posted to Trenton was kind enough to help out the cadets. Along with the MWO, were eight lucky officer cadets from RMC representing all different trades and years.

After a long eight hour drive to the Adirondacks, the cadets checked their rucks at the trail head and set off at 2200 hrs for their campsite. Hiking in the dark was tough as the route followed a riverbed and navigated by headlamps and the moonlight to guide their ascent. However, after a strenuous 90 min hike they made it to their campsite and were rewarded with a meteor shower. The next day they awoke at 0700 hrs to pack their kit up, eat breakfast, and prepare for the hike up the trail. After a big communal breakfast, and a brief by the navigator, OCdt Bell, they signed out with the park ranger and set off. The route that was picked was one of the harder routes, however it had magnificent views. After an hour of hiking through the brush, the group broke through the treeline and were met with more magical views. The group was also blessed with amazing weather as Mt. Washington is renowned for having some of the harshest weather on the planet. The group finally made it to the summit after several hours of perseverance. Fortunately, there was a weather station at the summit and the cadets were able to take refugee for lunch. After a long and difficult descent down the mountain on a different route, the cadets were grateful for the shower that was awaiting them and the trip into the local town to get a well earned meal. The team retired to a campsite where they spend the night relaxing by a campfire planning their next adventure. The next morning the team set off back to Canada taking the scenic route visit many historical monuments along the away.

The RMC Expedition Club has two yearly trips to Mt. Washington. This year during reading break, a select few will travel to England to hike the Lake District.