Above: The rowing crews of the eight military nations competing for the King’s Cup at the Henley Royal Regatta raft their boats in front of the historic bridge and their support crews at Henley-on-Thames, England, on July 2, 2019. Photo: Vera Bucsu, Art of Rowing, New Zealand

“Your achievement is a badge of honour for life, and your names will always be on the pages of history.”

The regatta, renowned since 1839 as the finest, most historic and most prestigious river regatta in the world, is normally reserved with the world’s rowing elite. This year, the storied Thames River course was opened to crews from the militaries of eight countries to commemorate the centenary of a peace regatta held on the same course in the wake of the First World War.

“At a time when the world was on its knees, the rowing community came together to heal wounds and build normality again,” said LCdr Reed. “One hundred years on, the fittest and finest military crews from Canada, the Netherlands, from Germany, United Kingdom, France, Australia, New Zealand, and the United States of America, have shown their enduring solidarity honouring the past.” 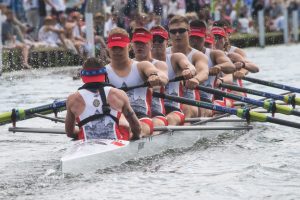 The Canadian Armed Forces crew pulls together in their quarter-final race against the United States crew at the Henley Royal Regatta at Henley-on-Thames, England, on July 5, 2019. Photo: Master Corporal Rod Doucet, Canadian Forces Base Kingston

As it was in 1919, the King’s Cup event at the regatta was an “eights” competition, a race for boats designed for eight rowers, steered by a coxswain.

The Australians won the race in 1919; this year, the United States was victorious. It was a knock-out format. After a qualifying run to determine the draw, quarter-final races reduced the field from eight to four, and two semi-final races determined who would compete for the cup.

Despite being defeated by the eventual champions, the members of the CAF crew were thrilled to have the opportunity to participate in such an historic event.

“It’s an absolute honour to be here, representing Canada, representing everyone who has gone before us,” said 28192 OCdt Liam Vickers (RMC 2020), whose father served as a CAF member in places such as Somalia and Afghanistan, and whose grandfather landed on Sword Beach during the D-Day invasion. “It’s an honour to be able to show my respect as tribute to him as well as all the other Canadians who have gone before me.”

Likewise for 27912 OCdt Deven Deguara (RMC 2020), whose great-grandfather immigrated to Canada from Malta before the First World War, but later took up arms and fought for Canada at Vimy.

“I’m extremely proud to be a part of the Canadian Armed Forces and have a seat in the boat that’s going to row to commemorate 100 years since the First World War,” he said.

All in the same boat

At the awards ceremony, LCdr Reed, a serving officer in the Royal Navy, noted the King’s Cup event was also significant because it marked the first time men and women rowed together in the same boat at an elite rowing event. A first, he said, that is “in keeping with our forward thinking defence.”

16204 RAdm Luc Cassivi (CMR 1988), Commander of the Canadian Defence Academy and one of the CAF’s Co-Champions for Gender and Diversity for Operations, certainly agrees. He visited Henley to acknowledge and thank the Canadian crew and was glad to see mixed crews featured at the event.

“It’s great,” he said. “It’s recognition that everyone contributes to the team and we’re stronger when we’re together and that more barriers are breaking down when it comes to gender or other elements of inclusivity.” 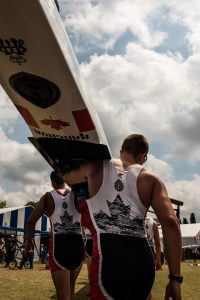 The Canadian Armed Forces crew carries their boat to the River Thames for a final row past dignitaries during closing day ceremonies on July 7, 2019, at the Henley Royal Regatta, at Henley-on-Thames, England. Photo: Master Corporal Rod Doucet, Canadian Forces Base Kingston

History and commemoration were key to the event, as were opportunities for the military crews to get to know and face each other in friendly competition.

RAdm Cassivi said such competitions such are invaluable opportunities for young CAF members to learn about our allies and begin relationships they will build throughout their military careers.

25121 Lt(N) Carolyn Pumphrey (RMC 2011), a rower for the CAF crew, said getting to know competitors from the other militaries will certainly be something the young Canadian officers always value.

“It allows us on a professional basis to become better leaders and understand how other nations operate,” she said. It’s also important because it allows us to understand where other people are coming from.”

LCdr Reed said rowing, in general, is particularly well suited to the military because the qualities that make great rowing crews are much the same as those valued by military units.

In his comments to the competitors, he spoke of technical proficiency, courage and cheerfulness in the face of adversity, commitment, self-discipline, selflessness, integrity, loyalty, humility and respect for others (the crew as well as the opposition).

“These values, this mindset, this spirit that makes you special is synonymous with that of the military ethos that we see here in abundance today,” said LCdr Reed. “My sincere congratulations for everything you have achieved and everything that you are. Enjoy this moment. You have most certainly earned it.”

For more on RMC’s participation in the King’s Cup please see here. 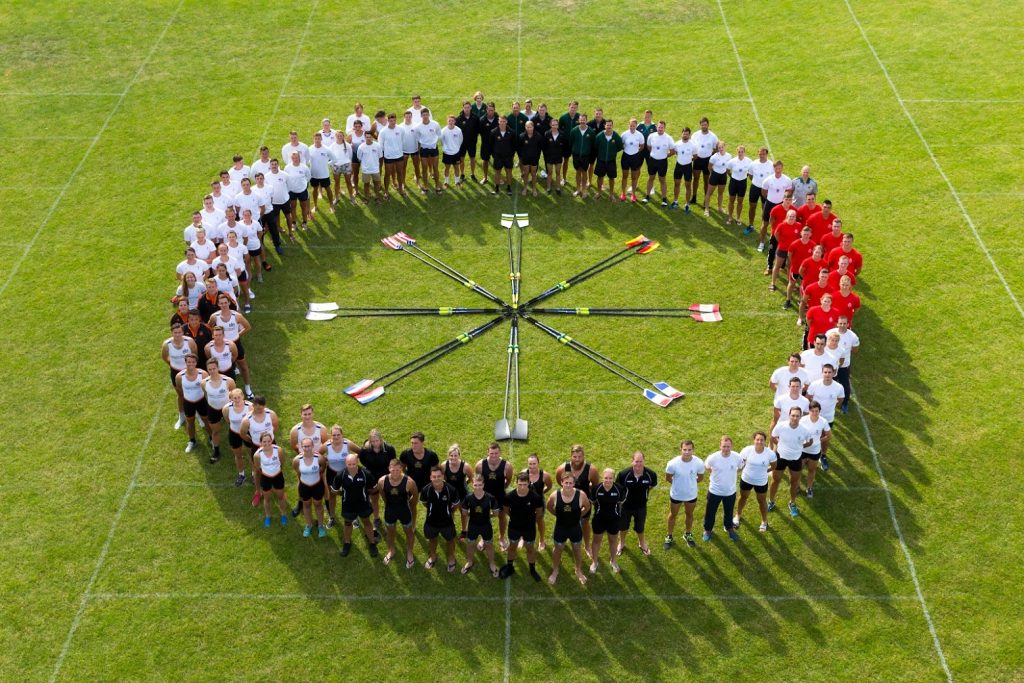 The rowing crews of the eight military nations competing for the King’s Cup at the Henley Royal Regatta illustrate the unity and strength of their alliance at Henley-on-Thames, England, on July 2, 2019. Photo: Sergeant Raymond Vance, Australian Defence Force (ADF)