Soldiers of the 169th Infantry Regiment, one of the 43rd Infantry Division’s three such regiments, were in the process of boarding the troopship MS BLOEMFONTEIN. The War Shipping Administration foreign registry ship MS BLOEMFONTEIN, a 488 foot two diesel engine 10, 500 gross ton converted passenger/cargo ship of the Dutch Ship Company (Vereenigde Nederlandsche Scheep), had been built by the Dutch Shipbuilding Company (N. V. Nederlandsche Sheepsbouw Maatschippji) in Amsterdam in 1934.

The regiment had re-stationed with the division some weeks before from Camp Shelby, Mississippi to Fort Ord, California.  It had recently received drafts of additional officers, non-commissioned officers and enlisted men that brought the division to a pre-deployment over strength.  It had conducted some last stateside training at Ft. Ord and it had turned in old equipment and had been issued new equipment that filled out the equipment tables, all occurring just before the regiment’s movement to the pier at Ft. Mason, San Francisco. 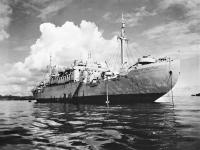 MS BLOEMFONTEIN, a Nederlandsche Dok ship,
as a World War II troopship. Note the design of the “icebreaker” bow.

As the regiment’s Company F proceeded up the gangway one of the squad leaders was informed that he had been promoted to staff sergeant.  Staff sergeants were the starting rank that placed manifested troops in upper deck cabin space on the troopship.  Because of the timing of the promotion and manifesting that had already been completed, the newly promoted staff sergeant would be berthing below decks in one of the lower bunks.  The bunks were stacked eight high.  This would prove an experience requiring some fortitude over the next three weeks as the ship made its way south into the Pacific across the Equator to Auckland, New Zealand.

The sergeant was appreciative of the promotion and despite the challenges of tight quarters, excessive heat in the non-air-conditioned ship and humidity and the occasional  upper bunk man’s being over taken by motion sickness and heaving over the side of his bunk, he was among his soldiers and the company’s other sergeants.  The situation presented an unusual opportunity to set a positive example and lead.  The new staff sergeant determined he would follow a course to lead well in a less than comfortable situation by the example he would set. 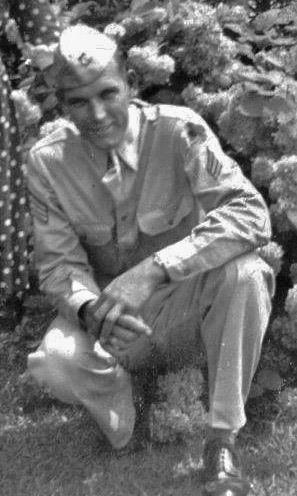 Aside from the festivities of crossing the Equator, the regiment would continue to conduct training as much as possible aboard the ship, orienting the training on integrating the new men into their squads, sections, platoons, and companies.  In addition to setting an example and maintaining the best environment possible in the billeting area, the staff sergeant oriented on the activity to provide direction and a mission focus during the hot weeks of the crossing to Auckland.

Though space was limited, he was able to fashion an effective program that kept his squad’s soldiers focused.  This, combined with platoon and company initiatives along with some entertainment that developed during the Equator crossing (movies and other recreation support provided) all combined to maintain morale and troop focus. Discipline was maintained throughout the voyage and the new men were integrated into the regiment.

The BLOEMFONTEIN and the convoy of which it was a part made Auckland on 22 October 1942.  The regiment was garrisoned in the Warkworth Area north of Aukland and elements were employed on stevedore duty unloading ships as New Zeeland was developed into a major base.

The Imperial Japanese Navy and Army had extended their operations well into the Solomon Islands having landed on Guadalcanal threatening to isolate Australia and New Zealand from American sources of supply and reinforcement .  These initiatives of the Japanese forces had much to do with the rapid deployment of the 32nd and 43rd Infantry Divisions to provide additional forces to the theater to contain the Japanese sufficiently to set the stage for following offensive action.

The staff sergeant’s regiment would figure significantly in these operations, soon deploying to Guadalcanal where the 43rd Infantry Division’s regiments would relieve elements of the 25th Infantry Division mopping up remnants of the Japanese units that had been unable to withdraw.  The 43rd Division would then conduct additional operations in the Solomons with the capstone being seizure of Munda Air Strip on New Georgia. The 169th Infantry would then redeploy and operate along the Driniumor River in New Guinea reinforcing the 112th Cavalry Regiment in its effort to contain the westward movement of the Japanese 18th Army, a badly depleted but aggressive force, that was desperately attempting to join forces with the Japanese 20th Army further west.  (After operations in New Guinea, the 43rd Division would return to New Zealand in August 1944.  There the division’s units would rest and refit for several months preparatory to deploying for the assault landings on Luzon, Philippine Islands.)

The staff sergeant’s approach to leadership continued throughout these operations.  The effectiveness of that leadership was born out by a promotion several months after arriving in the Pacific Theater and engaging in active operations to technical sergeant in which rank he served as a rifle platoon sergeant most often as the acting platoon leader due to officer shortages.  Within a year he had been promoted to company first sergeant and in May 1945 while his company was operating in the Ipo Dam sector above Manila City on Luzon, Philippine Islands, he was commissioned as an infantry second lieutenant.

The sincerity and commitment of the staff sergeant to the form and style of leadership pursued apparently transcended the physical limitations of mind and body.  The approaching three-year journey through these campaigns challenged the sergeant’s resolve with hospitalization for an almost fatal bout of malaria and dengue fever and he suffered battle wounds four times during these operations.  That he persisted in the leader style he had selected on boarding the BLOEMFONTEIN proved to be effective in the long campaign across the South Pacific from New Zealand to Luzon.

The “leader” take away from the staff sergeant’s approach was that he chose to accept the situations that presented and use them to cement cohesiveness within his team.  He experienced the discomfort the team experienced and set an example that rose above the challenges aboard ship in this initial case.  He used the situation as an opportunity to establish his roll as the leader not only by sharing the hardship but  leading the team to rise above the challenges to build their capabilities and confidence in each other and their collective team.

There are moments in a leader’s career where situations do not seem to be positive developments.  In this situation, the promotion coming when it did placed the sergeant below deck, a challenging environment if not for any other reason then the equatorial heat’s effect on people below decks. Yet this was an opportunity to establish effectiveness as a leader which was seized upon by the sergeant.  As the next almost three years would demonstrate, it was the right opportunity to take advantage of.

Note: the BLOEMFONTEIN was returned to the Netherlands (Nederlandsche Dok) in April 1946 and converted to a passenger ship. It returned to commercial service in 1947 until 1959 when the ship was sold for scrap and broken up in Hong Kong.  The sergeant would continue in an Army career until retiring as a lieutenant colonel in December 1965 after his last duty assignment in U. S. Army Europe.