September 11 marks a major date in history. Today, 11 September 2011, saw a significant milestone here at the International Security Assistant Force Headquarters in Kabul, Afghanistan where dignitaries from all countries representable gathered together to mark the 10th anniversary of the tragic day that the World Trade Center towers went down, and over 3000 people representing different countries, cultures and religions lost their lives.

Where was I on September 11, 2001?  I was actually in my room in the back hall of Fort Lasalle between Chemical Engineering classes, barely a week into my third year at RMC.  One of the 4 Squadron second years came running into my room to ask me if I had seen what had happened on the news.  What followed was a day of chaos at the college as students and professors alike ran around trying to follow the news and maintain some semblance of a schedule while everyone tried to speculate what this would all mean for us.  I later found myself on 5 deployments to Afghanistan as a C-130 hercules navigator, never having been able to predict that my career would bring me there.

Commodore Bill Truelove, 15185, former RMCC Commandant, had only recently been posted to Command Her Majesty’s Canadian Ship Regina in August of 2001, and on September 11th of that year he was on day one of the Commanding Officer’s Course in Halifax, N.S.  but events of that day created a ripple effect that cancelled the course, and then later had HMCS Regina, under Truelove’s command, shipping off to the Persian Gulf in February 2003.

Today, Cmdre Truelove and I were extremely honoured to be invited by American friends to join them and represent Canada at the US Embassy’s ceremony of commemoration for the 10th anniversary of the terrorist attacks on American soil, so close to our own home and affecting many so Canadian families and their sense of safety and security.

Now serving as the Deputy to the Deputy Chief of Staff Communications at ISAF HQ, Commodore Truelove and I stand alongside the memorial sculpture, built of steel from the rubble of the twin towers, that was given to the FBI serving in Afghanistan and in turn donated to the US Embassy for display with me serving as his Military Assistant for the next year while Canada shifts its role from a combat mission to a training mission and NATO prepares for the future years of continuing to transition Afghanistan into an independent and self-reliant country once again. 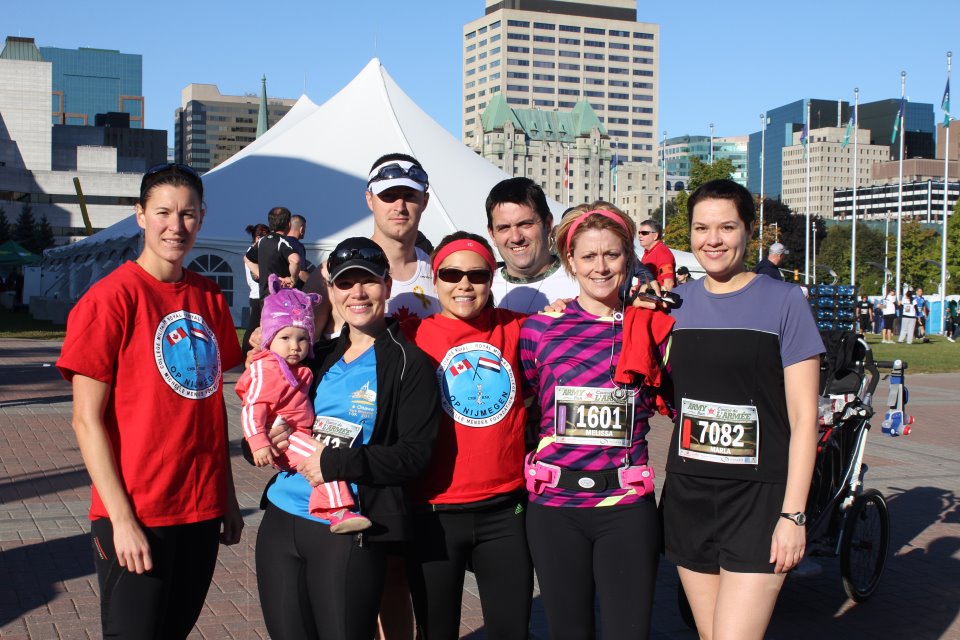 For a third year in a row, friends and family of 22007 Major Michelle Mendes (née Knight, RMC 2001) collected donations and ran in her memory in the annual Army Run in Ottawa. Major Michelle Mendes, or “Mic” as she was known by many, ran the Inaugural Army Half Marathon in 2008. This year, her mother Dianne Knight and sister Melissa were able to join the group and lead the charge in the fundraising campaign, each taking part in their first 5k and Half Marathon respectively. Over $5000 was collected for the Michelle Mendes Memorial Fund which is operated through the RMC Foundation and directly supports the RMC Nijmegen team. Thank you to all the donors and hope to see you at the Army Run next year!

Sandhurst: the changing face of the Army

The trainers at Sandhurst are picked from the cream of the British Army, each regiment eager to send its best to recruit the best. And while it is a rewarding posting, the trainers work just as hard as the cadets, not all of whom will make it to the end of the gruelling course. In each intake of 270 – the most recent includes 32 female cadets and 26 from overseas – some 40 will drop out.