Christmas and the Company Mess

Christmas was fast approaching.  It was December in South Korea and the temperature had plummeted accompanied with snow.  It would be a cold and white Christmas.

The rest of the Army had been consolidating mess operations from company to battalion, but in Korea separate company messes continued to operate under their respective companies in the battalions.  Hot rations being part of the soul of infantry morale, the competence, skill, resourcefulness and culinary abilities of the company mess sergeant were as valued in the rifle companies as the comparable skill set of any other senior non-commissioned officer in the company, perhaps more so.

Company B was fortunate in this respect.  The resident mess sergeant, though a relatively younger man who had advanced rapidly in Army food service having won several awards for his skills, had taken a liking to Korea and extended his tour several times.  He knew the local situation and operated very proficiently in that system but within the standards—though some colleagues might take liberties, he had made it his calling card to work within the regulations that applied.  He ran a very tight ship in his mess but he also engaged his mess team section in a way that engendered loyalty and hard work by his team.

Some hallmarks of his operational style told a story of their own.  His Quonset Hut mess hall/kitchen was always immaculately clean and inviting with decorations often placed on the tables and for major events—the entire facility had a homey aspect.  His kitchen, despite being in an aged Quonset hut on a concrete slab was always pristine clean—one sensed they could eat off the floor.  Yet this operation was thoroughly mission capable rendering first class field service when the company was deployed—meals in the field were always outstanding. 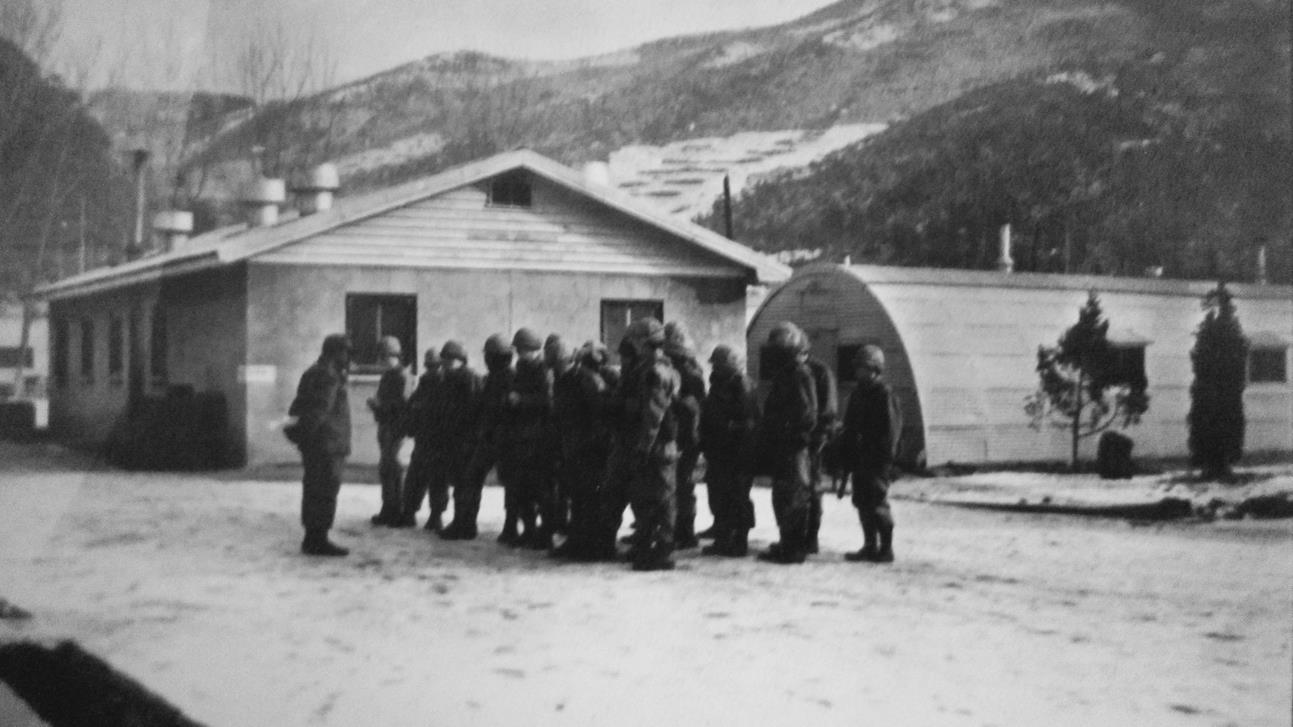 Company B’s company street after a light snow—the mess hall Quonset is to the left out of the photo. It was a Quonset hut identical to the one to the right of the cinder block latrine/shower building in center photo. A platoon forms preparatory to conducting tactical training. Note the snow accumulated in the higher ridgeline surrounding the cantonment.

In this regard, whenever elements of the company were conducting extended field training or in a deployed status, even local training and security missions, the mess section in the cold months deployed hot beverages and soup to the company’s soldiers and iced tea and other cold beverages during the warm months. 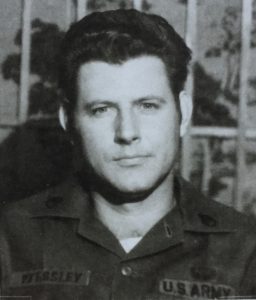 The mess sergeant was the heart and soul of this operation and his commitment to the support of the soldiers of the company was such that the soldiers reciprocated—the sergeant well regarded by the rank and file.  He was respected and supported by every soldier in the company.  They knew they had a “nugget of gold” in the person of their mess sergeant and they showed that regard in their way.  When details were necessary to support the mess, there was hardly any grumbling—it was almost as if the men thought it a privilege to pull kitchen police.

Of course, every development was not heaven on earth and weather and mission could place demands on the unit and mess team that strained people and resources. But somehow—the mess sergeant always prevailed with outstanding food service even under the most austere and challenging circumstances.  He had that kind of genius and commitment.

And so Christmas approached.  The soldiers and officers of the company were all on 13 month short tours in country.  Their tour dates were staggered based on the levies they had been programmed from by the Military Personnel Center in Alexandria, Virginia.  This meant that individuals and small groups were periodically departing or joining the company throughout the fiscal year.  Some soldiers had extended their initial tours and if approved, more than once.  But most soldiers only intended to be serving in Korea for their 13 months as assigned, looking forward to returning to their families in the Continental United States.

This separation from families gave a special poignancy to the Christmas Dinner and celebration by the soldiers of the company, that holiday next to Thanksgiving being the most family oriented of the holidays.  For this reason, any company mess worth its weight spared no effort and pulled the stops out to prepare and provide the company’s Christmas Dinner—in many ways the mess team viewed Christmas Dinner as its masterpiece and its heartfelt Christmas gift to the company.  The spirit of giving by the soldiers in form of Christmas dinner almost took on a sacred reverence.  And this was a true sentiment—after all, the company was the family of the soldier when deployed.

The sudden cold snap promised to challenge the mess section.  The Quonset Hut the mess hall occupied with its space heaters and next to no insulation would be a challenge to work with.  Just keeping the mess hall warm and preparing food hot over the course of the dinner would be a challenge.  But the mess sergeant was, as was his want, thinking ahead.  He made arrangements to sequence the platoons through the meal in the dining area and arrangements for additional space heaters.  He made adjustments to his serving line and warming and heating systems to keep the hot dishes warm.

Though he followed the required recipes of the Army, he demonstrated his unique culinary expertise with innovation and creativity in several specialties designed to make the company’s Christmas Dinner a truly special one.  The mess sergeant’s efforts were successful beyond expectation.  Every soldier appreciated the mess sergeant’s initiative and care in making their Christmas Dinner something memorable even under the circumstances of a deployment to Korea. 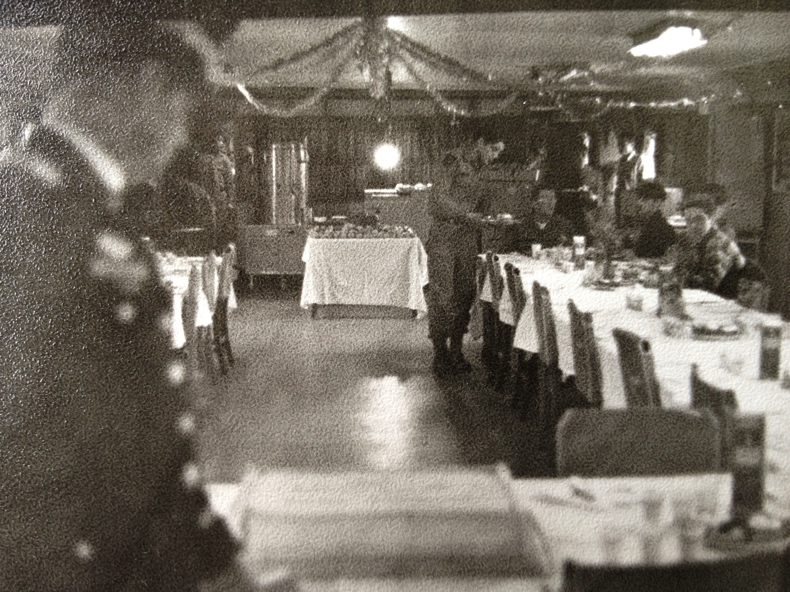 The company and its soldiers savored the masterpiece of their mess sergeant and his team.  On that cold Christmas Day in Korea, far from home and family, the dinner brought a sense of these far away things of greatest value to the deployed soldiers.  They shared the dinner together deepening their bond as comrades in a far away land defending the freedom’s they held dear.  Each soldier would in his own way over that day and the days to come express his appreciation to the mess sergeant and his team for the Christmas Dinner that made the company a home and family away from their loved ones. 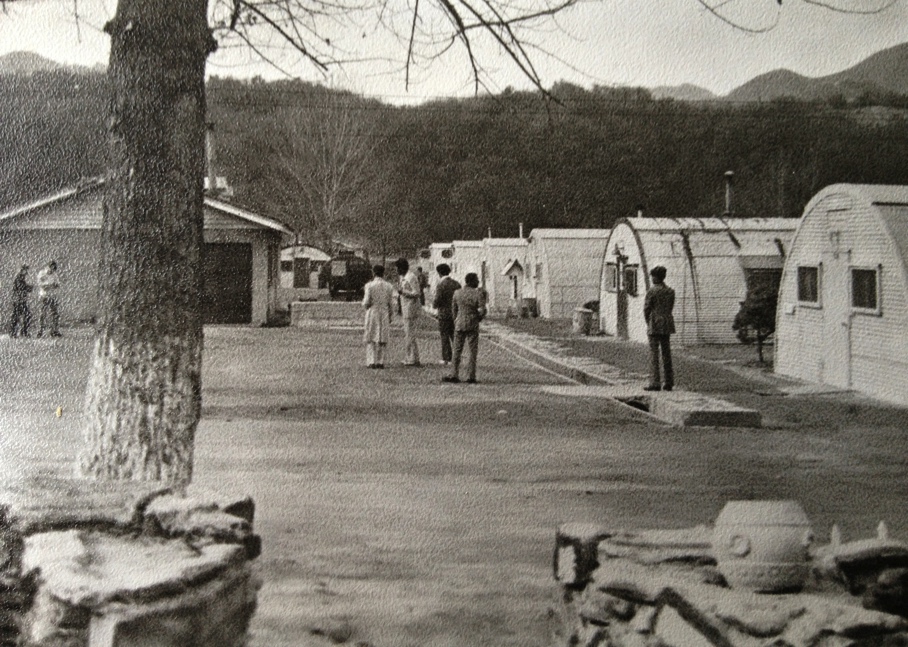 Of all the many examples of leadership I have experienced, this mess sergeant and his team demonstrated a form and practice of leadership that I think was particularly effective.  In a challenging environment with an equally challenging mission, this non-commissioned officer and his team, in the support area of food service, made an incalculably impactful contribution to the morale and effectiveness of a combat infantry company.  They led by example and a selfless dedication that never flagged.  I remember them to this day—they taught me a great deal about leadership.

A postscript…the Army continued with the consolidation of its mess/food service operations from company to battalion level.  Large, more efficient food service operations came into being leveraging new preparations and food processing technologies and procurement.  The personnel in most of my experience continued with a high level of commitment to their mission and in the tactical units where teams would be sent forward to the company trains to provide prepared meals, elements of the quality of leadership exhibited by this company mess section continued to manifest themselves.  But the relationships and direct connection between the individual infantry soldier and the mess section were not the same and some of that unique form of leadership exhibited by a “mess sergeant” of the old school company mess became a memory.

Cadets Going Home for the Holidays: Club Branches Invite You to Meet Up With Them