One of the main highlights during the recent Reunion Weekend was the “Old Brigade” hockey game on the Saturday afternoon against a group of I Years who were augmented with a “ringer” aka the commandant.

The sage, elderly and intrepid team of old warriors from the Class of 1968 (eager and proud to be invested into the Old Brigade) had issued a challenge to the studious, younger (like 50 years younger!!) and robust Officer Cadets from the Recruit Class.

This was the first time in RMC history that a hockey team, composed entirely of Old Brigaders, had taken on the recruit class in a classic hockey game. 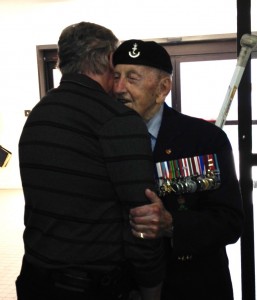 The game itself was slow-paced by most hockey standards; nobody expected more, certainly not the cast from the Class of 1968 who suited up for the game.  The spectators at the game were mesmerized by the finesse and the “shock and awe” impact of the Old Brigade team – a few players hadn’t skated for 20 years, some didn’t know whether they needed a right or left stick, 7660 Marty Hankes-Drielsma the goalie “volunteered” to defend his classmates. The score for what it is worth was 4-4.

What was much more impressive was the enthusiasm shown by both the “recruits from the Class of 2017” and the Old Brigaders. One often hears of the special bond between Ex Cadets – friends for a lifetime etc. All of us who were around Constantine Rink that late Saturday afternoon saw it in action. Not only from the boys from ’68 but also from many from the Class of ’73 who took time out from the busy weekend schedule to take in the game.

A special moment was captured by a keen camera person when “The Maj”, himself Major Danny McLeod entered the Rink. He was greeted by many Ex Cadets in the lobby. Photo left is his former team captain from the 1968 team, 7675 Ken MacAuley – overheard saying, “You remain an inspiration to all of us who had the good fortune to have our paths cross yours!!!

8455 Thomas H. Prescott (Class of 1970) has over 30 years of engineering and project management experience on design, installation, and testing of mechanical and process systems in various areas including military, petrochemical, and electric power production industries. Mr. Prescott has particular expertise in vulnerability assessments and pilot testing of control facilities for mussel biofouling control.

He has experience with many clients throughout Canada, U.S.A., and overseas and is currently a partner and senior project engineer at RNT Consulting Inc

Ken Ellis (Class of 1977) was appointed Managing Director of WANO in April 2013.

Ken’s career has also included a two-year assignment in France as the Ontario Hydro Liaison Engineer to Électricité de France. Ken was previously licensed as a Bruce B Shift Manager in the late 1980’s.

Ken was born in Espanola, Ontario, Canada and graduated from the Royal Military College of Canada with a degree in Mechanical Engineering. Ken spent four years as an Aerospace Engineer with the Canadian Armed Forces, primarily in Search and Rescue prior to joining Ontario Hydro. Ken is a registered Professional Engineer. 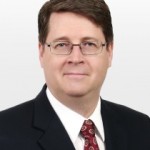 12733 Phil Walters (Class of 1980) is a Professional Engineer (Industrial) with more than 25 years of leadership and problem solving in the construction and manufacturing industries. Bringing to bear the skills and experience of his multi-disciplinary background, Phil has an intuitive ability to tackle multi-dimensional construction challenges.

Phil gives practical and pragmatic advice to owners and to contractors with the objective for them to do everything smarter over the entire life of the project. To create conditions for success, Phil is a strong advocate of front-end planning and pro-activity. He is a skilled negotiator, an expert at root cause identification, and has an extensive track record in commercial dispute resolution.

Although Phil has spent the majority of his time in BC and Ontario, he has been involved with construction projects in every province of Canada. He also serves, part-time, with the Canadian Forces Militia as a Combat Engineer. Canada in 1986. After 4 years as an Aerospace Engineering Officer in the Canadian Air Force, Andrew left the military and enjoyed jobs in the Aerospace, Agricultural, and Automotive industries, as well as working for Kor Product Design. He is currently an instructor of Math and Science at Red River College. Andrew was born and raised in Quebec and has lived at least briefly in 5 of Canada’s 10 provinces. He currently lives in Winnipeg, is married, and has three teenage daughters. He loves Jesus, sailing, cycling, singing, and creating small business ideas. 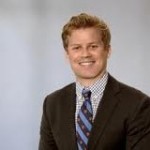 23785 Matthew (Matty) McLeod (Class of 2007) was offered a position in the corporate group of Osler at the New York City office in July, and accepted it. He started in Manhattan on the 30th, and word has it that he is settling into the city very well right now.

We recently caught up with the former RMCC varsity basketball and rugby player. “It’s been an adjustment moving from Toronto to Manhattan, but a very fun and enjoyable one. “

Following his undergrad years, Matty earned a Master of Business Administration Degree (RMCC). He moved on to University Western Ontario earned his Law Degree – while playing varsity rugby for a couple of seasons.