RMC’s Athletics Wall of Distinction, founded and sponsored by the Class of 1970 through its endowment fund managed by the RMC Foundation, was established to honour those who have brought distinction to the college through significant achievements and contributions in sport while at RMC and/or following graduation throughout their athletics careers. After the first induction class in 2017, the selection committee is proud to present another accomplished group of inductees in 2018. 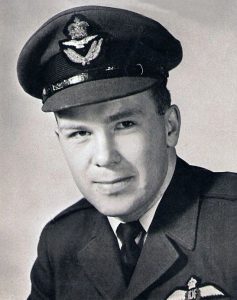 At the upcoming Athletics Wall of Distinction (AWOD) induction ceremony on 21 March 2018, RMC Athletics will recognize John Walter Douglas “Doug” Hargreaves in the Builder category for his exceptional accomplishments at the college from 1965-70 as the varsity football and basketball coach, and thereafter for his lifetime achievements in Canadian amateur football.

Many amateur football fans will recall his name, but few know Doug’s university coaching career began, in part, because of his enrollment in the Royal Canadian Air Force (RCAF). Doug’s natural coaching ability landed him a role as a flight instructor in the RCAF, which he joined with the dream of becoming a pilot. After flying C-119s, Doug got his first opportunity to coach at the university level when then RMC Athletics Director Danny McLeod sought him out for the job. Who better than a military man to coach a team of Officer Cadets?

Proud of his service with the RCAF, Doug eagerly accepted the challenge of coaching at the small military college. During his years at the helm, RMC football rose from mediocrity into one of Canada’s top 10 university teams. Although he made his name across the causeway at Queen’s, it was his experience building the program at RMC that prepared him for his subsequent success.

Thank you to the Hargreaves family for providing additional details from the time Doug spent at RMC. 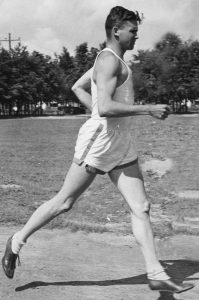 At the upcoming Athletics Wall of Distinction (AWOD) induction ceremony on 21 March 2018, RMC Athletics will recognize 3252 Edwin Alfred “Ted” Tromanhauser in the Athlete category for his exceptional accomplishments as a member of the RMC Harrier and track & field teams from 1950-54.

First a member of the Royal Canadian Air Force (RCAF) and later a field engineer for a private company, Ted left his mark at RMC and on the Ontario intercollegiate running scene. Flipping through the record books, it has been over 65 years since RMC claimed the provincial senior title in what we now call cross-country. Doubtless, Ted played a significant role on the talented team of Officer Cadets that won the Harrier Championship in the fall of 1952; however, the Tromanhauser family (Ted’s wife Liana, plus their son and daughter) says that Ted would have been thrilled to be chosen as an inductee this year, because it would also provide recognition for the team as a whole.

In addition to his success at intercollegiate competitions, Ted was also the master of the One Mile Race at RMC’s inter-squadron meet. A model of discipline, Ted found success on the track year after year, finishing as the only Officer Cadet at RMC to win the One Mile Race in four consecutive years.

Ted’s dedication to his sport was matched by his loyalty to his school. Whether it was attending reunions, meetings, or contributing to fundraisers, Ted was omnipresent. He even encouraged the children of friends and family to attend RMC, and set time aside to accompany them to the grounds he knew so well.

While his accomplishments speak for themselves, Ted’s family best describes his relationship with athletics: “Running was a constant in his life and the last thing he did in his life. It was a way for him to shut off the world around him, find calm and focus. He never lost his competitive spirit; he timed his runs till the very end.”

·       Set numerous RMC and intercollegiate half mile and one mile records

·       Inaugural Tromanhauser Cup recipient, awarded to the winner of the One Mile Race at RMC, 1954

·       Prince of Wales Trophy recipient, awarded for excellence in athletics during his four years at RMC, 1954

Thank you to the Tromanhauser family for providing additional details on Ted’s life.

Over our next two Issues we will be high-lighting four more inductees for the ‘AWOD Class of 2018’.