The Arch Parade and the Beginning of FYOP; Class of 2021 and the RMC St-Jean Connection; & 2021 – In Their Own Words: Pre-Arch Parade 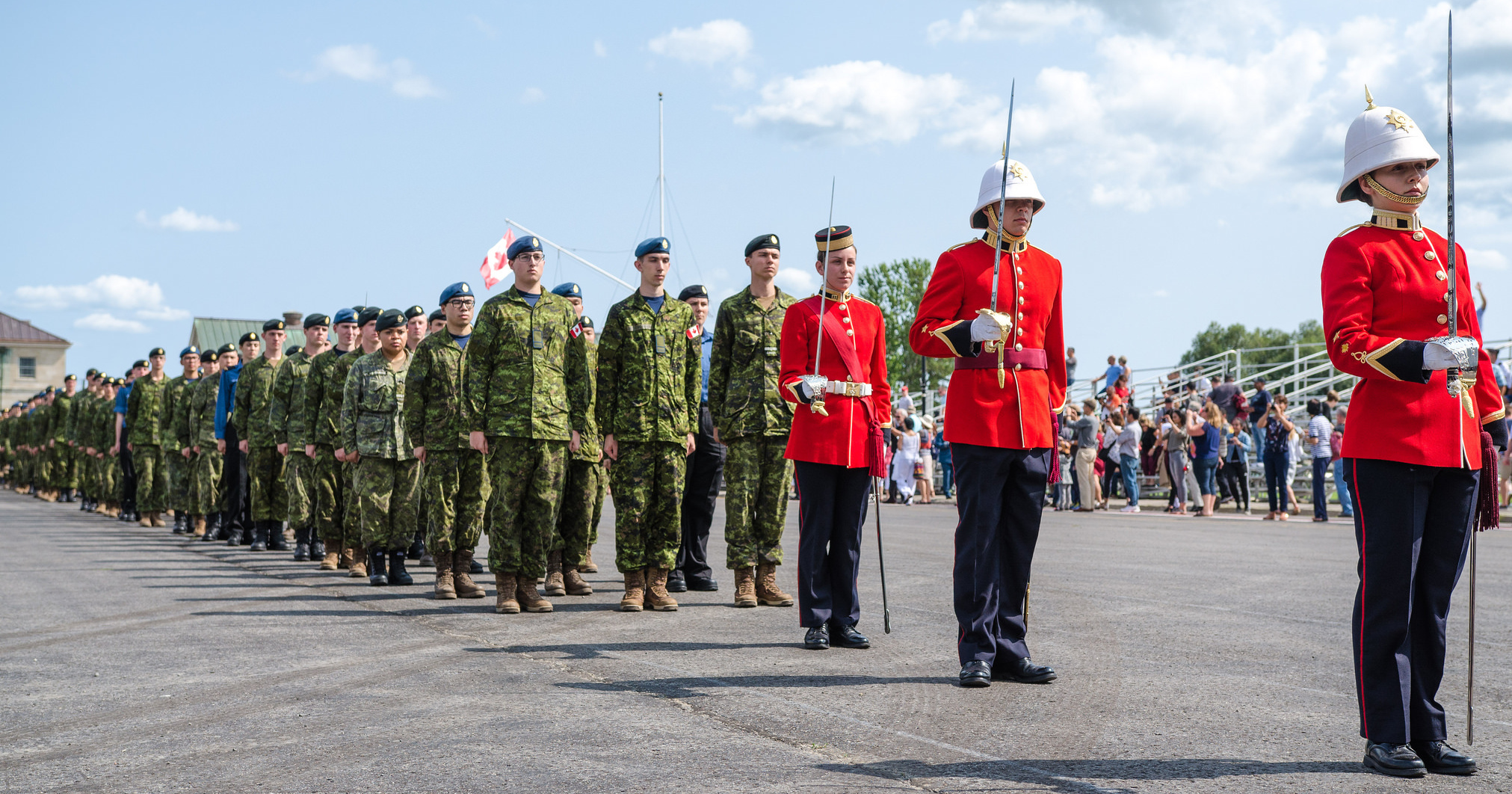 The Arch Parade and the Beginning of FYOP

After some lengthy goodbyes and final exchanges of both tears and smiles, the Class of 2021 formed up in the parking lot of the Kingston Military Community Sports Centre (KMCSC) in their new first year flights, eager to step off and begin their First Year Orientation Period (FYOP) journey.

The FYOP Cadet Flight Leaders (CFLs) stood in front of their newly formed flights, dressed in sharp scarletts and carrying polished swords. At the beat of the drum, the parade stepped off and began the march towards the historic Memorial Arch.

The ‘march through / under the memorial arch’ has a nice history which we hope to cover in a future Issue of e-Veritas.

After marching underneath the arch, the cadets proceeded to the parade square. Following them were hundreds of proud friends and family members. This reporter was almost trampled by the droves of people eager to watch their beloved new cadets officially begin their FYOP. 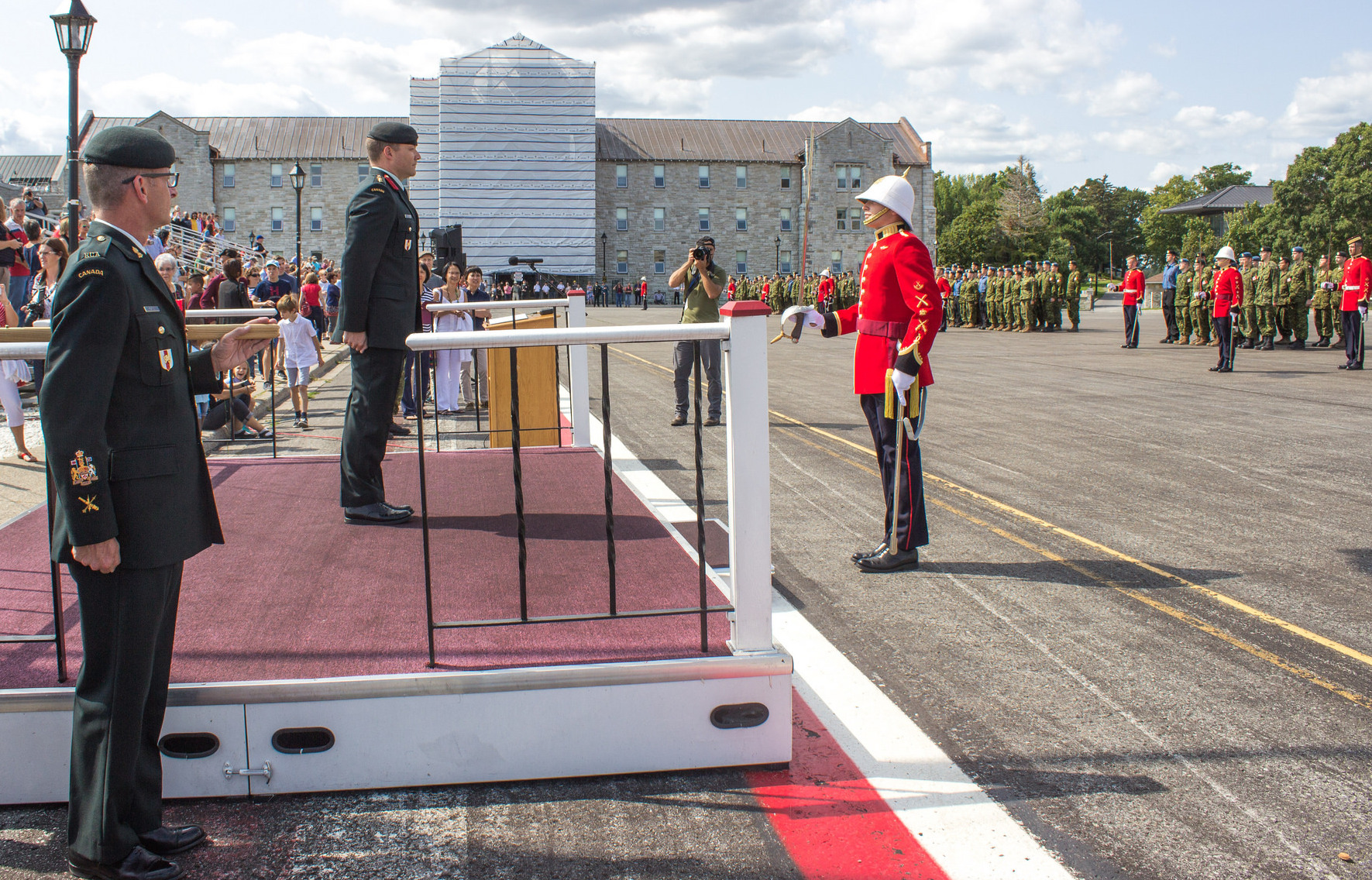 Upon arriving on the parade square, the Director of Cadets, Colonel Chris Ayotte, addressed the parade. His remarks were brief, but eloquent and he stressed the importance of teamwork, mental resilience and physical fitness as the keys to success during FYOP.

When he finished his remarks, the DCdts turned the parade back over the Cadet Wing Commander, OCdt Ryan Harding, who in turn officially handed authority over the Class of 2021 the FYOP staff. The FYOP IC, OCdt Annie Mercier, then dismissed the parade. 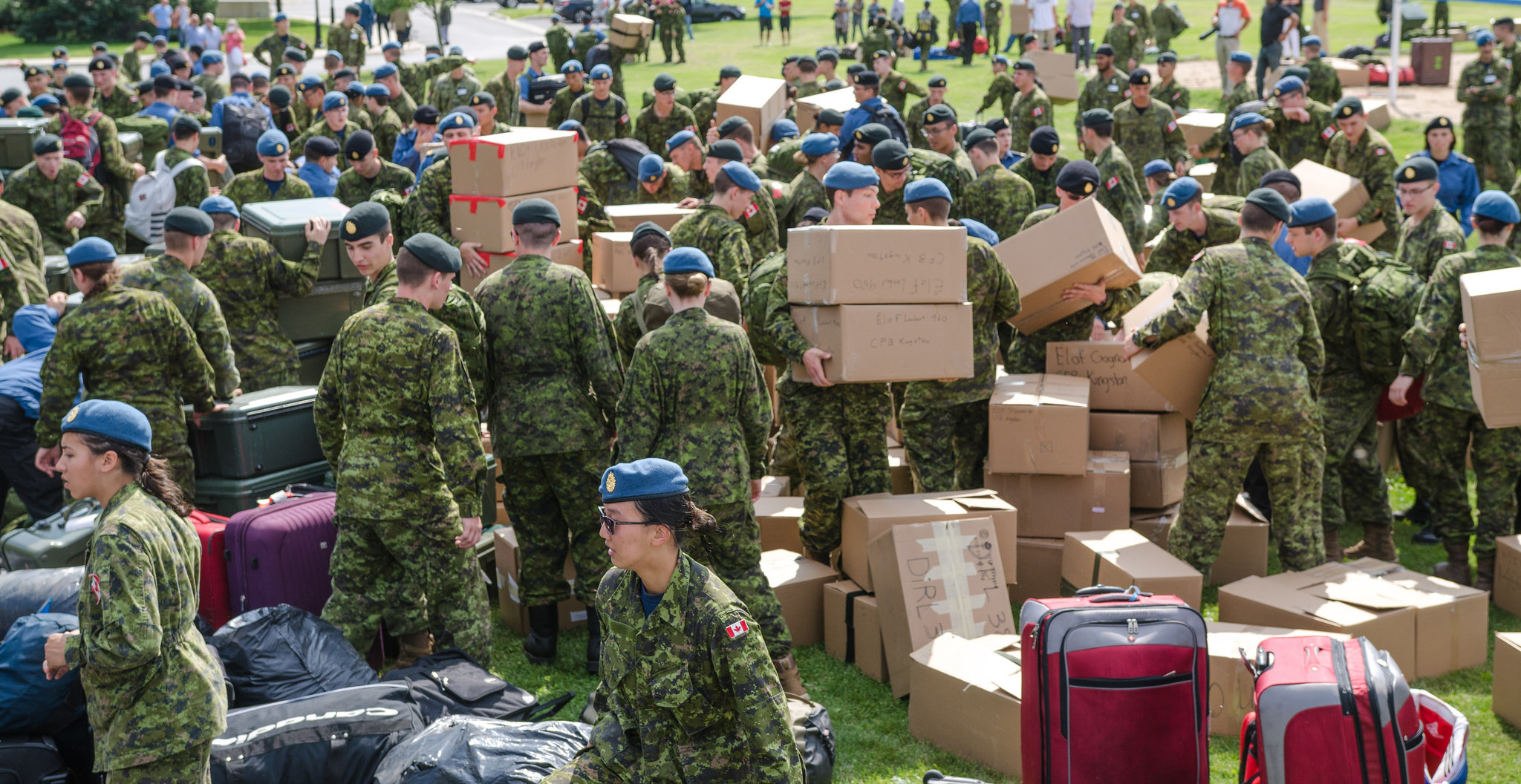 After the pomp and ceremony ended, the pandemonium began. The more than 200 new members of the College were then told to quickly collect their luggage and move into their new rooms. Faster than a herd of wildebeests, the Class of 2021 sprinted across the rugby field and began the chaotic process of sorting hundreds of boxes, bags and bins of all sizes.

Under the direction of their FYOP, the first years worked fast. Many were carrying three or four bags back to their rooms. Once again, this poor reporter threw himself in the middle of harm’s way to get the exclusive scoop.

After the luggage was cleared, the first years moved to their respective squadron lines and began the process of moving in. Friends and family were invited to the Senior Staff Mess for a nice reception, which was attended by Colonel Ayotte and members of the military training wing..

Over the course of the next month, the first years will be challenged physically and mentally through FYOP. They will bond and learn to work as a team. Today represented the first step towards their new life as Canadian Armed Forces officers. A life filled with challenges and incomparably rewarding experiences. 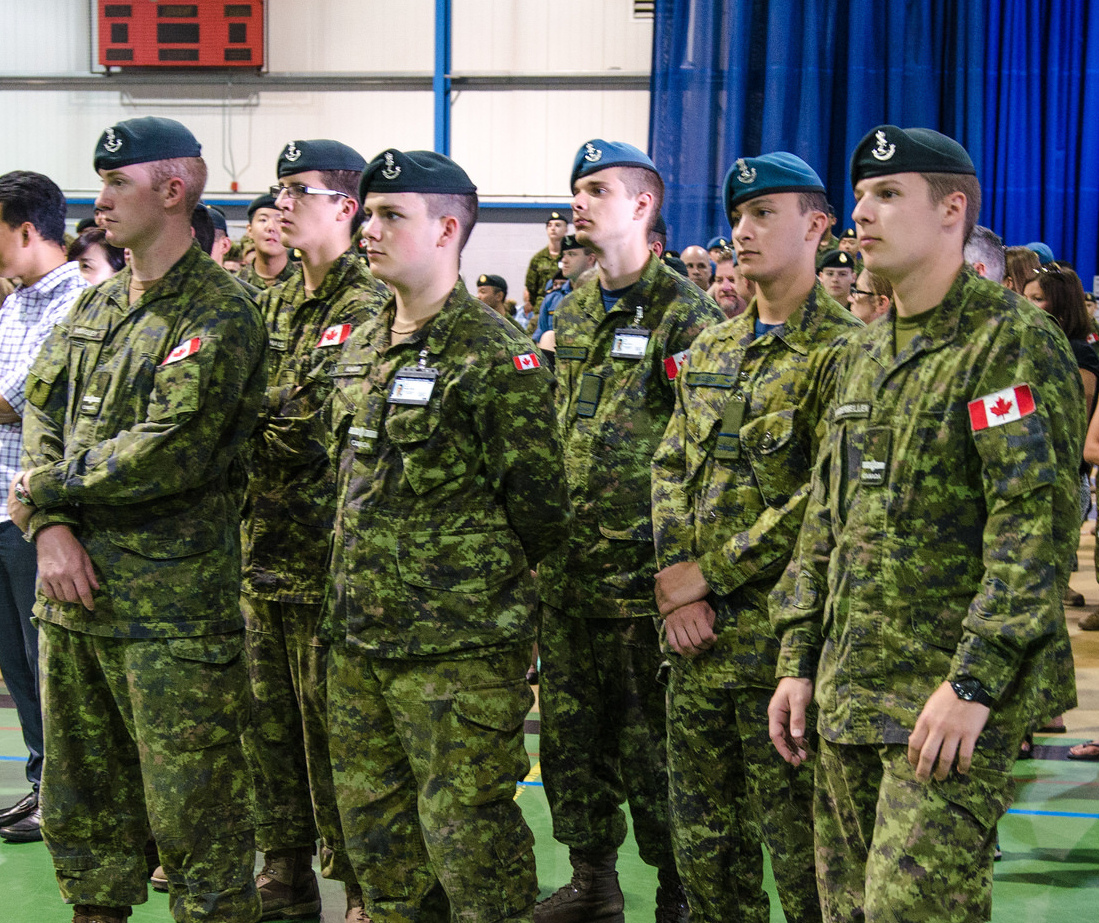 Class of 2021 and the RMC St-Jean Connection

On the 26th of August, hundreds of officer cadets participated in the arch parade. This parade signifies cadets becoming a part of the college until they march out on graduation, and is one of the first memories many cadets have of the Royal Military College of Canada.

CMR was closed in 1995 as the military downsized, but in 2008 the college was reopened to how for academic pre-requisites and extra training to be offered to cadets that were either lacking the entrance standards. After cadets have finished 1-2 years at RMC St-Jean, depending on their academics, they are transferred to RMCC so that they may complete their degree.

The most significant difference when changing colleges from Saint-Jean to Kingston is the size. RMC St-Jean has a student body of around 200, whereas RMC is around 1000, with 800 being full time cadets. “It’s like a family even,” said OCdt Audet, “We’re so small.” Saint Jean also has a very small teaching faculty, which offers a more intimate classroom setting.

One of the major benefits of RMC St-Jean is the “prep” year, which allows for junior cadets to learn and practice leadership with a professional command team. “I got to watch people lead and then lead myself,” said OCdt Servant.

During the following weeks, the former RMC St-Jean cadets will be getting their bearings on the college and getting set up in their respective squadrons. This adjustment period takes quite a long time, but with the help of their flight the process can be expedited.

To all the new RMC St-Jean cadets that have arrived in Kingston: Make the best of your time at the college and remember your motto: Verité, Devoir, Vaillance. 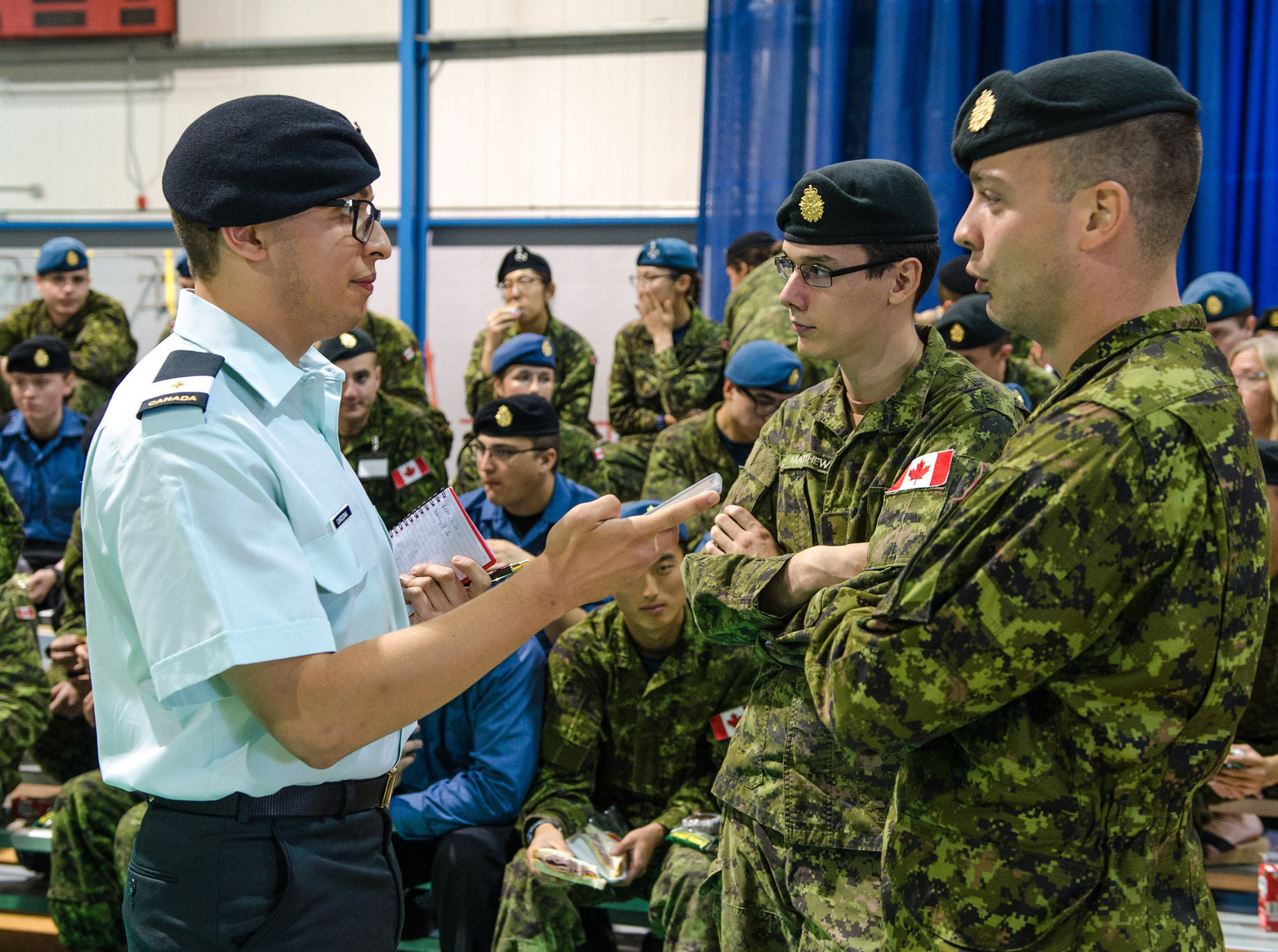 OCdt Cardona interviewing newly arrived cadets from the class of 2021

2021 In Their Own Words: Pre-Arch Parade

Prior to the beginning of the Arch parade, the Class of 2021 congregated in the  Kingston Military Community Sports Centre (KMCSC field house where they assembled their baggage and said goodbye to their friends and family. They will not be allowed to see their family, or anyone from outside the College for that matter, until the FYOP obstacle course in four weeks’ time.

Eager to get the perspectives of the friends, families, and cadets themselves, this fearless reporter ventured deep into the heart of the first year arrival to collect their thoughts. Below are some quotes that summarize the afternoon’s mood:

“Today’s event where all the new first years are arriving is a day of transition. It’s a day where parents and the cadets are all trying to figure out what comes next and as somebody who looks after the wellbeing in general it’s a matter of helping through the transition and help them manage the change to military lifestyle.”

“I joined [RMC] because the degree, the Bachelor’s of Military Studies looked very interesting to me and it’s literally the only place in Canada where I can get that. I like the military, I enjoy the feeling of being stressed.”

“I’m very proud of my son, he’s following his lifelong dream to be a pilot and we’ve steered him in the direction of the military and RMC. He accomplished every goal that he wanted to do and it’s nothing but pride today to see my son off.”

“I’m most looking forward to the teamwork, the responsibility that I’m going to accumulate here and the challenge of FYOP.”

“It’s an emotional time, but it’s also a very proud time to see [my daughter] pursue this.”

MORE PHOTOS FROM THE ARRIVAL OF THE CLASS OF 2021- HERE