Rolande and I had the opportunity to attend a very highly entertaining Depart With Dignity function last Monday, 28 August for 13846 Colonel Kevin Bryski, OMM, CD at the Hylands Golf Club in Ottawa.

It has been over 40 years since, I’ve visited the Hylands G.C.; I was impressed with it in the 1970s, I’m even more impressed now!

The event featured a fun best-ball golf tournament followed by a lunch, cake cutting and presentations.

For those of us who have known the native of, Rokeby, Sask over the years it came as no surprise that ‘all the bases’ would be covered in this his farewell to the RCAF. For example – he changed sports jerseys for each presentation that represented a lot of the sports teams that he played on; including his last military hockey squad, the Offutt Air Force Base Marauders that was signed by each of his teammates.

The highlight of the well organized event was the emotional address delivered from the heart where Kevin recognized those who were his mentors over his career including his superiors, subordinates and the civilian members of the Defence Team.

The ever thoughtful retiring Colonel also paid tribute to four serving CELE(Air) officers by presenting them his rank slip-ons and wished that they also reach their personal professional goals.

The proud husband of 25 years and the soft-spoken dad also recognized the support of his wife Michelle and children Ky and Tesia.  He zeroed in on the 16 F&E moves that they did in Canada and Europe, as well as the tremendous support provided by all three, in particular, during his year-long deployment with the US Army to Kandahar. 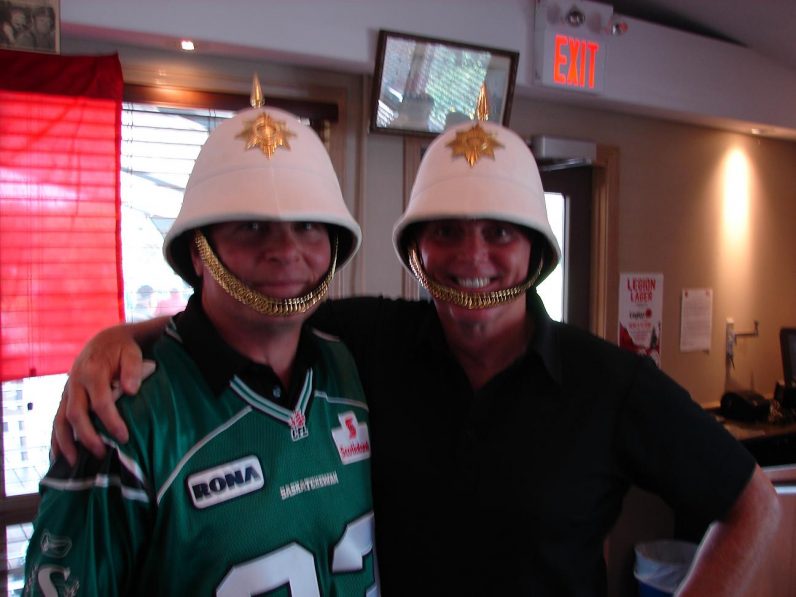 A very animated and highly amusing career summary was provided by the Master of Ceremony, 11766 (Col ret) James P. Doherty. In just one of his many personal touches a.k.a. skits, James, contacted RMC QM stores to borrow a couple of Pith Helmets (I was the delivery boy). We don’t have enough space in this article to deal with the skits. Trust me – they were good!

Recognizing Kevin’s work in the space domain, James who in his day job, is the Program Lead for Astronomy & Planetary Missions at Canadian Space Agency, presented him with a set of custom-made cuff-links made with 4.5 billion year-old meteorite.

(Feature photo) The 38 year military veteran was presented, with his family at his side – the Certificate of Service from his RMC 1983 classmate and Redmen football teammate, 13551 LGen (ret) Guy Thibault.

Letters were received from many of his former RCN (where he served for five years) and C&E Branch instructors and from the Premiers of Ontario and Saskatchewan, Mayor of Ottawa and the Consul-General of Canada in the upper mid-west of the United States.

About 75 people were in attendance entertained often by the colourful and imaginative MC over three hours.

Attendees included:  friends, colleagues, neighbours, former hockey team-mates, windsurfing buddies and personnel from his former units (notably CF Crypto Maintenance Unit in Kingston and 76 Communication Group) that attended, other in attendance included 11 members of the RMC Class of 1983 and two US military veterans who travelled from Omaha, Nebraska and represented US Strategic Command.

A number of messages from those who were unable to attend were cited, which included a video tribute from Kevin’s mother Jean Bryski all the way from her home in Yorkton, Saskatchewan.

Major A. R. (Andy) Wood was the ‘behind the scenes’ organizer for this special event.  A number of very nice touches were evident throughout the whole affair undoubtedly coordinated by him. A special tip of the cap to, Andy, who indeed made it special.

From a personal point of view we recognized a number of Ex Cadets – we already mentioned that there were 11 from the Last Class With Boxing. They were all in III Year, during our first posting to the college in 1981-82.

We especially enjoyed sharing a table with – Guy Thibault, Chris Deere, Ross McGowan and a few others who we didn’t get a chance to exchange pleasantries.

So what does an energetic, highly skilled, still in his prime years retired RCAF Colonel do for an encore?

Kevin, will likely be taking some time off (hitting the links, often – no doubt) and then setting up a consulting company in space, cyber and strategic deterrence areas. There is even some strong talk that he and Michelle will end up back in the Comox Valley in the not too distant future.

Rolande and I both agreed what a grand way to spend a late summer afternoon. We were very glad we made the trip to Ottawa and back to Kingston on the same day. 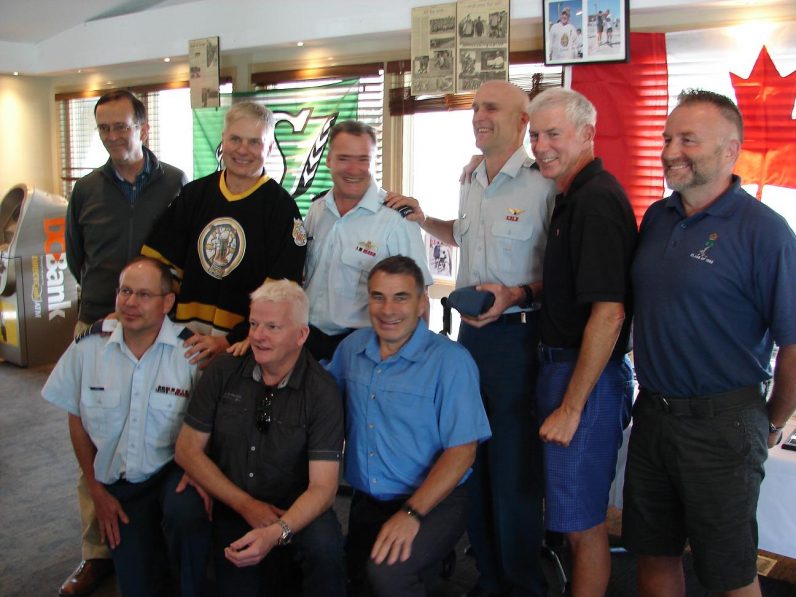 Photo of RMC classmates with Kevin who attended -L-R names are:

Not shown are Ross McGowan, Gerry Pratt and Marc Dussault.

Looking back 49 years: Toronto Maple Leafs and the RMC connection