After a relatively quiet summer, the Royal Military College of Canada celebrated the arrival of close to 300 new First Year Naval and Officer Cadets (N/OCdts), University Training Plan Non Commissioned Members (UTPNCMs) and the Second Year N/OCdts from Royal Military College Saint-Jean with the ‘March Through the Arch’ this past Saturday, 25 Aug.

The day started out quietly enough as those new to the College mingled with their families in the Field House of the Kingston Military Community Sports Centre. They ate boxed lunches in what was, for many, the most relaxed meal they’ll have for the next few weeks. The First Years were, on the whole, understandably apprehensive. When asked by e-Veritas to comment on how they felt, many declined to give their names and stated simply that they were nervous about what lay ahead but were excited to finally get started. OCdt (I) Emily Ford stated that she was “not really sure what to expect. I’m just taking it hour by hour right now.” And OCdt (I) Noah Maklin-MacCallum said, “Overall, I’m excited. Pumped. I can’t wait to experience the traditions and the various activities that the different years get to do.”

Those Cadets transferring in from CMR-SJ had different feelings about the occasion. 28548 OCdt (II) Perigo told e-Veritas he’s actually been in Kingston for two weeks now with the Varsity Rugby team and has enjoyed a pleasant welcome into 5 Sqn. “It’s like a family,” he said. “Everyone has been super-welcoming. They’ve been really keen to show me around both at the College and in town.”

Many of the parents in attendance had a military college connection. For example, 19347 Andy Harris (RMC 1994) was in attendance to see his son march through the Arch. He said of the experience, “It’s really nostalgic for me. And it’s interesting to see all that’s changed and all that’s stayed the same.”

When the time to mingle was over, the Cadets formed up in their respective flights and marched through the Arch and on to the Parade Square, following in the footsteps of so many who have gone before. And while their drill might not be quite up to College standards just yet they are, as Director of Cadets Col Ayotte told them, at the start of their journey. 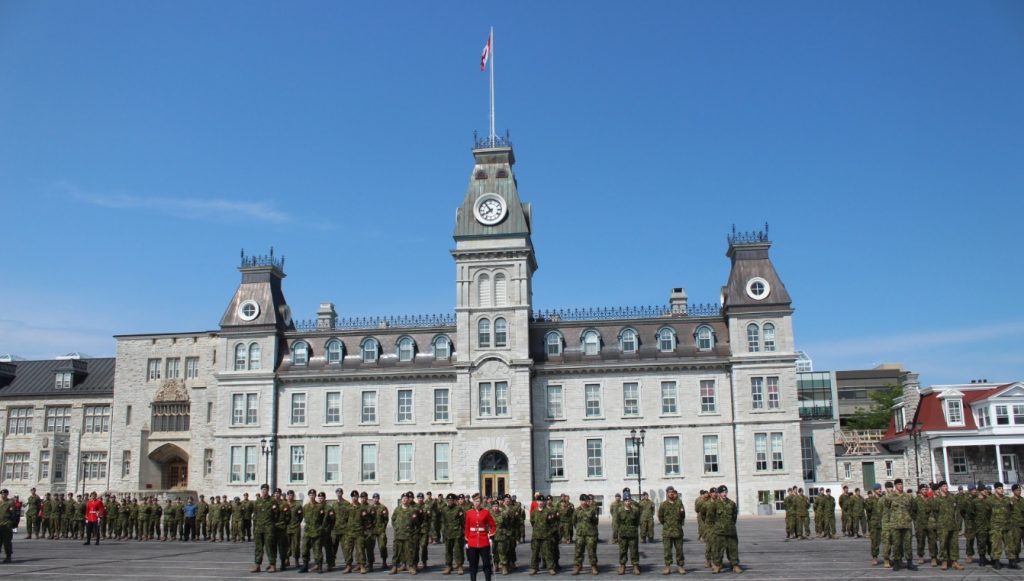 “Today marks the start of your journey,” he said, “to becoming officers in the Canadian Armed Forces and also the start of an incredibly challenging four years.” Their development, he went on, “will be gradual. The First Year Orientation Program will prepare you for the rigors of life at the College. You stand today as individuals, but when you finish the obstacle course in three weeks’ time you will do so as fit, motivated members of this 142 year old institution.” 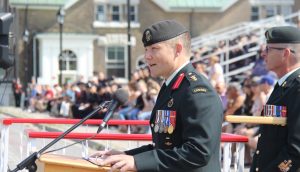 Col Ayotte also took the time to address the family members present for the occasion. He acknowledged the trust the families have placed in the College. “We do not take this responsibility lightly,” he said. “Thank you for trusting us with your family members.” He also recognized the role family members play in helping Cadets make it to graduation. “I would ask you to encourage them in the coming months,” he said. “To remind them that ‘You can succeed here.'”

Col Ayotte closed out his remarks by observing to the Cadets on parade, “Your journey starts now.” And things moved very quickly indeed after that. The Cadets marched off the Parade Square to in front of the barracks and from there were dismissed to the far side of the field to organize and pick up their kit. Controlled chaos ensued as family and friends looked on, many of them with knowing smiles.

The First Years moved through the process to the encouragement of their staff. Cries of “No standing around!” and “Let’s go!” rang out along with helpful observations such as “You’re a team! Start working as one!”

This chaos, designed to instill a sense of urgency, was but a taste of what lies ahead for the Class of 2022. Their journey to graduation has now begun. 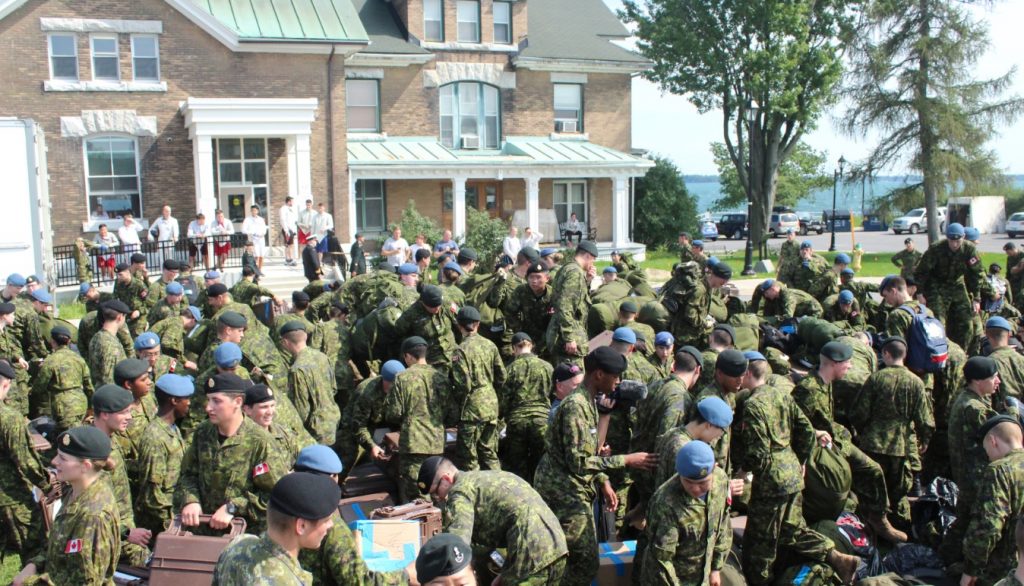